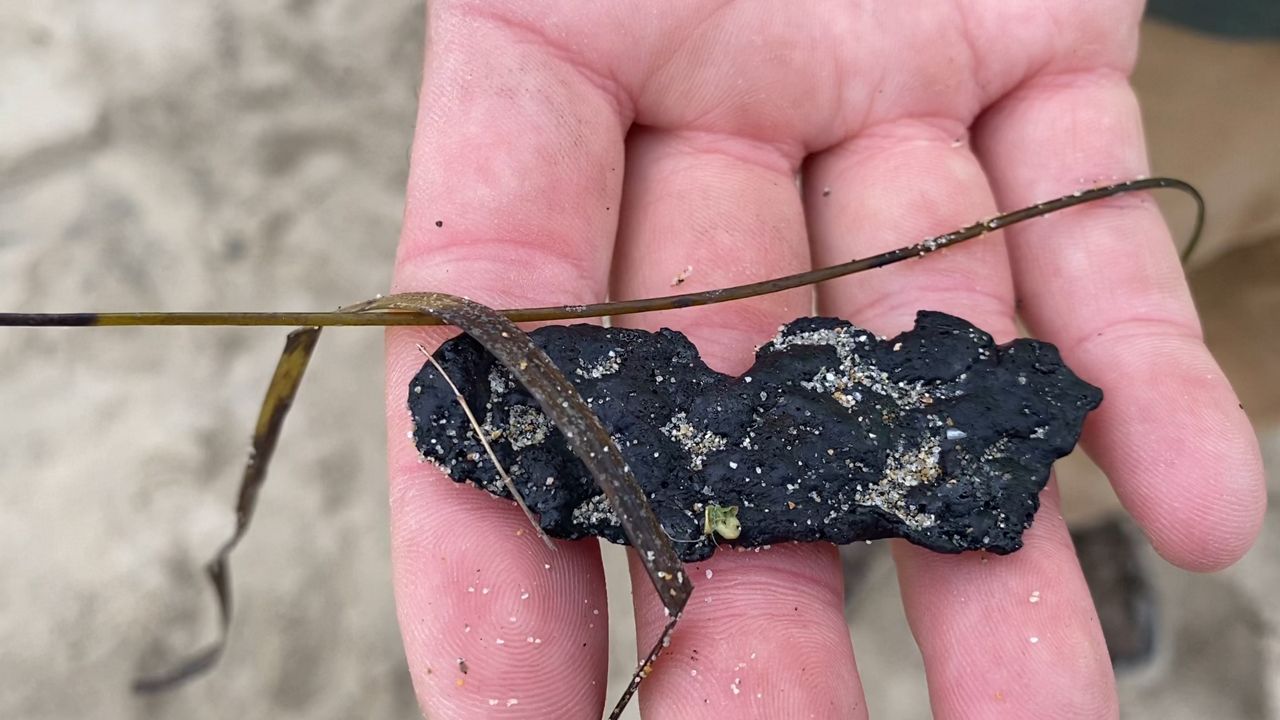 HUNTINGTON BEACH, Calif. — Sean Anderson was combing the beach looking for congealed tar, collecting pieces and putting them in small plastic bags. He saw one congealed piece the size of a pancake.

"This is clear evidence that this is not a normal … not a regular event," said Anderson, who is professor and chair in the Environmental Science and Resource Management department at California State University, Channel Islands. He has spent years studying how oil spills impact oceans and wildlife.

Anderson was in Huntington Beach on Wednesday gathering oil to start researching in his lab.

"Once we have an event that's gone on, and we have some time to get our hands around it. We like to actually grab that toxin, in this case oil, and see what specific toxicity this is going to generate."

Anderson and Zach Adkins, a lab technician who works with him, found large and small oil collections from the spill. Anderson said that they would examine the oil's chemical makeup and see how sand crabs react to it.

Anderson said animals that burrow at the coastline, like sand crabs, small mussels and clams are among the species most impacted by oil spills.

Following the leak, animal rescue teams like the Oiled Wildlife Care Network have been focusing on larger animals like birds. Some have been rescued and are being rehabilitated.

"I'm not too worried about the sea birds, shorebirds and fish. They will be impacted, but I don't think massively. The bigger concern is this oil that's going to build up and be a chronic exposure," Anderson said.

He's seen this type of environmental degradation before, during the 2015 Refugio Oil Spill in Santa Barbara when more than 100,000 gallons leaked into the Pacific from a broken pipeline.

At that time, Anderson researched how small sand crabs were reacting to the oil and monitored the impact over time. He and his lab found that the sand crab eggs exposed to oiled water grew slower, and many were underdeveloped or misshapen. Some adult crabs died upon exposure.

"It's bad for the crabs, but it's also for the things that need the crabs, the birds, the fish," he said.

"We're exploring a possible project that would look at the long term impact of this oil spill on marine microbial communities," she said.

Tavares explained that her lab was looking at phytoplankton and how the oil spill of the Southern California coast could change different species' growth patterns.

"We're becoming more aware and have more evidence for how these components from fossil fuels can have these broader effects on the structure on communities [of marine life]," she said.

Anderson is concerned about this latest spill, but as he dug through piles of seaweed dotted with spots of tar along with small pieces of Styrofoam and plastic, he reflected on the many stresses plaguing ocean life.

"Even when we have an oil spill, that's not the end of the world, it's not going to kill everything up and down the coast, it's yet another assault. And it's a reminder that we need to do things better and we can do things better."