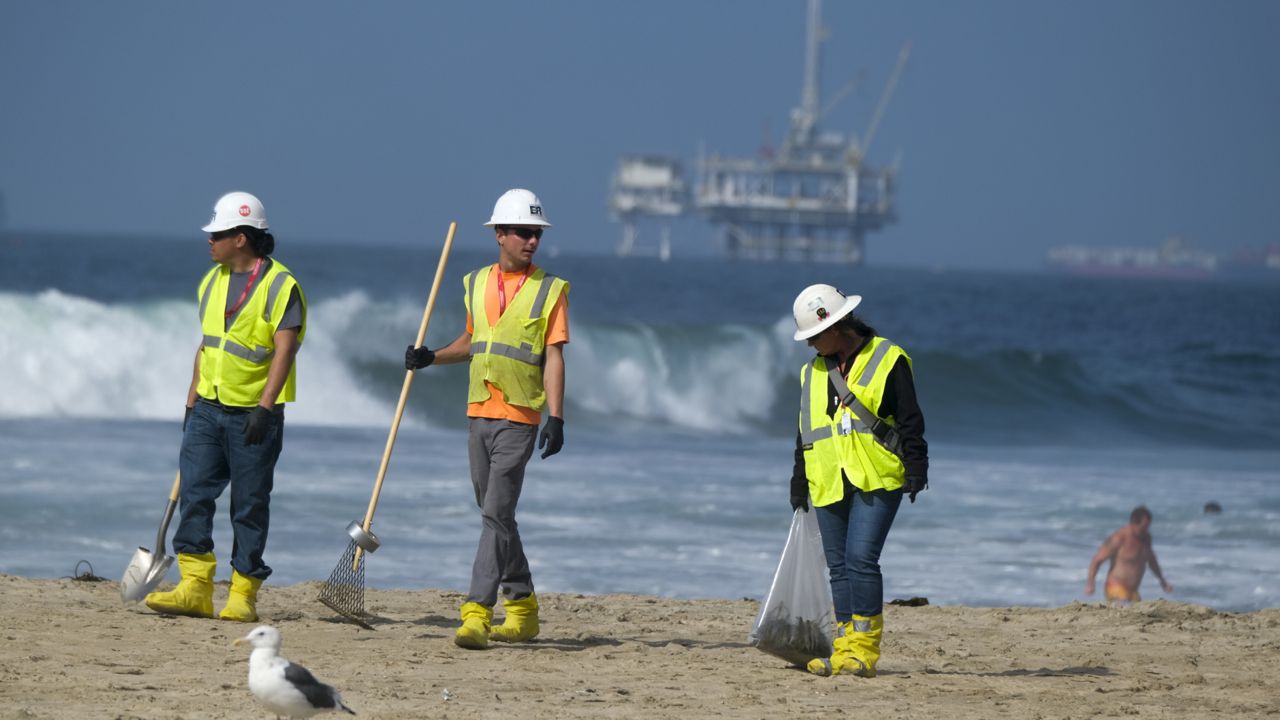 HUNTINGTON BEACH, Calif. (CNS) — As cleanup work continued and more Orange County beaches reopened, state officials announced multiple inquiries into the cause of an oil leak off the shores of Huntington Beach, with pledges of ensuring it won't happen again.

Attorney General Rob Bonta and Sen. Alex Padilla, D-California, toured the site and received a briefing from Coast Guard officials Monday before Bonta announced his office is investigating the leak to determine if any civil or criminal action is warranted.

"We're doing an investigation," Bonta said. "We are determining whether civil or criminal enforcement action is appropriate. ... We are prepared to do what is necessary to get a full accounting of what happened."

Although the leak occurred in federal waters, Bonta said his office had the authority to conduct civil or criminal probes.

"We represent multiple agencies and departments that have an interest such as parks and recreation, fish and wildlife, the coastal commission, state lands," Bonta said.

He noted Orange County District Attorney Todd Spitzer was also doing an investigation and that his office was collaborating with those prosecutors.

But, Bonta added, "We can't get to the liability and burden of proof until we know what the facts are."

The senator added that, "Today is a critical day. You can feel the wind. The weather could turn up additional pockets of oil. We just don't know. The good news is we have plenty of resources. ... The progress looks good thus far, but we don't want to take anything for granted."

Rendon echoed that point at a separate news conference Monday, saying the oceanfront is not only "gorgeous," but, "Our ocean is also a life giver."

"Now we need to guarantee it will remain safe and clean," he said. "It's not only an environmental question, but an economic question. How do you have a Surf City USA that people can't go surfing at?"

Rendon said he created the select committee at Petrie-Norris' request.

"We need to address our dependence on carbon fuels," Rendon said. "And that's not just looking at off-shore drilling."

He said all oil drilling needs to be analyzed.

"Time and time again we find ourselves fighting to make sure those extracting resources from California are protecting what's here. We need to assign accountability for this incident and assure it is not repeated," Rendon said.

Petrie-Norris said the committee was an "important step to assure that we get to the bottom of this tragedy and to assure we have oversight and accountability on the state level."

She said there were many "unanswered questions" about the response to the leak by Amplify Energy, the company that owns the oil rig and pipeline involved.

"We want to make sure we learn lessons from the tragedy," she said. "But I don't have to tell anyone that you don't need a select committee to learn the fundamental lesson from this tragedy. We are calling for an end to off-shore drilling. And we're also calling for an escalated time line of existing production and extraction."

Huntington Beach Mayor Kim Carr said it was "imperative that this incident is looked into from all angles and that measures are taken to prevent it from happening again."

She said she was "happy to see the progress being made in the cleanup efforts" that was "exemplified by the reopening of our beaches."

She said the city would continue testing twice a week for the next couple of weeks to make sure the water was still safe.

Orange County Supervisor Katrina Foley said it was "amazing what working together can accomplish in a short period of time."

Officials continued to warn the public not to handle any tar balls they may encounter on the sand. Oil contains hazardous chemicals, and beachgoers who encounter tar balls were encouraged to email tarballreports@wildlife.ca.gov. If skin contact occurs, they are advised to wash the area with soap and water or baby oil and avoid using solvents, gasoline, kerosene, diesel fuel, or similar products on the skin. Officials say these products, when applied to skin, present a greater health hazard than the tar ball itself.

According to data provided Sunday afternoon by the Unified Command handling the cleanup effort:

The Unified Command responding to the leak that was first reported Oct. 2 is headed by the U.S. Coast Guard and also includes officials from Orange County, San Diego County, the California Department of Fish and Wildlife and Amplify Energy Corp.

Meanwhile, the Oiled Wildlife Care Network reported that its responders had recovered 58 species impacted by the spill as of Sunday, 50 birds and eight fish. Twenty-six of the birds were recovered alive, but all eight of the fish were dead.

The organization was doing extensive recovery from Long Beach Harbor to Oceanside, field stabilization at the Wetlands and Wildlife Care Center in Huntington Beach, and primary care at the Los Angeles Oiled Bird Care and Education Center -- home to International Bird Rescue.

Officials said no oiled wildlife has been located in San Diego County. For the latest wildlife information, go to owcn.vetmed.ucdavis.edu/pipeline-p00547-incident.

The leak was reported on the morning of Oct. 2 a few miles off the Huntington Beach coast, although some boaters reported smelling something in the water on Oct. 1.

Authorities initially estimated that as much as 144,000 gallons of oil may have leaked from the damaged pipeline, but officials said Thursday the actual amount is likely much lower, although there is still no firm number. At a news conference Thursday afternoon, USCG Capt. Rebecca Ore estimated that roughly 588 barrels of oil had spilled, which would equate to about 24,700 gallons. That's being considered a minimum amount leaked, with officials estimating a maximum potential of around 130,000 gallons.

Amplify CEO Martyn Willsher insisted the company was unaware of any release of oil into the ocean until about 8 a.m. Oct. 2, adding that the firm responded and reported the incident immediately.

The U.S. Department of Transportation's Pipeline and Hazardous Materials Safety Administration's Office of Pipeline Safety issued a corrective action order last week, saying workers in the company's control room "received a low-pressure alarm on the San Pedro Bay Pipeline, indicating a possible failure at about 2:30 a.m. Saturday (Oct. 2)," but the pipeline carrying crude oil was not shut down until about 6 a.m.

Asked repeatedly about that timeline during a media briefing in Huntington Beach, Willsher only said the company was cooperating fully with federal and local investigators.

Meanwhile, the Coast Guard's lead investigator said Friday the ruptured underwater pipeline might have been damaged several months to a year ago, adding that it's unclear when the 13-inch crack in the line occurred or when oil began seeping into the water.

Capt. Jason Neubauer said underwater video of the damaged 17.7-mile pipeline shows "marine growth" around the crack in the pipeline that was left exposed when its concrete casing was ripped away, likely by the strike of a ship's anchor that hooked the line and dragged it 105 feet out of place.

Investigators were analyzing the maturity of the vegetation to give them a clue as to when the pipeline was initially struck and lost its protective concrete casing. Also unclear is exactly when the crack in the pipeline occurred. Neubauer said the pipe may not have ruptured when a roughly 4,000 foot section of it was originally pulled out of place and stripped of its concrete casing. Or a small crack may have occurred that gradually got bigger over time, leading to the 13-inch fissure now present in the pipe.

Neubauer also said the pipeline may have been struck multiple times over the past year, and investigators were also examining whether recent earthquakes may have contributed to the damage.

Willsher said the pipeline is a 16-inch steel pipe covered in concrete, indicating it would take a great deal of force to move and rupture it. He said the pipeline was "pulled like a bow string," lending credence to the possibility of a ship's anchor catching and dragging the line.

The National Transportation Safety Board will also conduct an investigation that will be coordinated with the Coast Guard to avoid redundancies, said Andrew Ehlers, the chief investigator for the probe.

The spill occurred in federal waters at the Elly oil-rig platform, built to process crude oil from two other platforms, which draw from a large reservoir called Beta Field. Elly is one of three platforms operated by Beta Operating Co., which is owned by Amplify Energy and also operates Ellen and Eureka nearby. Elly processes oil production from Ellen and Eureka and is fed by some 70 oil wells. The processing platform separates oil from water.

Elly is one of 23 oil and gas platforms installed in federal waters off the Southern California coast, according to the Interior Department's Bureau of Ocean Energy Management. Besides Elly, a processing facility, there are 20 others that produce oil and gas, and two are being decommissioned.

Rep. Mike Levin, D-Dana Point, and Rep. Alan Lowenthal, D-Long Beach, on Friday led a letter signed by 77 other congressional representatives urging House Speaker Nancy Pelosi and Majority Leader Steny Hoyer to make sure the Build Back Better Act continues to retain a ban on any new federal oil and gas leasing off the Pacific and Atlantic coasts and in the Eastern Gulf of Mexico.

Levin is also behind the American Coasts and Oceans Protection Act that would bar any new leasing for oil drilling along the Southern California Coast from San Diego to San Luis Obispo County.

Updates on fishery closures can be found at socalspillresponse.com/fisheries-closure/.