HUNTINGTON BEACH, Calif. — Cleanup efforts continued, and several Orange County beaches remain closed Wednesday due to the oil spill over the weekend from an oil rig in Huntington Beach.

One of the local areas seriously affected by the oil spill is the Talbert Marsh. According to the Huntington Beach Wetlands Conservancy, the area is home to 90 species of birds, and the nearly 25 acres are used as a rest stop during migration season. 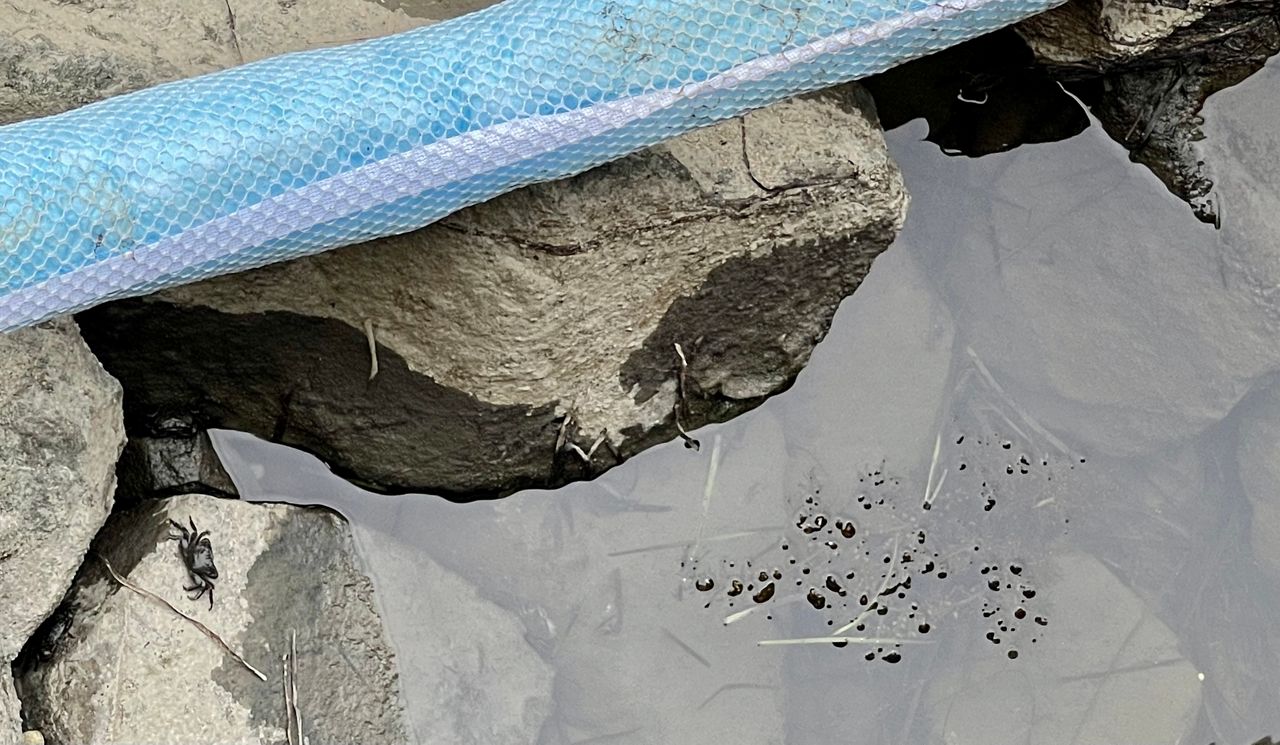 Seen here is a crab on a rock while blots of oil can also be seen in the water to the right of it at the Talbert Marsh Ecological Reserve on Wednesday, Oct. 6, 2021. (Spectrum News/Paco Ramos-Moreno)

Besides the booms currently being used to keep additional oil out of the wetlands, crews are installing aerators to supplement oxygen and compensate for the lack of water flow from the ocean, according to the City of Huntington Beach. 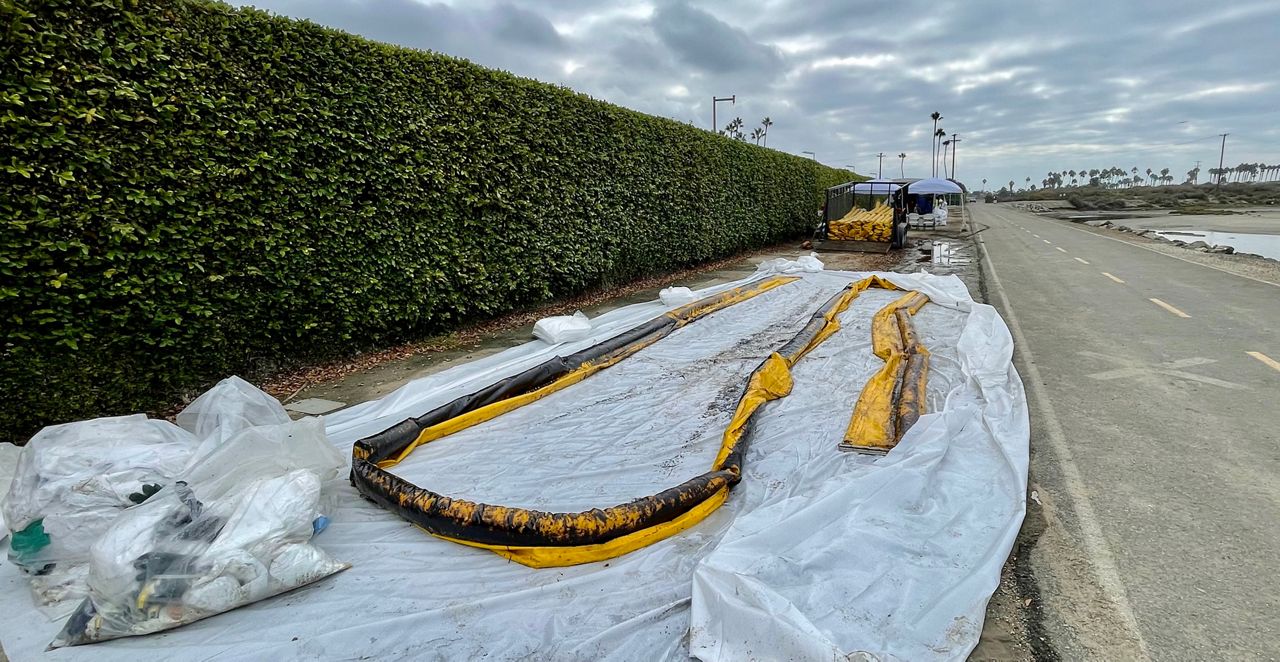 Oil booms like the one seen here covered in oil are being used at the Talbert Marsh in Huntington Beach, Calif. Wednesday, Oct. 6, 2021. (Spectrum News/Paco Ramos-Moreno)

The Coast Guard earlier this week said nearly 144,000 gallons of oil spilled into the ocean, but Amplify Energy Corp. has publicly pegged the maximum amount of the spill at 126,000 gallons.

"We are working with them, giving them all the transparency and information that we have," he said. 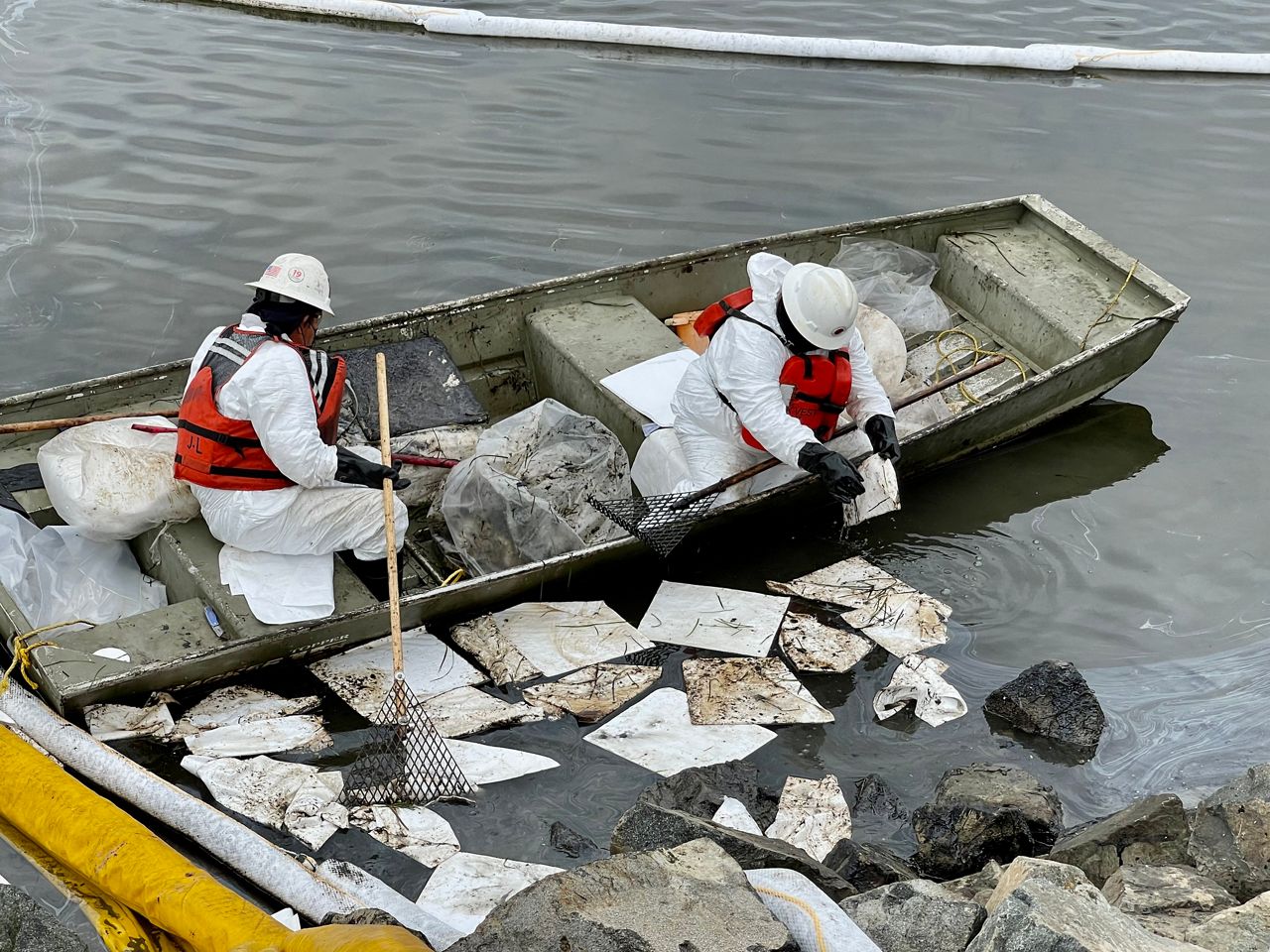 Workers in protective suits use oil-absorbing “diapers” to clean the oil up. (Spectrum News/Paco Ramos-Moreno)

As of Wednesday, seven aircraft, 11 boats and 320 people were supporting the cleanup efforts along the Orange County coast. 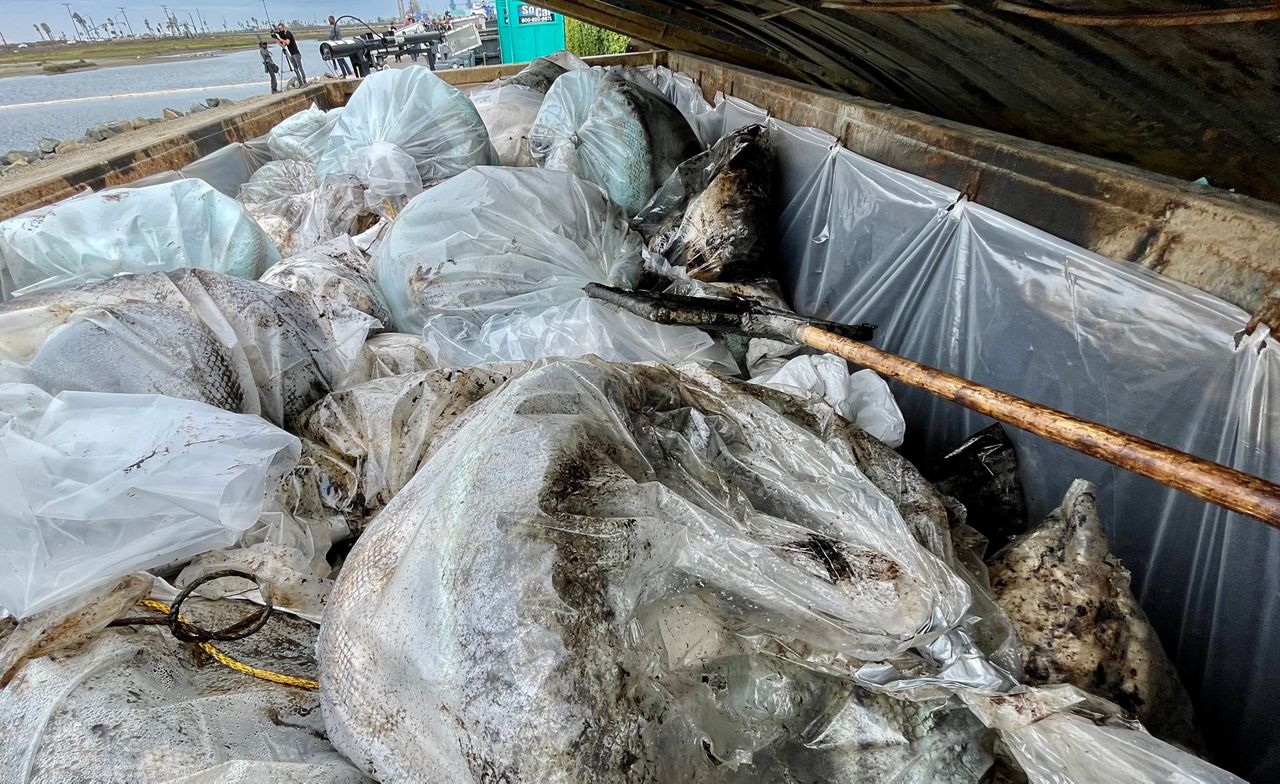 Oil-soaked items used in the cleanup are placed in bags and then discarded. (Spectrum News/Paco Ramos-Moreno)

Residents are asked not to try to rescue any oiled animals, but to instead report injured wildlife by calling 877-823-6926, or 877-UCD-OWCN. 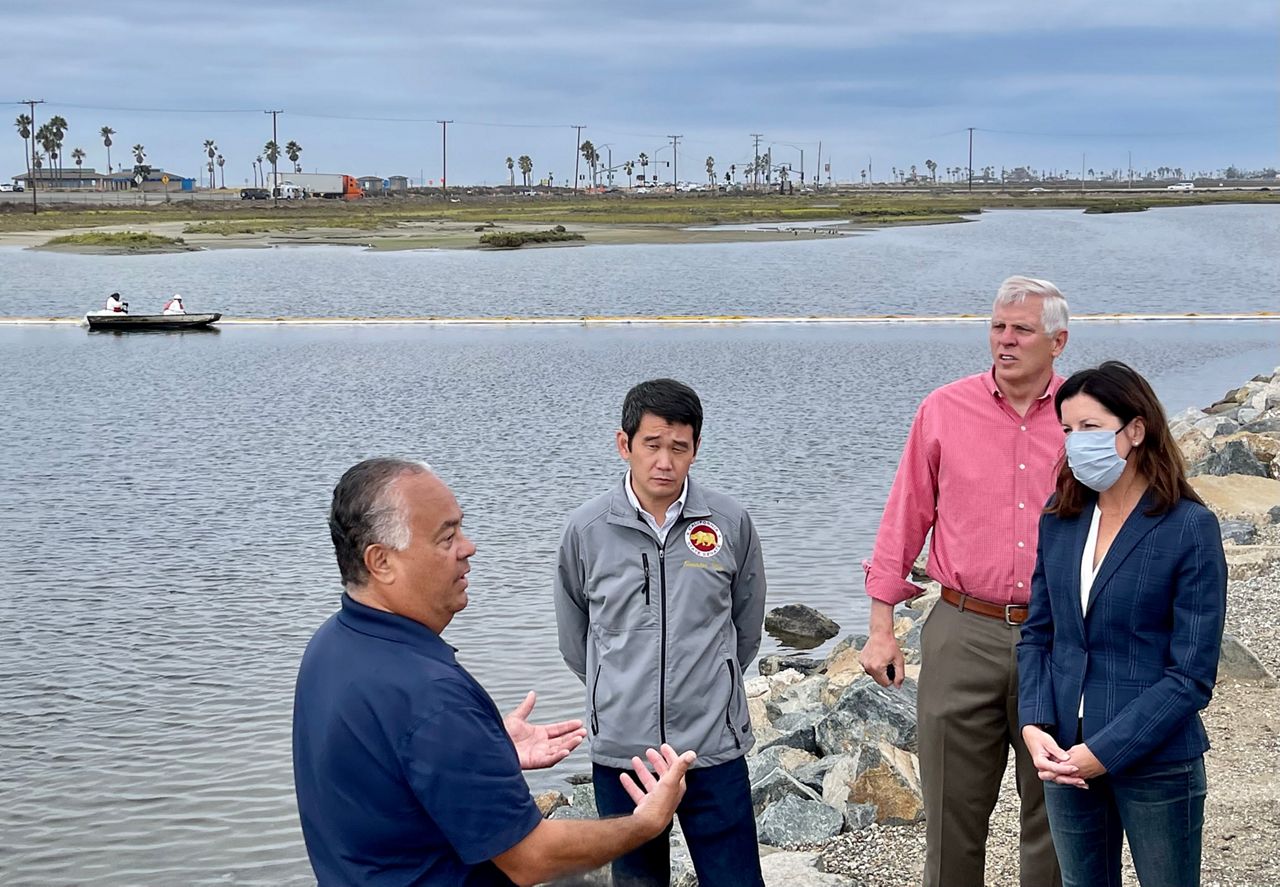 On Wednesday, State Sen. Dave Min, D-Irvine, said the impact along the coastline appears not to be as severe as originally thought, though it's still devastating.

“No matter what we see going forward, this is clearly an environmental disaster,” he said. 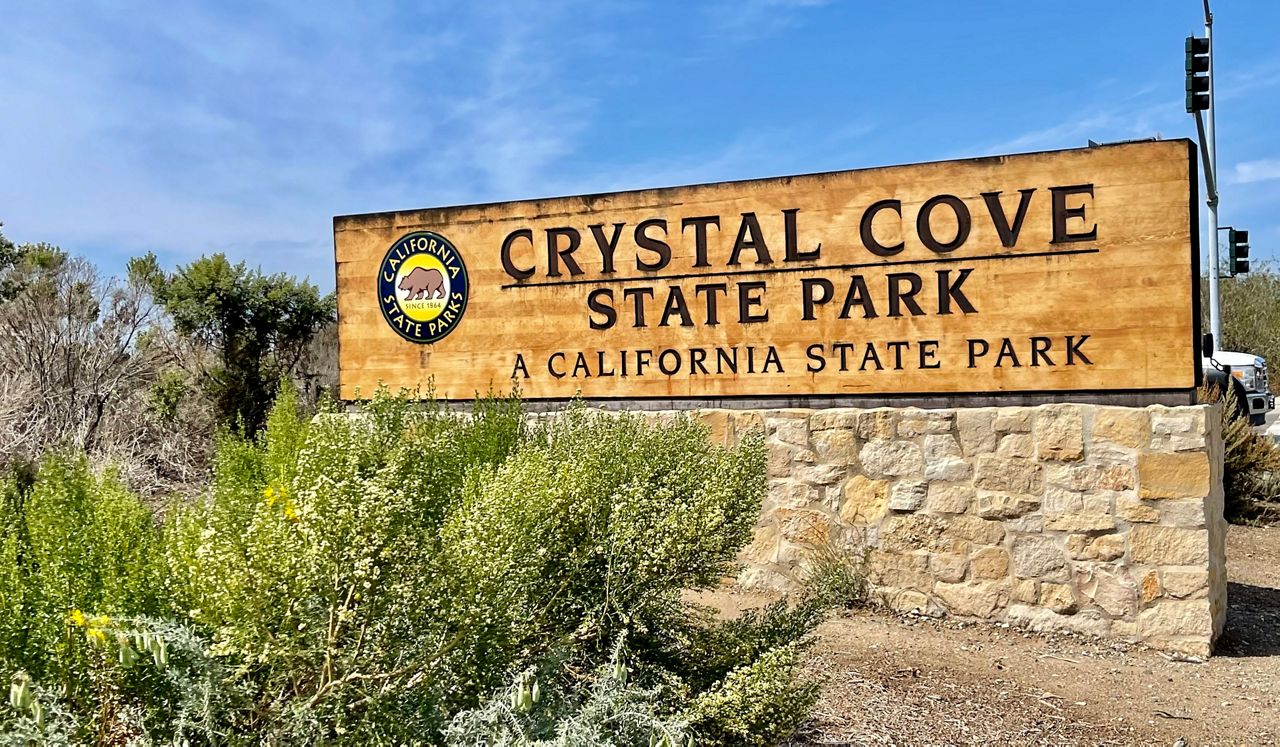 An entrance to Crystal Cove State Park. Public parking remains open, but beach access has been closed off due to the oil spill. Wednesday, Oct. 6, 2021. (Spectrum News/Paco Ramos-Moreno)

Also on Wednesday, the Associated Press reported that Coast Guard Petty Officer Steve Strohmaier said some of the oil has been breaking up naturally in ocean currents while some has been pushed to the south by currents.

The City of Huntington Beach leaders also announced a new website that will contain the latest information regarding the cleanup efforts. 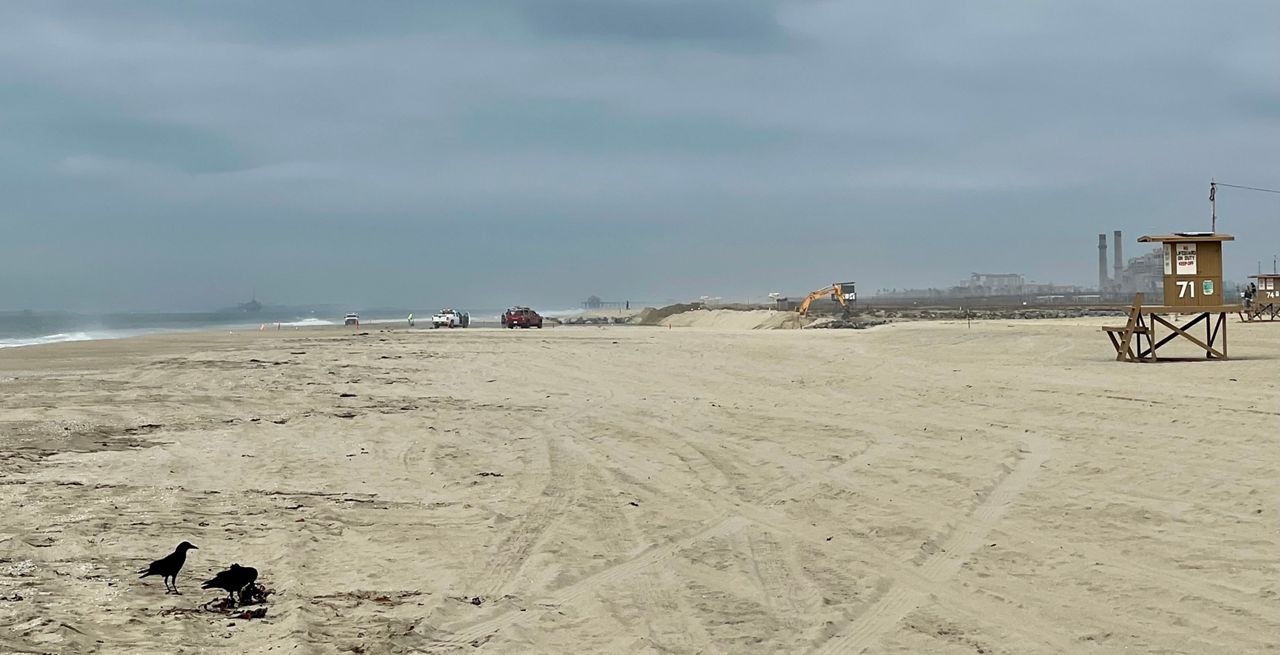 The #OrangeCounty #oilspill hasn't been the worst case scenario that was feared, but the Talbert Marsh is seeing serious impacts from the environmental disaster. https://t.co/waJB5caXsl pic.twitter.com/e0lLRx2KM8