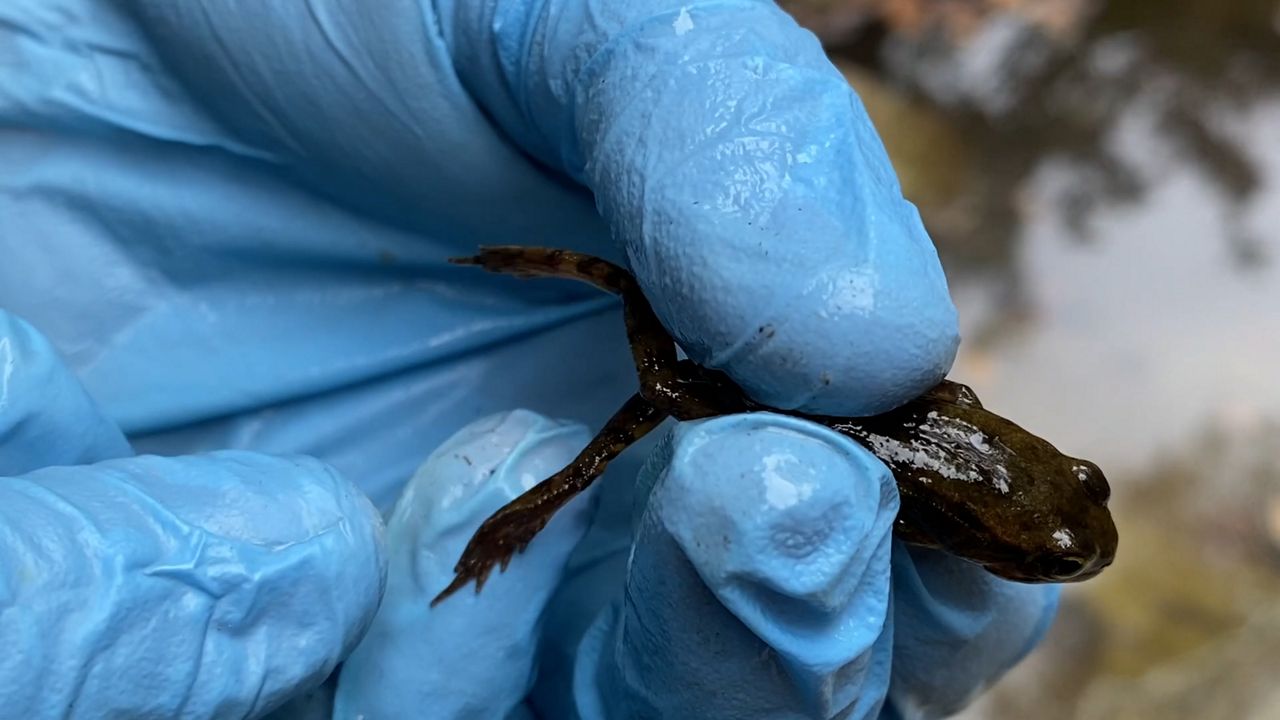 SANTA MONICA, Calif. — “There he is,” said Katy Delaney as she held a wet, brown froglet in her gloved fingers. “Wow, it’s pretty small.”

Tiny as it was, the frog represents something much bigger: the future of a native population, and a conservation success story. For Delaney, it also represents years of work and countless hours spent knee-deep in local creeks.

Delaney is a wildlife ecologist with the National Park Service, and her job is helping to repopulate the California red-legged frog, which used to be common but disappeared from the area some 50 years ago. It was thought to have been extirpated — or locally extinct — until a small population was discovered in the Simi Hills.

Since 2014, Delaney has been relocating egg masses to four different sites, watching over the tadpoles as they grew into young frogs.

“We call them metamorphs, or froglets,” she said. “Froglets is a cuter name.”

Things had been going very well for the project until 2018.

“The Woolsey fire burned every single one of my sites — the source population and all of the four reintroduction streams," Delaney said.

Delaney thought all of her work may have been in vain, but one site — the location of which she prefers to remain a secret — luckily burned less. The frogs survived and, better yet, continued breeding.

However, the frogs still are not in abundance. Finding even one took Delaney and two wildlife interns, Randolph Viola and Lindsay Nason, the better part of an hour and a lot of effort. They waded from one pool to the next, working their way down a rugged slope and finding other amphibious friends along the way, such as a California newt and many tree frogs.

Delaney finally spotted the tiny red-legged froglet hiding among some floating leaves. In that same pool, she scooped up and examined a tadpole as well. These are the stages when they are most vulnerable, but once they hit adulthood, she knows they're safe.

“We would estimate between 10 and 20 adults here, which doesn't sound like a lot, but there weren't any here before," said Delaney.

And certainly not when Viola was a child. The wildlife intern grew up in Ventura and has a keen sense of appreciation for all local creatures — small and even smaller — including a spider which he gently lifted off his shoulder and deposited safely on a nearby tree.

“They don't really have a voice or an opinion of their own to really defend themselves with,” he said. “And I think at least it's our duty to see that they are able to survive and live well enough with us around as well.”

So how does Viola feel when they finally find the species they're looking for?

“Honestly, it’s a relief,” he said, standing over the small specimen cradled in Delaney’s hand. “Like, I’m glad this is all working.”

“That’s how I felt about five years ago,” Delaney laughed, equally relieved.

"Because nature is cruel, and these guys are still surviving," said Viola.

The question is, for how long?

“I worry. I'm a worrier,” Delaney said. “Am I fiddling on the deck of the Titanic? Who knows what’s going to happen with the climate.”

Delaney reminds herself that this species has survived thousands of years and countless fires, but things have changed.

“I don't know how many fires they can go through,” she said. “You know, if we keep having very hot weather or lots of…lots of fire, I'm not sure. I don't know what's going to happen.”

What Delaney does know is that she’s not giving up. While the frogs still exist in other parts of the state, there are currently only a few sites in Ventura and Los Angeles counties with efforts to reintroduce them in Orange and Riverside as well.

“The goal was to just, like, make more frogs and make more places where frogs were,” she said. “And I mean, the ultimate goal would be to get them off the endangered species list.”

Until then, Delaney remain knee-deep in her work, giving this native species a leg up on the road to repopulation.