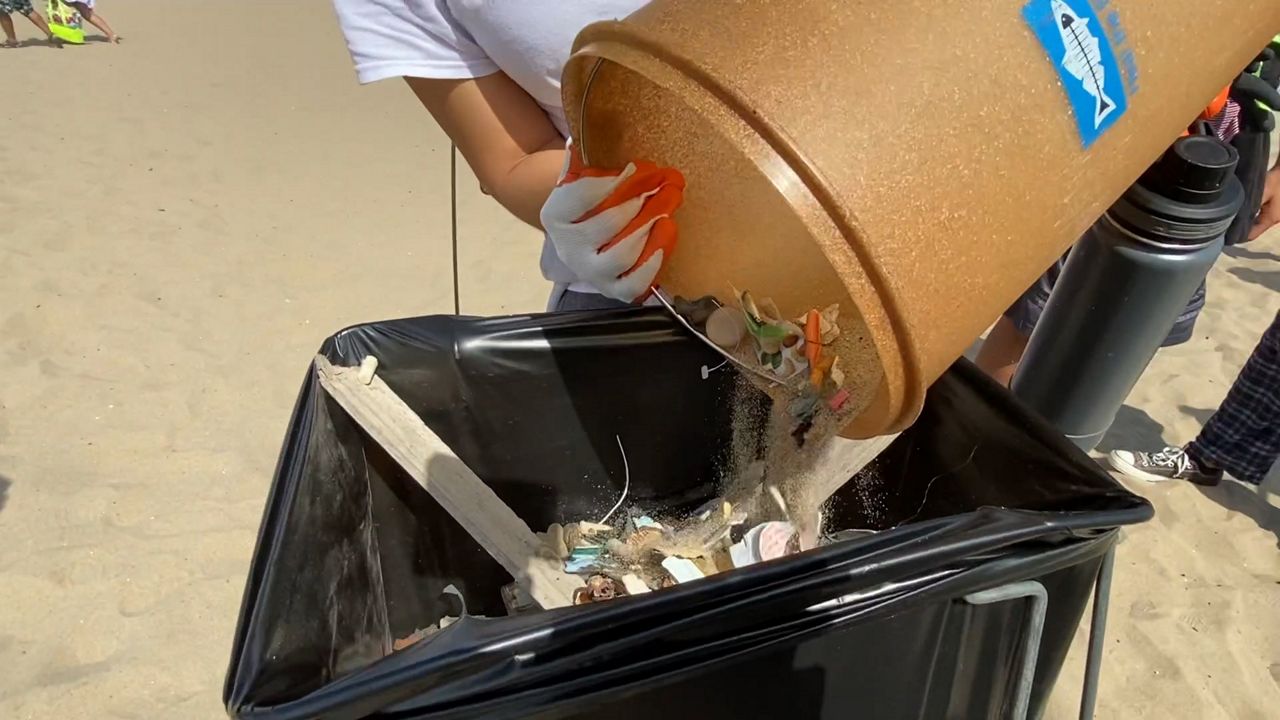 Heal the Bay volunteers pick up more than 5,000 pounds of trash on annual Coastal Cleanup Day

College student Daniela Quiroz is one of the volunteers who showed up to clean up trash at Santa Monica Beach.

"So what we're going to do is we are going to go around and pick up as much trash as we can and put it in the bucket as we go," Quiroz said.

Quiroz combed the beach for everything from cigarette butts to microplastics. She's a junior at California State University, Northridge, and no stranger to this type of volunteer work. She's picked up trash during street cleanups and said littering is one of her big pet peeves.

"It can be as little as, 'Oh, I'll just throw this gum wrapper. It's nothing,' but then it all adds up," Quiroz said.

For the last two decades, Heal the Bay volunteers have removed more than four million pieces of trash from Los Angeles County beaches. This year, organizers say volunteers picked up more than 5,000 pounds of trash on land. However, there are still eight million tons of plastic dumped into the oceans every year. Heal the Bay CEO Shelley Luce said discarded plastic has a direct impact on wildlife and climate change.

"Plastic is made from oil and when we drill from oil, we use fossil fuels and then we fuel this economy that also produces plastics," Luce said. "We also produce greenhouse gases when we make plastic and then we have this product that gets used once or not at all and then ends up in the environment."

The Coastal Cleanup Day happens once a year, but Janis Searles Jones, CEO of Ocean Conservancy, a partner organization for the annual event, said there are things consumers can do to help keep beaches and oceans clean year-round.

"No. 1 thing, think about what you buy, think about your own footprint," she said. "But No. 2, pressure your politicians and pressure the corporations that you work with to be more responsible when it comes to only making things with recyclable materials."

State Sen. Ben Allen, who was at the event to help clean up, is working to make a change.

"I'm part of a broader legislative effort right now to try to reduce our reliance on single-use plastics, trying to move us toward more sustainable packaging," Allen said." So much of the plastic that is out there right now is not actually recycled in the real world even though people are dutifully putting it in their blue bins so that is another effort that we are working on right now, to change the use of the recycling symbol for those products that are not truly recyclable."

For Quiroz, after hauling in three pounds of trash in a few hours, she plans to continue her cleanup efforts because she said she wants to be able to enjoy the ocean's beauty for many years to come.

"This is the land that we are going to be growing up in the next few decades so it's like why not?" Quiroz said. "Do it as much as we can to be able to preserve it."