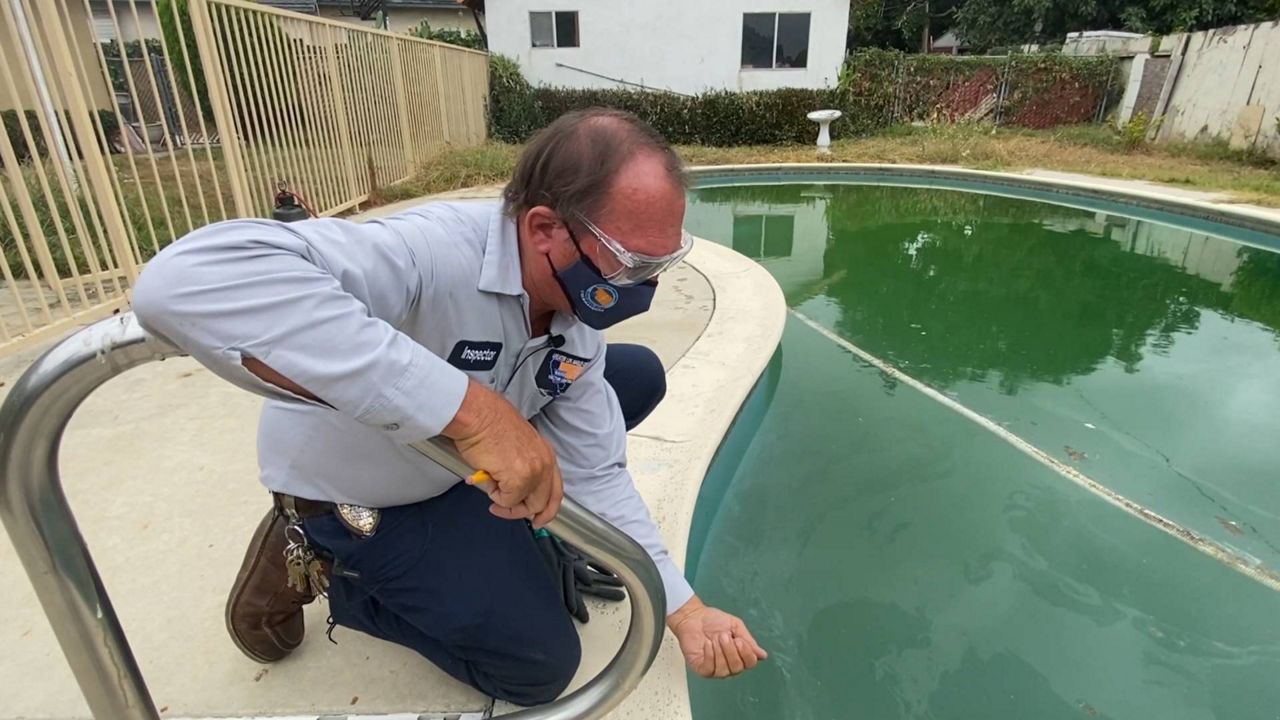 Alan O’Connell with the Greater LA County Vector Control District has spent 27 years ensuring standing pools of water are either treated or emptied to cut down on breeding grounds for mosquitos. (Spectrum News 1/Renee Eng)

In fact, he has designed it so that water flows with a purpose, taking advantage of gravity to move things along.


"The slope is built right into it, and it goes out the sides and into the front," Bollman said. "By doing that, it eliminates any puddles or pooling back here."

Growing up in Seattle and its notorious rainy weather, Bollman learned just how precious water is after moving to California. But he’s also worried about another threat: West Nile virus, which is typically spread to people by mosquitos that breed in shallow pools of water. Bollman is a senior citizen, and experts say senior citizens are high risk for catching the virus. Bollman therefore takes great lengths to make sure water doesn’t pool or run off, only using what he needs.

"Our water is just one to two minutes, two times a week on this area. It’s easy for this to fill up," said Bollman while pointing to a concrete planter in his front yard. "If it doesn’t drain, then you have a breeding site of standing water."

Bollman is practicing water-use restrictions similar to what residents may see as California’s drought worsens. There may also be a side benefit of reducing the risk of West Nile virus by as much as 40%, according to a study from UCLA and several other universities. Researchers found restrictions during the statewide drought from 2012 to 2016 led to fewer standing pools of water, ideal breeding grounds for mosquitos that transmit the West Nile virus.

Alan O’Connell, a vector control specialist with the Greater LA County Vector Control District, has spent 27 years ensuring standing pools of water are either treated or emptied to cut down on breeding grounds for mosquitos. The district reports at least one person has been infected with West Nile virus this year and at least 19 mosquitos have tested positive. According to O’Connell, it’s best to empty standing water from any containers to stop the mosquito life cycle, which can last from five to seven days.


O'Connell added that water restrictions could lead to fewer breeding grounds in residential areas. However, he also points out the drought may be actually be worse for the virus in large bodies of water or places like outfalls, which is where street runoff ends up in a riverbed. He says water helps move things along.

"When we get a good rain storm, this gets flushed out for a while before the weeds and the algae start to build again which does produce mosquitos," he said.

For residents like Bollman, he’s doing all he can to save water and protect himself from West Nile virus, which can be potentially deadly. He's careful to clean up every last bit of standing water, including the bottom part of the covers for his outdoor furniture.

"Like where the elastic folds up, there was water there, it’s all evaporated today," he said. "But if we didn’t take care of that, it stood there for a week, it could become an easy breeding source."