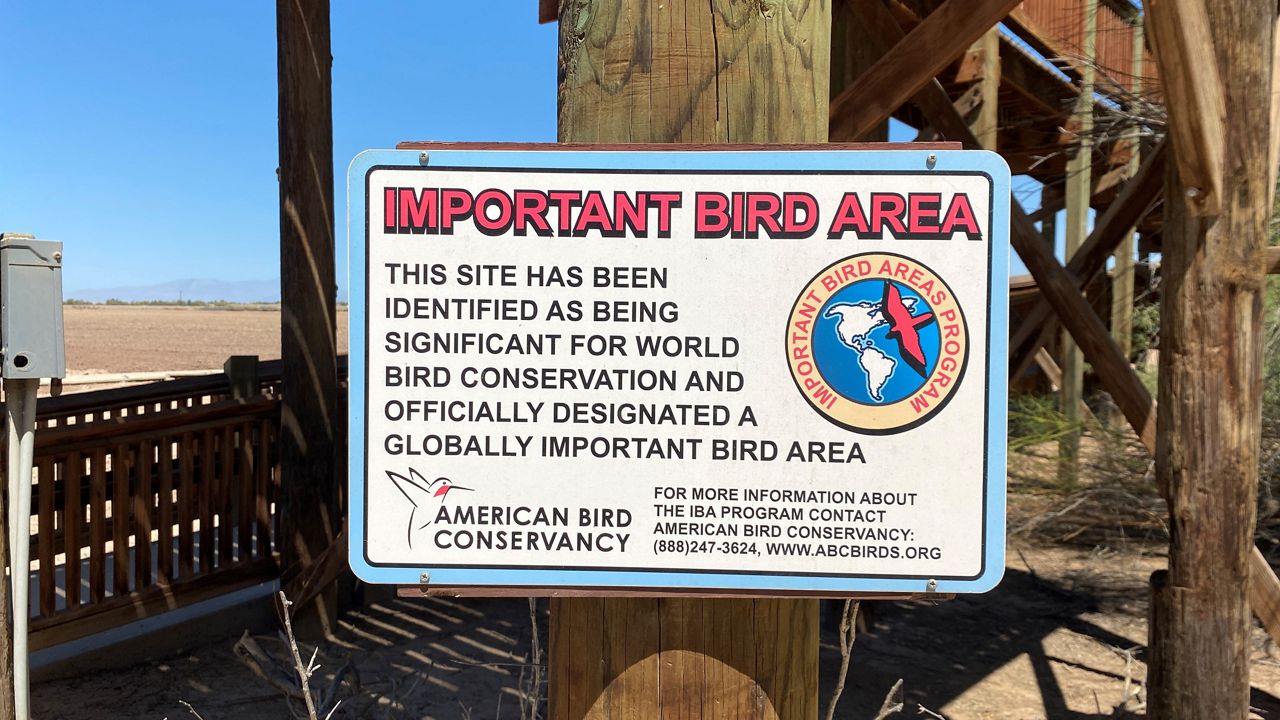 Company ready to fix the Salton Sea, but it's waiting on the state

The Salton Sea's marina, Johnson's Landing in Salton City, once had enough water to exist as a recreational area where boats roamed.

It's the area where Sea to Sea Bi-National Canal Company partner Rod Smith walked recently. It was dry, cracked earth that water once covered.

"If this is decades ago, we'd be water skiing," Smith said.

The state's largest lake has been declining for decades, and that decline is accelerating.

"We're now well past the second decade of a broad, widespread understanding of the problem of the Salton Sea," Smith said.

Smith said that evaporation and water diversion have all contributed to the sea's demise.

His company, the Sea to Sea Bi-National Canal Company, has come up with a solution. It is to import water from the Sea of Cortez through a dirt canal.

"Reverse the decline in the Salton Sea, bring up the elevation and stabilize it, to address the public health problems," Smith said.

As the sea recedes, the surrounding areas, including Mexico, have turned into a toxic dustbowl.

In 2017, Sea To Sea Bi-National Canal Company submitted its solution to the state's Natural Resources Agency.

The forward movement has been stagnant, a point of contention for Smith's managing partner Gary Jennings.

"What business are you in? Are you in the fixing the lake problem, getting rid of the dust problem, not letting little kids get their lungs ruined, saving property values, protecting the environment? Are you in any of those businesses? Because if you were, you would sure as hell do your job and get the f'ing lake fixed!" Jennings said.

Their proposal is a 120-mile canal path estimated to cost nearly $800 million in construction and payments and an additional $40 million in operating costs per year.

Jennings said the best way to pay for this project is through federal and state tax credits. Then the state wouldn't have to reach into its own pocket.

"Their job is to buy water, not to go to Mexico, not to negotiate these contracts because we've done all of that. They just need to commit to buy the water and fix the Salton Sea and get rid of the 100 thousand acres of dust," Jennings said.

While Jennings and Smith are anxious for the Natural Resources Agency to decide, the agency's next step is to have an independent panel study on all the submitted proposals for their viability.

The panel's review will take a year or so to complete.

It's a timeline their company doesn't trust, and while they wait, the Salton Sea gets worse.

And taking no action will have dire consequences.

And Smith said the challenge is before us, as the state just needs to pick a path.

"Do we want to solve a problem today, or are we going to fool around for a decade and have a problem that's twice or three times as large?" Smith said.

Statement from the Natural Resources Agency:

The California Natural Resources Agency has received several ideas and concepts over the years for bringing water to the Salton Sea. We are committed to doing the appropriate due diligence to evaluate these concepts, including 11 proposals received by the state in 2018 in response to a request for information. We have a launched a process to secure a fair and independent feasibility analysis of these proposals and others by an expert panel to inform a decision on whether water importation is feasible as a strategy for long-range restoration of the sea.

The Natural Resources Agency has met with several proponents of water importation concepts and has explained next steps. We look forward to engaging with community members and stakeholders over the coming year as we develop a long-range plan for the Salton Sea beyond projects in the 10-Year Plan we are currently implementing. Collectively, these efforts will result in improved environmental conditions for surrounding communities and fish and wildlife dependent on the Sea.

CORRECTION: An earlier version of this story stated that water would be imported from the Sea of Cortez through a series of pipes, rather than through a dirt canal. It also incorrectly stated the name of the Sea to Sea Bi-National Canal Company. (Aug. 20, 2021)