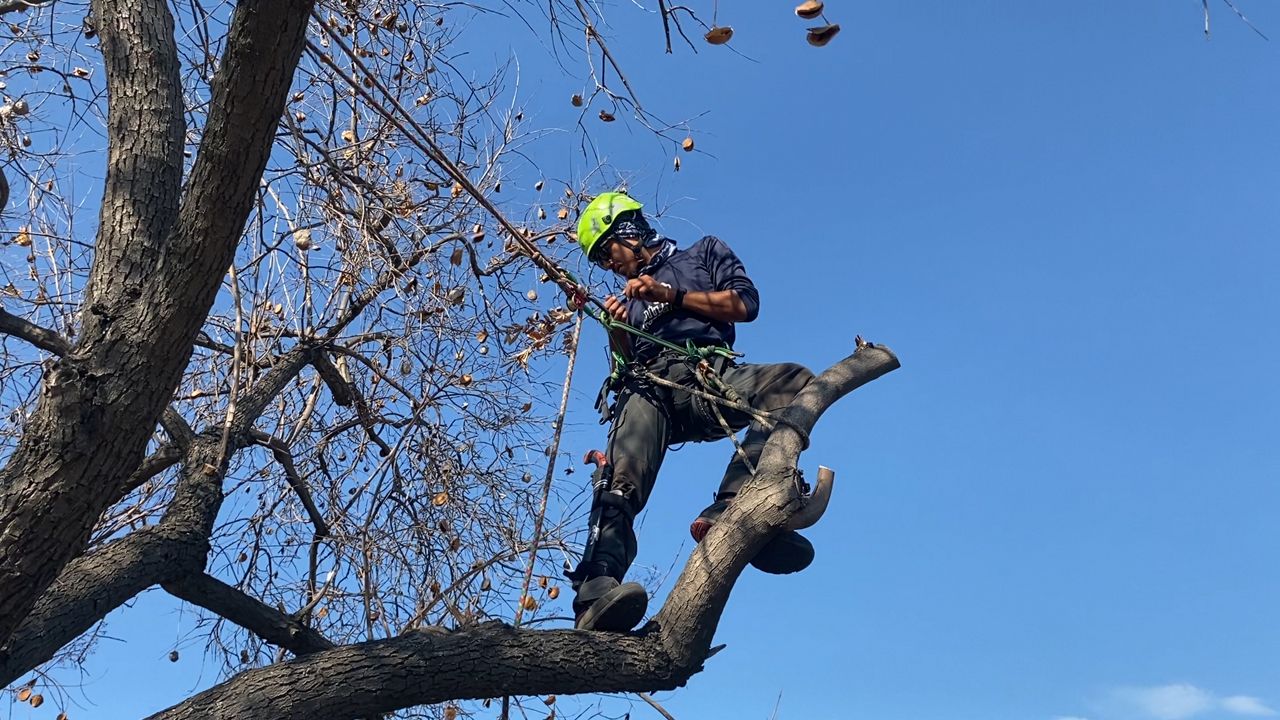 LOS ANGELES — On a recent Monday morning, Nick Araya was standing beneath an exhausted-looking jacaranda tree in the East Los Angeles neighborhood of Montecito Heights. It was just after 8 a.m., and the sun was already blazing.

Araya is a master arborist and the owner of TreeCare LA, a company that services trees around the city. As the drought continues to wreak havoc on California, trees are under stress. Araya and his team were outside a family house to cut down the dead jacaranda and perform some damage control on a coast live oak.

"There's nothing wrong with it, [the jacaranda] it's not like it had a disease. It just straight up died," he said. "It's on a street full of jacarandas, and we can look at all the other ones — they look OK, but I think this is the canary in the coal mine."

Araya surveyed the massive oak tree with big overhanging limbs toward the back of the property and examined some of the dead leaves. He took a small blade out of his pocket and cut away at a piece of branch, revealing a tiny white insect: "That's the twig girdler… it almost looks like a maggot, and it's crawling inside the tree," he said.

Twig girdlers are bugs that can damage and dry out tree branches by crawling inside the wood. Dry temperatures make it easier for them to move around and cause more damage. Los Angeles hasn't experienced a drought this extreme in 127 years, according to drought.gov. Conditions are classified as an 'extreme drought,' with 98.53% of the county being impacted by the heat and lack of water.

Over the past few years, as temperatures have continued to climb, homeowners have increasingly turned to drought-resistant landscaping. While it's a generally positive trend, Araya said, it can have unexpected consequences for trees, especially ones that line LA's streets.

"A lot of folks will pay a lot of money to re-landscape their whole front yard, doing zero scaping, putting in decomposed granite, taking out the lawn and taking out the irrigation to accommodate the low water use plants. But then they're also taking water away from the tree," he explained.

He advised that if one has a big tree in the front of a house, it's important to intentionally water it every few months.

"A big mature tree, that might mean just watering the tree a few times per year … a big heavy watering that replicates a full-on rainfall," he said.

Trees that line LA's streets in residential areas, parks and medians provide shade for the city. Areas with substantial shade trees can be several degrees cooler than ones without, and summer months exacerbate the temperature disparity.

Greg Spotts, assistant director of the city's Bureau of Street Services, said areas without many trees can actually be dangerous.

Spotts said trees will be essential to the health of Los Angeles over the coming years.

"The city is going to get hotter, and neighborhoods that used to have 20 days of extreme heat a year are going to have 40 or 50 days… we have to rethink how we plan and build the physical city."

The Bureau of Street Services and other organizations are working to plant more trees in neighborhoods around Los Angeles, particularly in places that have not historically had a lot of trees. They also work to keep trees watered.

"More and more, we are trying to treat the trees as a valued part of the public works infrastructure," he said.

At the Montecito Heights house, Araya watched as the jacaranda came crashing down. It was chopped, then the brittle wood was pushed into a mulcher. Despite the hurdles and environmental pressures on trees, Araya said he remains hopeful.

"We can come to a place where these trees are living as long as humanly possible … Now that we have created this world that makes trees struggle, it's our job to step it up a little bit and manage them the right way, so they can thrive in the world we created for them."