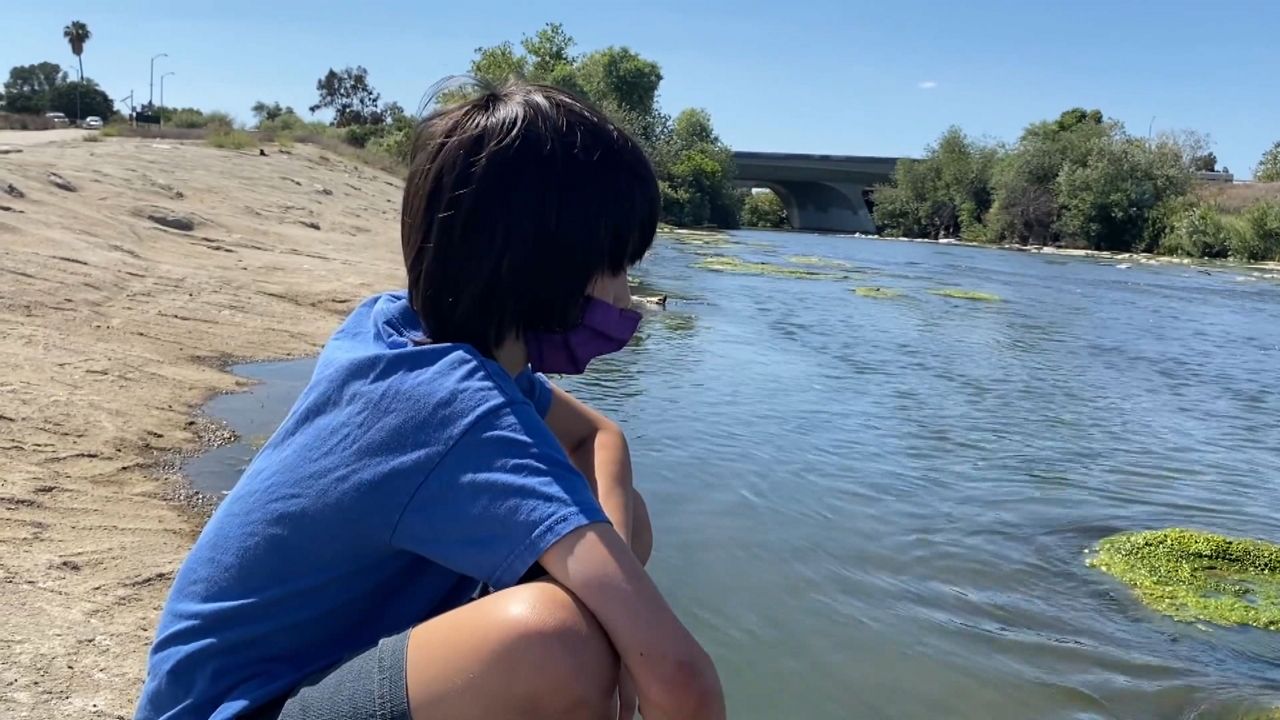 ELYSIAN VALLEY, Calif. — One of LA’s latest engineering developments is helping Angelenos monitor water quality along the LA River. The river beacons are an impressive and helpful new tool for people who frequent the river — letting them know when it’s safe for recreational activities like fishing and kayaking.

Even more impressive is the inventor of these “river beacons’ — he’s a 12-year-old middle school student: Jasper Lutyens, who helped design a sophisticated system in which bacterial analysis is conducted by researchers, and the data is sent to a telemetry box where a light turns green, red or yellow depending on the level of contamination.

Lutyens, who lives with his family near the river in East LA, has always enjoyed inventing and designing projects. The young engineer’s journey began with a third-grade school field trip to the LA River where he was shocked to see a buildup of trash on the riverbank alongside plants and wildlife.

“After seeing all these creatures along the river, it made me feel like, that’s not a place for people or animals to be,” Lutyens said.

The experience inspired him to come up with an invention that would be able to monitor water quality along the river.

After developing his initial ideas with his Lego set, Lutyens designed a beacon — a light that would illuminate like a stop sign, depending on bacterial levels in the water. He drew up designs, displaying how the data would be sent to a computer. Lutyens imagined that the beacon would simultaneously encourage people to keep the water clean, and monitor the water quality.

“It protects people but also helps raise awareness about how dirty our environment is. People might start to realize that we need to stop destroying our earth," he said.

Lutyens' dad, Marcos Lutyens was impressed. He’s an artist and designer in his own right and encouraged his son to send his idea over to LA City officials.

“If you don’t like something about the city, don’t complain about it, just find a solution. Find a way to work with the community or with the structure of the city to change things,” Marcos said, adding that he was happy his son was learning an important lesson at such a young age. “It’s the best way to transform things.”

As it turned out, the city agreed with Marcos and his son that changes needed to be made.

Impressed with Lutyens' design for a water quality beacon, The LA Sanitation Department invited him to present his project in person. Wearing a smart suit for his first ever business meeting, Lutyens brought along a poster board explaining the ethos and mechanics he had envisioned.

“I wanted to do something to help other people, and our city,” Lutyens said.

The Sanitation department representatives agreed that the beacons would be a help to the city and decided to take on his project.

One of the people in that initial meeting was Mas Dojiri, assistant general manager of LA Sanitation & Environment. Dojiri said at first, he was skeptical of the young engineer’s proposal.

“I thought it was worth listening to, and it wouldn’t take up too much of my time,” Dojiri said.

But once Lutyens made his presentation, Dojiri was won over.

“At the time (he gave the presentation) he was in third grade and for him to have that much composure and make such a convincing argument for the water quality beacons, I was very surprised and impressed," Dojiri added.

Dojiri then took the proposal to the mayor’s office — where it was also greeted with enthusiasm.

“The reason why the beacon is so great is because no one has to go to a website to check the bacterial levels or results of the water quality monitoring," Dojiri said. "The other thing is, there is no language barrier. Everyone understands a stop light, red, yellow green, so there is no translation necessary that’s the advantage."

Eventually the project got the go ahead but it took a few years to bring all the pieces together. Last year the first beacons were installed at three input points along the river and they closely resemble Lutyens' original Lego model and drawings. Water samples are conducted along the river throughout the summer, and the data is sent to the beacon, which lights up accordingly.

Marcos said he’s delighted that his son’s idea has become a reality.

“I’m very proud of him, but I think it’s just the beginning of a lot of things he can get up to," Marcos said. "I hope he can inspire other kids, to get involved. If you have a dream, thought or hope, you can pitch it.”

As for Lutyens, the whole experience has led to an understanding that he has the power and potential to make beneficial improvements to the city.

“Whether you’re a 50-year-old or a kid who is 9 years old, you should always do something if you see a problem," Lutyens said. "You shouldn’t just complain — you should take it on.”