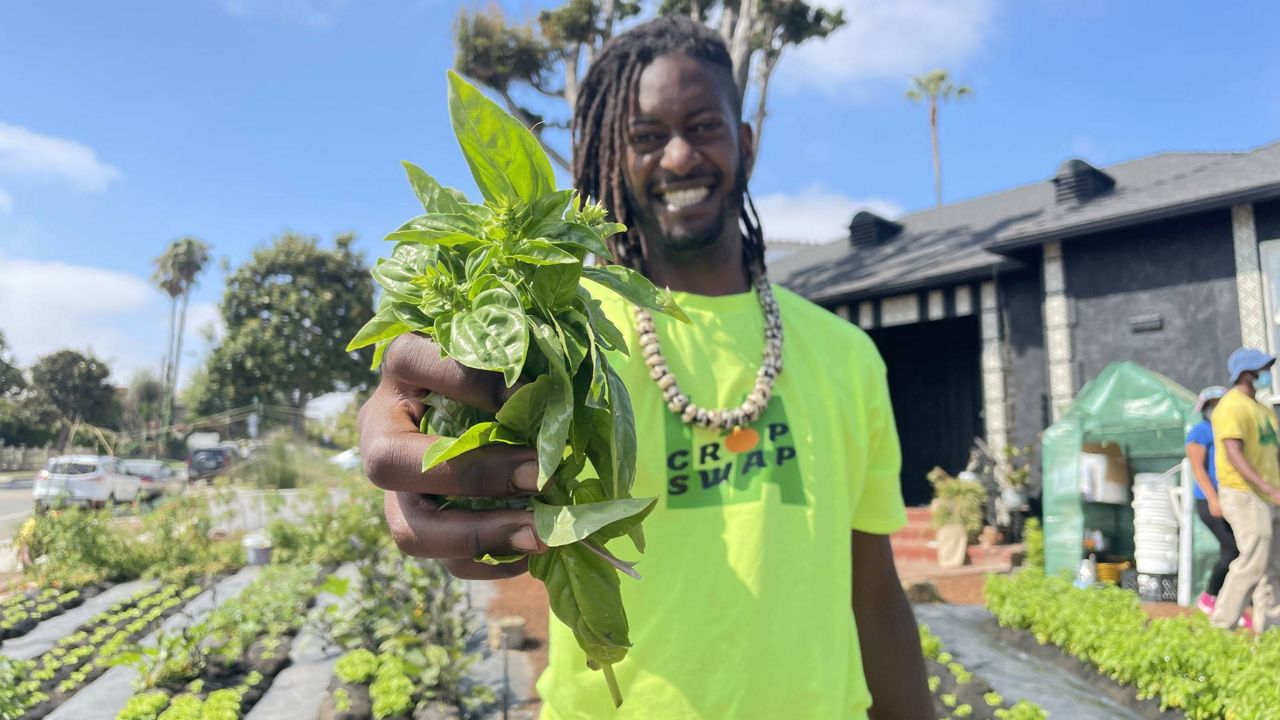 Could the future of sustainable food production be urban microfarms?

LOS ANGELES — Jamiah Hargins harvests tomatoes and gets really excited about plants when he starts talking about them.

In fact, Hargins has a wonder and reverence for the way plants thrive, communicate and just exist.


Once upon a time, however, Hargins was a stock trader in a suit and tie, checking into a corporate office — and said he hated it.

Inspired by plants and gardens, he knew wanted to work with them. He quit his job, moved to Brazil for some soul searching and returned with a new mission: to help his South Los Angeles community have access to fresh, nutritious produce.

Through his existing parent company Crop Swap LA, Hargins in April launched Asante Microfarm, a small organic garden on the front lawn of a residential home in View Park. With the grass ripped out, there are rows of fresh lettuces, all variety of peppers, eggplants, basil, oregano, many types of tomatoes and even a pear tree that bears a variety called a Hood Pear. It’s a little oasis on a busy street in View Park, where cars race by and honk to wave hello to Hargins and his volunteers as they work.

The microfarm is a subscription-based food service, and once a week, the produce is harvested and picked up the same day by local families. In the short three months since Asante Microfarm has been operating, Hargins already has 50 families subscribed to the service and 50 more on the waitlist.

All the subscribers live within a two-mile radius of the farm.

"This began with my daughter," said Hargins. "She’s 3 and a half. I began to think, how can she have healthy food in a city that’s constantly plagued by food apartheid?'"

Hargins' point was driven home when customers Mario and Cecilia Prins arrived to pick up their weekly bag of produce. They use the greens for their juice company Prins Wellness.

“In many communities, we don’t see a whole garden, forest, farm in the front yard,” Mario said. Once they found out about Asante Microfarm, they signed up immediately.

“We don’t have a lot of organic options in this community,” Cecilia said. “We very rarely have a lot of grocery stores that we can go to, and as a matter of fact, the Ralphs down on Slauson and Crenshaw is closed.”


Hargins noted that 50 families signed up — with 50 more waitlisted — means Asante Microfarm is providing one solution to the well-known problem of a food desert that exists within South LA. Residents there often have to drive many miles in our infamous traffic just to get a fresh apple.

“Food can be shipped to your dinner plate from as far as 150 miles away in Los Angeles,” said Hargins. “From the moment you harvest the food, it begins depleting its nutrient value. So what we’re doing here is harvesting right at the peak of its health and handing it directly to the consumer.”

In this era of extreme drought, Hargins explained how he's been careful to make this microfarm as sustainable as possible. It’s biggest feat is recycling 92% of the water used by capturing it in 7-foot wells under the crops and then pumping the same water back up to continually water the plants.

But the front yard, and indeed the house attached to it, does not belong to Hargins. It belongs to homeowner Mychal Creer, who has been living there for over 20 years with a regular grass lawn. Creer was convinced to set up a land lease with Asante Microfarm because he believes in the mission.

“It did feel radical, but radical in the positive sense,” said Creer. “I’m doing something different from what a landscaping project may look like.”

Hargins said the microfarms won't stop there. His mission is to get a microfarm on front yards across all of LA.