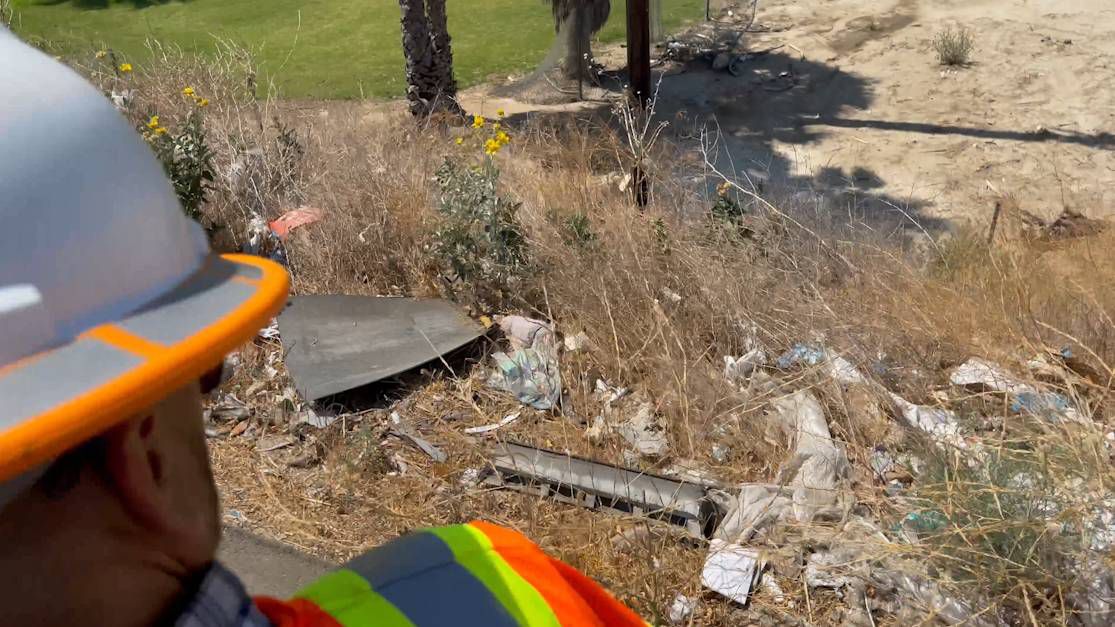 JARUPA VALLEY, Calif. — At a park in Jarupa Valley right off State Route 60, there is trash everywhere.

Caltrans workers like Sean Pagenkobp call it the “trashing” area, but they're the ones who pick up what everyone else leaves behind.


"We normally will 'trash' an area, and then the very next day, there’s already trash accumulated," Pagenkobp said. "Just a problem with people not tarping their loads, throwing trash out, it’s a big issue."

Pagenkobp’s District 8 — which includes San Bernardino and Riverside counties — is the largest of the 12 Caltrans districts in California. Because manmade debris has become such a problem across the state, Gov. Gavin Newsom last week announced a more than $1 billion initiative called “Clean California” to clean up litter and beautify the state.

“Unprecedented effort to acknowledge what all of us recognize as we drive around this state. It’s too damn dirty,” Newsom said.

Along a stretch of SR-60 between Interstsate-15 and SR-91, it's clear the problem is only piling up.

According to Caltrans maintenance stormwater coordinator Joe Solis, trash along the Santa Ana River bed affects wildlife such as birds and fish.

"[The animals] will eat it. They will contaminate themselves," Solis said. "Trash that’s been in a drain or on the road side may have petroleum or other contaminants on it as well."

Newsom’s plan calls for over $400 million in litter abatement alone over the next three years and will create an estimated 10,000 to 11,000 jobs, including state jobs and opportunities for at-risk youth, those experiencing homelessness and people reentering society after incarceration.

It is welcome news for Caltrans. Solis and maintenance crews have kept up with picking up trash since the pandemic began and the work-release program through the courts — where probationers and people working off infractions or misdemeanors kept up with the litter abatement — ended.

Solis noted that picking up trash often gets in the way of Caltrans maintenance crews being able to do their jobs, like improving infrastructure and keeping roads safe.

“Plastics, paper, metal, small man-made debris that is in there, in addition to the sediments that we’re trying to clean. We end up disposing of a lot of litter,” he said.

“It’s a rewarding experience to come out here and clean California,” he said.