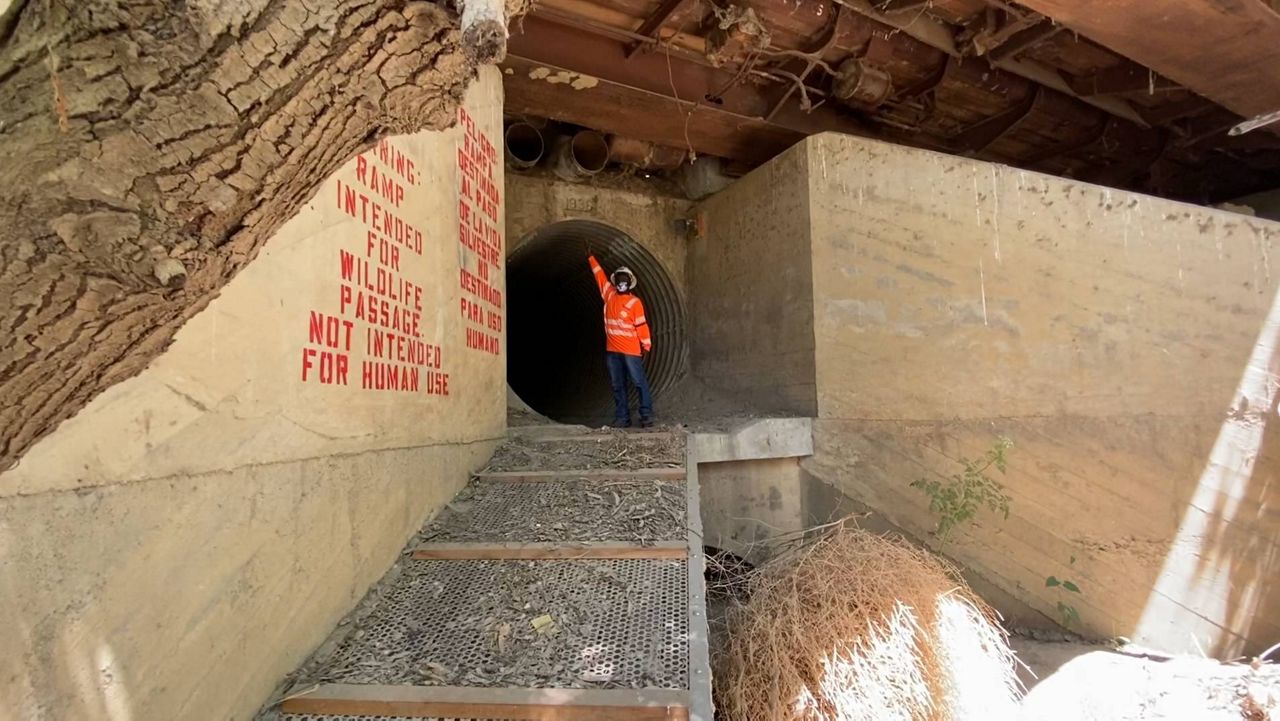 Joint project between Caltrans and the National Park Service to retrofit five drainage culverts along SR-118.

Skunks, possums, a bear! Oh my! Animals make use of crossings under SR-118

Because teams from Caltrans and the National Park Service gave them a pathway.


A stretch of the state highway in Ventura County merges to just two lanes, but extremely busy ones. Large trucks pass in both directions, even before sunrise.

“Big trucks going to the farm area to bring food,” Frances Appiah explained, “so this area is very busy.”

It makes it dangerous for any animal, big or small, who dares to attempt to cross it. Appiah remembers one day in particular when he saw an opossum that was run over by a car. Then another car, and another and more after that.

“I did something that I’d never done before,” he said, staring at the road through the fence, as if witnessing the vivid memory again. "I stopped the cars and removed it from the way.”

He actually went on to bury it on the side of the road, but that day he realized the important work he was doing.

Appiah is a mitigation specialist for the California Department of Transportation. For the past 10 years, Caltrans has been collaborating with the National Park Service to help animals cross the road.

The result has been five drainage culverts that have been retrofitted to make them accessible and inviting.

Take the one at Long Canyon that featured a straight drop off a 10-foot concrete wall.

“Animals jump in, they will die,” Appiah said. “Or they cannot go back.”

No need to jump now that they can strut down a long concrete runway, cross beneath the road using the pre-existing culvert, and disappear into the wild habitat on the Southside of the highway.

According to National Park Service biologist Justin Brown, it took no time at all for animals to find the ramp and figure out how to use it.

“We’ve had coyotes, raccoons, opossums, skunks,” he said, listing the visitors who have navigated the ramp.

Each of the five culverts along a 12-mile stretch was treated differently, depending on their existing structure and surrounding landscape and like the road above, each one sees its share of traffic.

Like Long Canyon, the crossing at Wailing Siren Ranch Drive featured another huge drop before steel grates were added to bridge the gap. Now, it is like a party in there with the group pausing to marvel at the sheer number of opossum tracks.

“Every single crossing point got significantly more use than what we saw pre-construction,” Ranger Brown said, “so all of them seem to be working.”

He knows this because for the past year, he had cameras monitoring each crossing, capturing 10,000 images per month. They expected to see things like coyotes and raccoons, but among the thousands of images was one big surprise.

“A bear!” Appiah shouted in surprise. “We are not in Chicago!”

Apparently, the bear crossed SR-118 heading south and eight hours later crossed back to the north side again using the culvert both times.

Of course animals cannot read, so they have to find these crossings on their own, but Caltrans associate biologist Celina Oliveri did put up some messages for humans.

“We did put a sign above this culvert that says ‘for wildlife use only’,” she explained, “Hopefully people will stay out of the area and kind of just let the wildlife do their thing.”

The five retrofitted culverts were designed to accomplish two things. They increase connectivity in what has become an increasingly fractured habitat for our local wildlife and they decrease the chance of an animal being struck by a motorist, which, depending on the size of animal, can cause quite a bit of damage to the vehicle and even injury to the driver.

Since the project’s completion last year, Brown said there has been less roadkill in the area, at least among larger animals.

What happened to that opossum still bothers him but knowing animals are already benefiting from his work is a joy almost too much to bear.

“It was a celebration in my heart,” he said of the moment he saw photos of the culverts in use, “seeing this area being used was very great.”