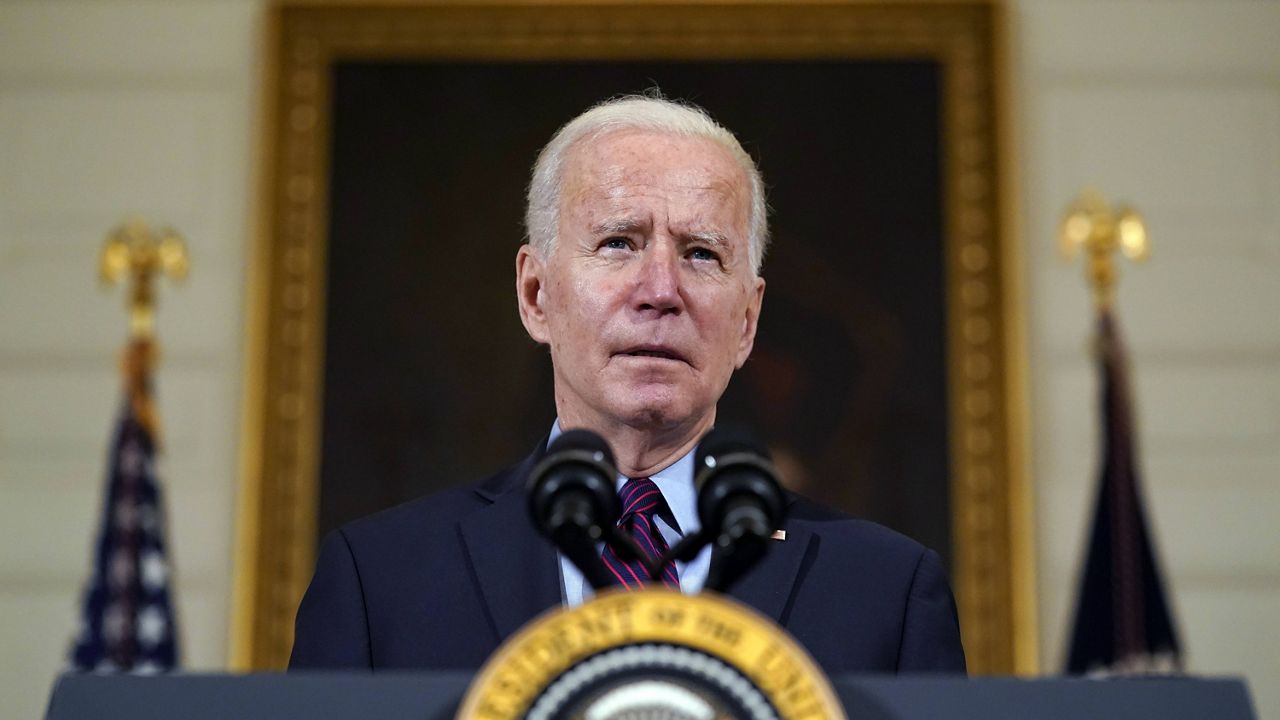 President Joe Biden speaks about the economy in the State Dinning Room of the White House, Friday, Feb. 5, 2021, in Washington. (AP Photo/Alex Brandon)

Although President Biden is getting pushback from different sides, he is pushing forward with his agenda that reflects much of California’s ongoing efforts.

In California, the climate is changing. It has warmed about three degrees Fahrenheit in the last century, according to the Environmental Protection Agency. The state has seen raging wildfires, more heatwaves, less rain, and threats against coastal development.

Rita Cliffton, a policy analyst for climate and energy at the Center for American Progress, said other states have been slammed with tidal waves.

Cliffton said thus-far California has faced the existential threat head-on, which has paved the way for others and now for the Biden administration.

“I think the companionship is positive and I think we’ve seen in the last four years, California has played a defensive role, so it’s exciting and relieving to see California take a more offensive role and closely-knit companionship role with the Biden administration,” Cliffton said.

Some examples include California’s goal for a 100% clean power sector by 2045 and now president Biden’s more aggressive goal is to reach that by 2035. California wants 100% new sales being zero-emission electric vehicles by 2035.

In comparison, President Biden signed an executive order requiring the electrification of all federal and public vehicles. California wants to electrify bus fleets by 2028 while Biden’s campaign has a goal for all American-built buses to be zero-emissions by 2030.

“California has provided sort of a gold standard from the golden state,” Cliffton said.

“Willfully throwing our own people out of work, reducing our domestic energy security, raising costs and prices for working families; All for no meaningful impact on global temperatures. Just to buy applause at those international conferences where the participants all assemble by private jet,” McConnell said on the Senate floor.

Cliffton believes President Biden has made it clear his climate agenda goes hand in hand with his economic plan to add high paying, unionized jobs within the United States.

“Long term, the cost of inaction far outweighs the transitional period from our fossil fuel-dependent economy to the clean one we need to survive into the future,” Cliffton said.

Cliffton said both California and the administration have goals to find the communities most at risk to climate change (health and economy) and ensure benefits go to those people.

Becerra challenged the Trump administration on more than 100 regulatory rollbacks, with most of the lawsuits regarding environmental protection. Becerra also established a first-of-its-kind Bureau of Environmental Justice within the California Department of Justice.