MALIBU, Calif. — The tide was nearly 7 feet on a recent winter morning at Broad Beach, drowning a public easement.

But like the easement, homes are also threatened by the encroaching ocean.

For Surfrider Foundation's Graham Hamilton, he knows the sea eventually will be knocking on people's doors.

"It's something that we don't really see happening until we have an El Niño year, a heavy winter swell, a King Tide event, that for all intents and purposes, erases the beach," Hamilton said.

But things changed once homes were built on sand.

"What happens is you introduce hard structure between the waves and the land, you're interrupting the natural flow of sediments," Hamilton said.

As water temperatures warm and ice sheets melt, the SoCal beach lifestyle is at risk.

Beaches are disappearing, and while homeowners put in a seawall for protection, it's speeding up the process.

"As these waves come in, they refract off these revetments, these seawalls, with twice as much force and end up scouring the beach further," Hamilton said.

Broad Beach is an example of how climate change is impacting sea level rise.

Water could rise 6 feet or more by the end of the century, drown billions of dollars of property by 2050, and two-thirds of SoCal beaches could be gone by 2100.

"So the only real solution in our mind is to move infrastructure out of harm's way," Hamilton said.

There have been 6 inches of sea-level rise in SoCal since 1950, but levels are expected to rise over a foot by 2035.

"The growth is not linear, the growth is exponential, and we're starting to see that increase all along the coast," Porter said.

Their flood data spans 30 years to coincide with the life of a mortgage.

"We find that there's a negative appreciation for those properties relative to properties that don't experience flooding in the same areas," Porter said.

Here's a look at Huntington Beach in 2020 that identifies the likelihood of flooding areas. 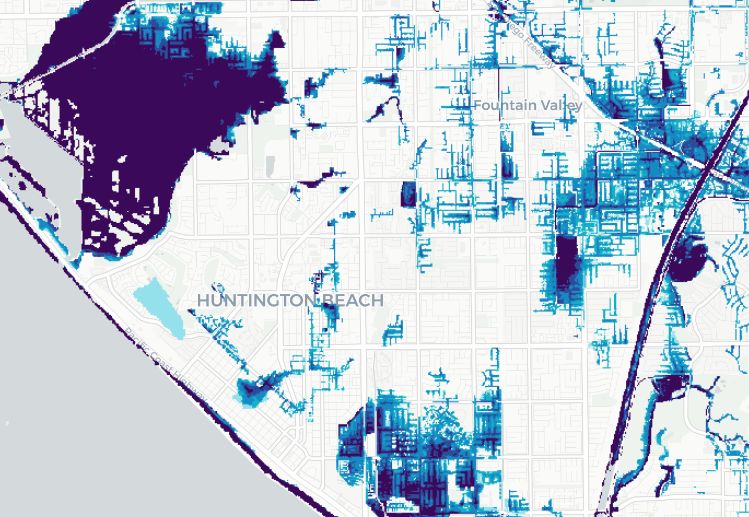 But this map-calculates what flooding could look like should there be a 1-in-500-year-event categorized as extreme precipitation or coastal surge events.

"It does show you the growth and impact the changing environment is having on the local area," Porter said.

While sea-rise is hard to tell when you're not flooded, California's wildfires are brazen.

"We were one of the first homes that was burned, and we lost everything. It came through our canyon, and it's pretty devastating," Nichols said.

The year 2020 rivals the hottest year on record, and five of the six largest wildfires in state history occurred last year.

"These events seem to be happening more often as the climate changes," Nichols said.

Despite the pain, he visits his land to continue cleaning up while unsure of their next steps.

"Nothing's left but a pile of metal and rock," Nichols said.

We need forward-thinking solutions to save our future from the changing climate, he said.

Fire and water are changing the way we live in California.

Beaches could become precious in the future if we lose them from rising seas and erosion.

"There's no silver bullet, but everybody has their part to play even if it's just educating themselves and becoming aware of the issues that are taking place in their own backyard," Hamilton said.

So while a new administration will prioritize climate change, solutions will require every one of us.