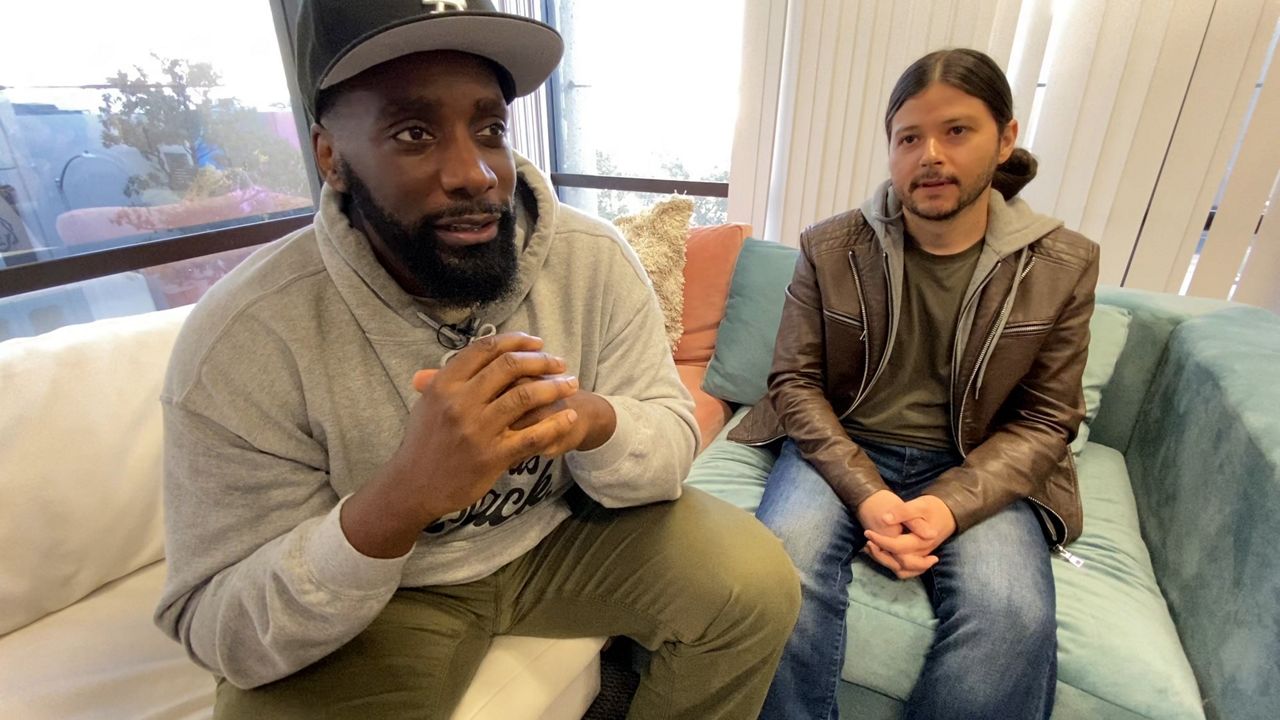 With 'Spaceship' nominated for College Television Award, filmmakers ready for careers to launch

The two met as students at the American Film Institute, where they each earned a Master of Fine Arts, Gabriel as a screenwriter and Camarena as a director. That screenplay that first impressed Gabriel? They went on to develop it and ultimately created "Spaceship," which has been nominated for Best Scripted Series in the upcoming Television Academy Foundation College Television Awards.

After a lot of work, preparation and fundraising, Camarena said the nomination is very gratifying.

“It was just like a way to validate all of our effort,” he said. “And it also — we always wanted the film to be seen.”

The short film tells the story of Maria, a Latinx trans woman who is fighting to keep her young daughter. Having not lived the trans experience themselves, Camarena and Gabriel devoted themselves to research, reaching out to multiple trans Latina organizations.

“I think there’s a responsibility, not just us as filmmakers, but to the community that we’re portraying, that we honor them,” Camarena said. “And that it also it’s an authentic story, and also a story that doesn’t harm the community, that’s an already very harmed community.”

“It probably would be doing a disservice if we didn’t do research,” Gabriel agreed. “I think there’s a way that you honor people whose stories are not specifically yours. Having people who have lived experience is imperative. And without it, it’s just not good storytelling, in my opinion.”

Among the groups they worked with was the Trans Wellness Center, which serves roughly 1,000 clients a year, half of whom are Latinx and immigrants trying to escape violence and persecution. It was there that they met program manager Mariana Marroquin.

She was also glad to see a portrayal of a trans woman who is a devoted, hardworking mother.

“I think it’s important to talk about not only the challenges that we face but also the contribution that we make to society,” Marroquin said. “I think we have a lot of society members that are parents and they’re fighting every day to provide for their families and for the people that they love. We need to balance what we say about the trans community.”

What Gabriel and Camarena can relate to in Maria’s story are the struggles of poverty. Both come from poor backgrounds and bonded over stories of their own mothers. And both continue to work with their communities.

Camarena comes from Guadalajara. He works as a mentor at the Latino Film Institute’s Youth Cinema Project and ultimately wants to make films in Mexico.

Gabriel is a marriage and family therapist working in Compton, Watts and South Central. He specializes in Black trauma but has also worked with several trans kids and remembers one in particular.

“Did not have a lot of family, foster care, was getting bullied a lot,” he said, “and it was just a lot of love I had for them. I took that into the project.”

In addition to the nomination, the duo has big things on the horizon. Gabriel has a short film, “Hallelujah,” that was accepted into Sundance and Camarena recently won the grand prize for Latino student filmmaker from the Directors Guild of America.

Again, he said, it’s further validation that they are on the right track. “Brings a little of hope that there’s space for stories like the stories that we want to tell,” Camarena said.

But for Gabriel, it also validates what he’s known since that first reading.

“It means he’s dope, man!” he said with a booming laugh. “Jorge is next out!”

“Art school was like, Hogwarts, you know what I’m saying?” he continued. “You know who the top dogs are, you feel me? Jorge always been the big dog.”

Big is the goal, for both of them. Oscar acceptance speech big. But whatever success they achieve, the two hope they never lose sight of what drives them, a passion for telling stories that move them deeply, stories about what they came from, stories that need to be told.