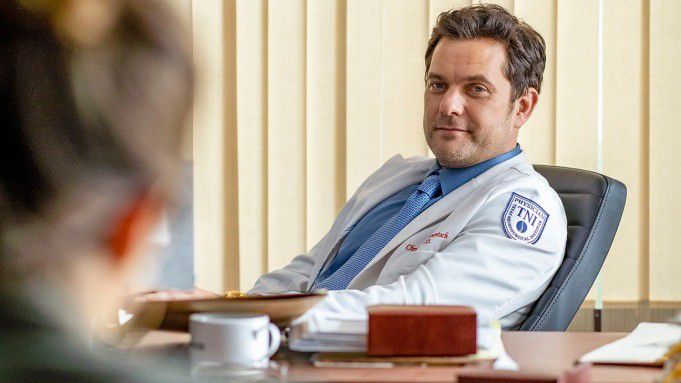 LOS ANGELES — When Joshua Jackson raises his steely blue eyes to peer out over a surgical mask, the effect can be quite the death stare.

The intensity the stage and screen actor brings to the role of Dr. Christopher Duntsch in “Dr. Death” has not gone unnoticed—certainly not by critics who have nominated him for best actor in a limited series or movie made for television.

With a toddler at home, he admits, he forgot nominations were coming until his publicist called him with the news. “I was like, ‘Oh, wow. I’m really glad I took this call,’” he remembered with a laugh.

In addition to his own accolades, the show was nominated for best limited series and his co-star Christian Slater also got a nod for best supporting actor.

“I’m excited for myself. I’m excited for Christian. I’m excited for the show,” he said during a Zoom conversation at the end of December, when nominations were first announced. “It was an unusually cohesive work team. Everybody enjoyed the experience of doing it, not just how it turned out.”

”Dr. Death,” which is based on a podcast inspired by a true story, was released during the pandemic and it’s been a strange experience. Normally when a project comes out, if it’s connecting with an audience, he said you feel it on the street. But not this time.

“It’s just hard to gauge,” Jackson explained. “Particularly in this bizarro year where you’re not interacting in the normal way, it’s just nice to come to the end of it and be reminded that, ‘Oh yeah, we did that and it was really good.’”

Doing good work is something he takes pride in, but he’s also interested in just doing good. His company Liquid Media Group is on a mission to help independent filmmakers get their original content seen by an audience.

“We call it a production company but what it is, is building a studio system for the streaming era,” Jackson said.

One group he’s working with is iNDIEFLIX, which makes and distributes social impact films dealing with issues such as anxiety, bullying, social media and race. These films, which feature first-person accounts from students to Olympic swimmer Michael Phelps, are shown in thousands of schools across California, including Luther Burbank Middle School where principal Dr. Oscar Macias made them available to students and families.


“We need kids to talk,” Macias said. “It could be the first sign of early detection and it can prevent really tragic instances that we want to avoid.”

He said the data is clear. According to the Association for Children’s Mental Health, 1 in 5 children and youth have a diagnosable mental health disorder. One in 10 have a mental health challenge that affects how they function at school. In addition to watching the films, hopefully as a family, he said students and parents also get resources to help facilitate discussions he wishes he had as a young person.

“I was that child, that didn’t speak up,” Macias explained. “Walk it off was the traditional thing we were told as boys. I internalized too much and suffered because of that and learned a lot later in life that it’s important to communicate and talk.”

It’s something he and Joshua Jackson have in common. The films he recalls seeing at school were outdated and mocked by students, something iNDIEFLIX is changing.

“We’ve come a long way,” he said. “I just look at those films and I think to myself, ‘Man, I wish I had those resources available to me when was I was a kid.’”

Excited as he is about his nomination, the upcoming award show and the success of “Dr. Death,” it’s being a dad and fostering important filmmaking that are the focus of his life right now.

“Giving back is really giving to yourself, right?” he said. “It makes you have a better day to feel like you’ve done some positive thing.”