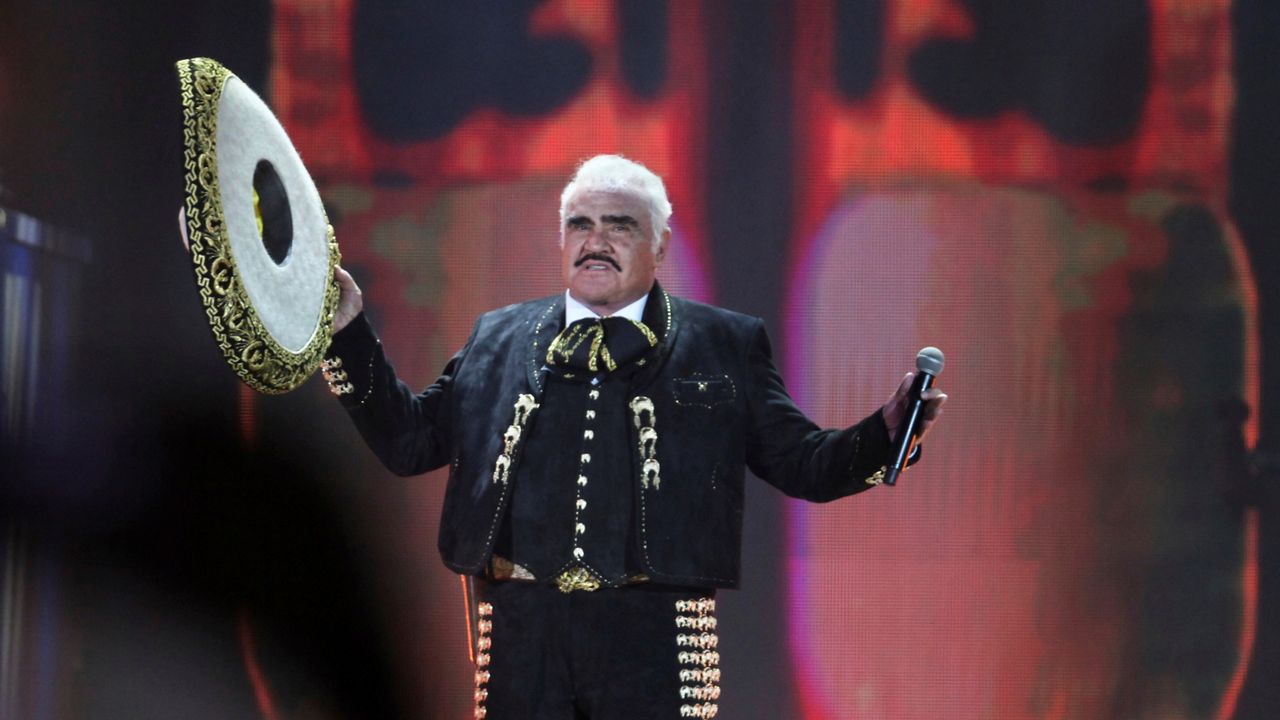 EDITOR'S NOTE: Multimedia journalist Lydia Pantazes spoke with a local artist and musician on Vicente Fernández’s influence and how he is being honored. Click the arrow above to watch the video.

MEXICO CITY (AP) — Vicente Fernández, an iconic and beloved singer of regional Mexican music who was awarded three Grammys and nine Latin Grammys and inspired a new generation of performers, including his son Alejandro Fernández, died on Sunday. He was 81 years old.

Fernández was known for hits such as “El Rey,” and “Lástima que seas ajena,” his command of the ranchera genre and his dark and elegant mariachi suits with their matching wide-brimmed sombreros.

His music attracted fans far beyond Mexico's borders. Songs like "Volver, Volver" and "Como Mexico no hay dos" were extremely popular among Mexican immigrant communities in the U.S. because they expressed a longing for the homeland.

Fernández, also known by his nickname ″Chente,″ died at 6:15 a.m. in a hospital in Jalisco state, his family said. Funeral plans were not immediately announced. In August, he had suffered a serious fall and had been hospitalized since then for that and other ailments.

Beginning early on Sunday, people began posting messages, many of them recalling the lyrics to one of the favorite mariachi requests at parties and restaurants that goes, "I am still the king."

Music greats such as Gloria Estefan, Ricky Martin, Pitbull and Maluma took to social media to post heartfelt condolences, some citing how his music influenced them. Famous country singer George Strait said he was "one of my heroes."

"I am broken hearted. Don Chente has been an angel to me all my life," Ricky Martin said. "The only thing that gives me comfort at this moment, is that every time we saw each other I told him how important he was to me."

Meanwhile, outside the hospital where he died, fans began arriving Sunday carrying photographs with the singer and belting out his best hits.

The timing of his death was also highlighted by fans as Fernández often sang on Dec. 12 to mark the Catholic pilgrimage to the Basilica of Our Lady of Guadalupe in Mexico City, an event that attracts vast crowds. The commemoration was being held on Sunday after it was canceled last year because of the pandemic.

Vicente Fernández Gómez was born on February 17, 1940, in the town of Huentitán El Alto in the western state of Jalisco. He spent most of his childhood on the ranch of his father, Ramón Fernández, on the outskirts

The artist sold more than 50 million records and appeared in more than 30 films. In 1998, he was given a star on the Hollywood Walk of Fame.

In April 2016, he said goodbye to the stage before about 85,000 people in Azteca Stadium in Mexico City. Spectators had traveled from northern Mexico as well as the United States, Colombia and other Latin American countries for the occasion.