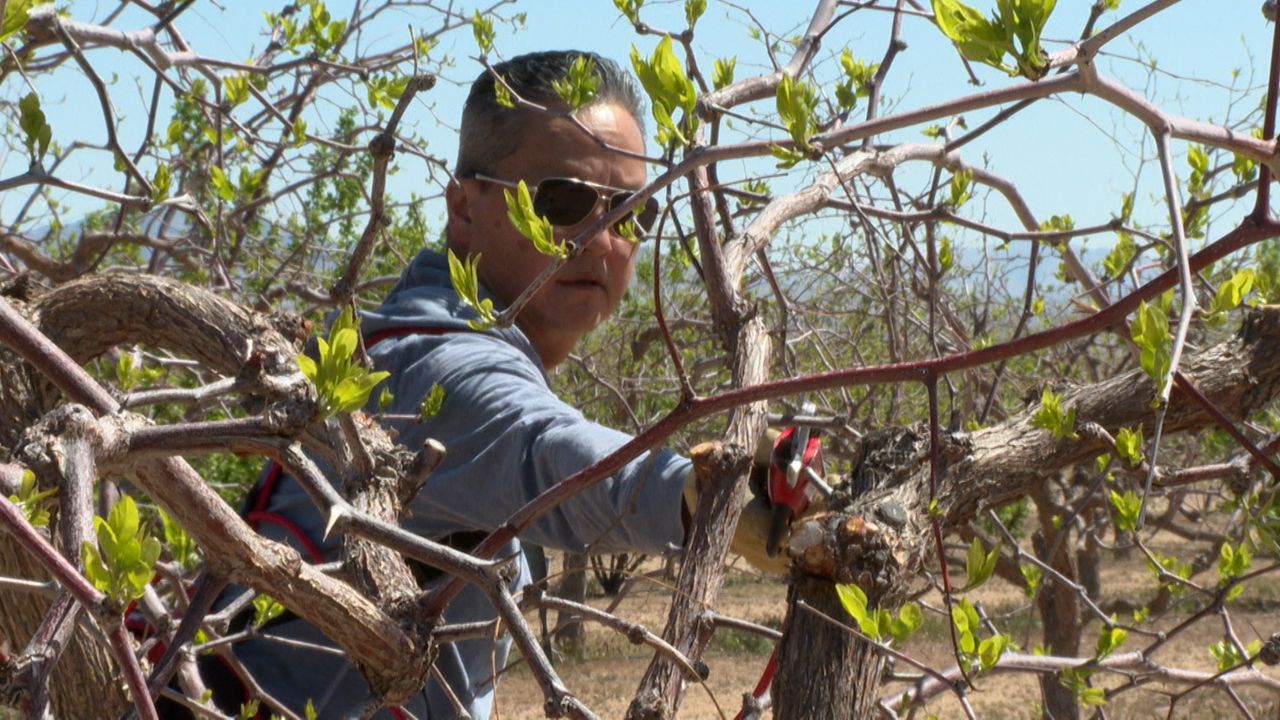 SoCal farmer sees many parallels to his life in 'Minari'

LUCERNE VALLEY, Calif. — Minari, or in Korean, 미나리, is a type of green weed-like vegetable that is used in Korean cooking.

The Oscar-nominated film "Minari" is the story of a Korean man and his family who move to a rural area in the South to start a farm. A real-life farmer in Southern California grows a different crop than the one featured in the movie’s title but says he felt many connections to the film and his life.


David Paeng of Serenity Farm grows what is called 대추 in Korean, or jujube in English. Jujubes are a fruit that can be found at many Korean celebrations, from weddings to 100-day birthdays. It’s a crop he’s grown for the past six years at the 20-acre farm in Lucerne Valley.

At Serenity Farm, there are no days off. Paeng explained that the first three years of his farming career, he worked the entire farm mostly by himself. While he has since hired one full-time employee, still, there are really no days off.

It’s a career that you could say was unplanned for the farmer. Paeng’s mom purchased the farm several years back, but there was nobody to tend to the 1,350 jujube trees on the land. And that’s where Paeng said he came into the picture, although it wasn’t really by choice.

"I didn’t want to do the farm. I didn’t know anything about farming," Paeng said laughing, "I like the country life. But this is really, really quiet out here."

Paeng added that in reality, he had no choice but to step up to help out his mom fulfill her retirement dream to have a farm.

"I can’t have a stranger or somebody else managing my mother’s farm by herself. So, I said, 'Fine, I’ll do it.'"

With that, the former salesman suddenly became a farmer — the first one in the family. And now he lives in quite a different place surrounded by 20 acres of land.

Paeng explained with a chuckle that he is living in the neighborhood from the film "Minari."

"Exactly like that movie, so, it’s a struggle," he said.

While some of the connections between Paeng’s life as a farmer and a film about farming might be obvious, Paeng noted that much of what resonated with him in the film was subtle. For example, he is a Korean American who immigrated to the U.S. at the age of 4.

"The first scene just got me," he said. "The music was perfect. The scene with the boy looking out the window of the car brings back a lot of memories when I was a kid."

As Paeng explained, from the feelings of loneliness in the film to the family relationships to the mannerisms of the character, nearly every part of the movie resonates with him.

But his deepest "Minari" connection was with the character Jacob, who is the father in the film. The role is played by Steven Yeun, who is the first Asian American up for a Best Actor Oscar. (Actress Yuh Jung Youn, who plays the grandmother, has also become the first South Korean woman to be nominated for an Academy Award for acting.)

The real-life farmer explained the connection he felt to the struggles of Jacob, plus his relationship with his wife, and the blood, sweat and tears Jacob puts into the family farm.

"Sort of painful to see that he was doing this by himself," said Paeng, "It is about survival, too."


At Serenity Farm, that’s what Paeng is trying to do: keep his mom’s dream of having a farm alive. Hand trimming each thorn-filled tree as they start to wake up from winter, he showed the cuts on his arms and one near his jawline on his face.

"I get scratched and poked all the time," he said.

When the trees start growing jujubes, an ingredient also used in Korean chicken soup or 삼계탕, Paeng will also hand-pick each fruit during harvest season that begins in August. He noted that while other jujube farmers may choose to shake the fruit lose and let them hit the ground before harvesting them, he hand-picks everything. He says it makes the fruit taste better.

"It’s my honor and integrity to do," he said. "I’m proud to grow the best jujubes up here."

Plus, his jujubes are certified organic.

It wasn’t easy for Jacob in the film to figure out how to run a farm, and the same goes for Paeng in real life. Paeng said it was a struggle in the beginning adjusting and figuring out the farming thing, and that it continues to be a struggle in some ways. But the challenges won’t make Paeng give up the farming life because he is as resilient as the minari in the film — and the fruit at Serenity Farm.

Paeng noted that the jujubes are full of vitamin C and antioxidants. They also help fight premature skin aging and can help manage appetite, along with aiding in relaxation and calmness, and much more. You can learn more about the fruit here.