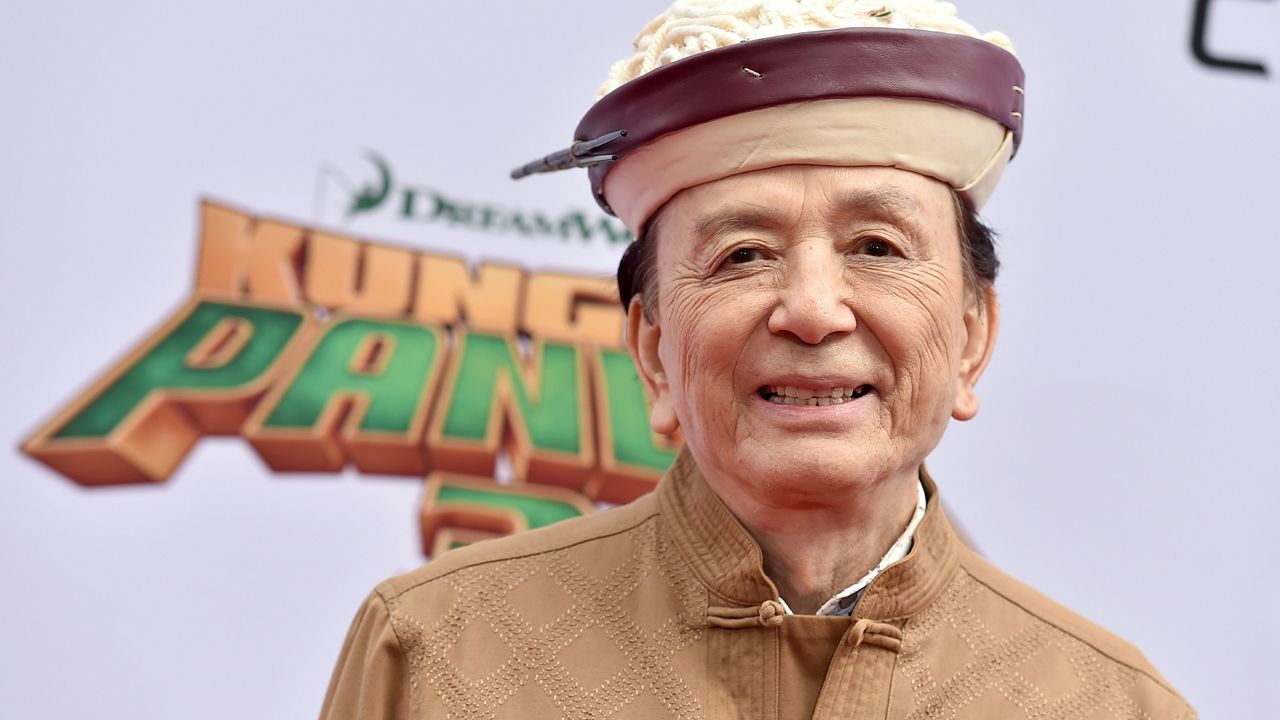 James Hong arrives at the world premiere of "Kung Fu Panda 3" at the TCL Chinese Theatre on Saturday, Jan. 16, 2016, in Los Angeles. (Photo by Jordan Strauss/Invision/AP)

LOS ANGELES — You know his face from…everything. Chinatown. Bladerunner. Big Trouble in Little China. Even Seinfeld. After more than 600 credits — the most of any actor in history — James Hong seems most comfortable when he’s slipping into a character.

“Would you like to hear a few impersonations,” he asked, before launching into some of his favorite from back in the day.

“You dirty, dirty rat,” he says as James Cagney, before switching to Jimmy Stewart, Peter Lorre, even Elmer Fudd. He once did an impersonation of Groucho Marx on The Groucho Marx Show – and was a hit.

“The emcee told me I got the second biggest fan mail ever on Groucho Marx Show,” he said.

Clearly Hong is a born entertainer, with a resume that’s more than six decades long, although he wasn’t always satisfied with the parts he was getting. After a few years of working in film and television, he met with fellow actor Mako Iwamatsu and the two started talking about their careers.

“We were saying, well, ‘what we can we do, you know?’” he recalled. “We’re not getting any roles that are non-cliché and we’re not being accepted. We were only getting the so-called gimmick roles.”

They decided to break from those stereotypical offerings and do a play. In 1965, they founded East West Players, which today is considered the nation’s premiere Asian American theater company.

“Definitely I did not think it would last this long,” Hong said, pointing out over the past 55 years, hundreds if not thousands of students have studied acting with EWP and countless audience members have seen shows there.

Hong has made a name for himself as a prolific character actor. His roles aren’t always big but they are always memorable and he pours himself into each one, like Hannibal Chew, the eye designer in Bladerunner.

“I just treated those eyeballs as if they were my children,” he remembered, examining his gloved fingers as if returning to the role. “I made my life as that eyeball maker and I said to myself, if I spent my whole life making eyeballs then they are my children.”

It’s performances like that that lead to this weekend. On Saturday Hong is being inducted into the Asian Hall of Fame, receiving the Lifetime Achievement Award.

“Actually I don’t know exactly what I’ve done to deserve it but I’ve arrived,” he smiled.

The organization is using the 2020 season to “increase Asian representation and inter-racial narratives” at a time when a UN report finds hate crimes against Asian Americans has reached “an alarming level.”

Hong is no stranger to racism. When he was born in Minneapolis in 1929, the Chinese Exclusion Act was still in place. He recalls looking to buy a home shortly after moving in Los Angeles. It was 1954 in a neighborhood not far from where he lives now.

He and his father were walking up to inquire about the house when suddenly, he says, the next door neighbor emerged. “And shouted, ‘hey, hey, we don’t want Chinese in this neighborhood!” he remembered. He and his father got in their car and left, but, he adds, “if they said that to me now, wow would they get an earful.”

Lately, he sees prejudice seeping back in, especially during the pandemic, and feels the Asian community needs to address it.

“I think it’s very important that we become a people that will speak up and also be seen, because you need that relationship with one another in order to understand each other,” Hong explained.  “It’s like me to you. How can I understand you or you understand me unless I talk to you, right? Unless we discuss things.”

Over the course of his career, he doesn’t think the types of roles he’s been offered have changed that much. “When I first started it was almost all 99% cliché roles,” he said. “Inserted only because they wanted an Asian.” Over the past 10 years he thinks the needle has moved slight. Maybe 10% of the jobs he gets now are what he considers “non-gimmick roles.”

But that’s just his own experience, he stresses. He does see progress. He points to other Asian actors, like Daniel Dae Kim, who he says are breaking the mold.

“He’s probably the symbol of what can happen,” Hong explained.

In August, Kim launched a gofundme campaign to get James Hong a star on the Hollywood Walk of Fame.

“This man epitomizes the term ‘working actor,’” Kim wrote of the 91-year-old, “and that's not even taking into account all he's done to help further representation for actors of color.”

Hong hopes he’ll eventually see his name on that sidewalk, but regardless, he continues working and has no intention of stopping anytime soon.

“I shall never retire,” he scoffed. “I shall die with my boots on and with my SAG card in my pocket.”