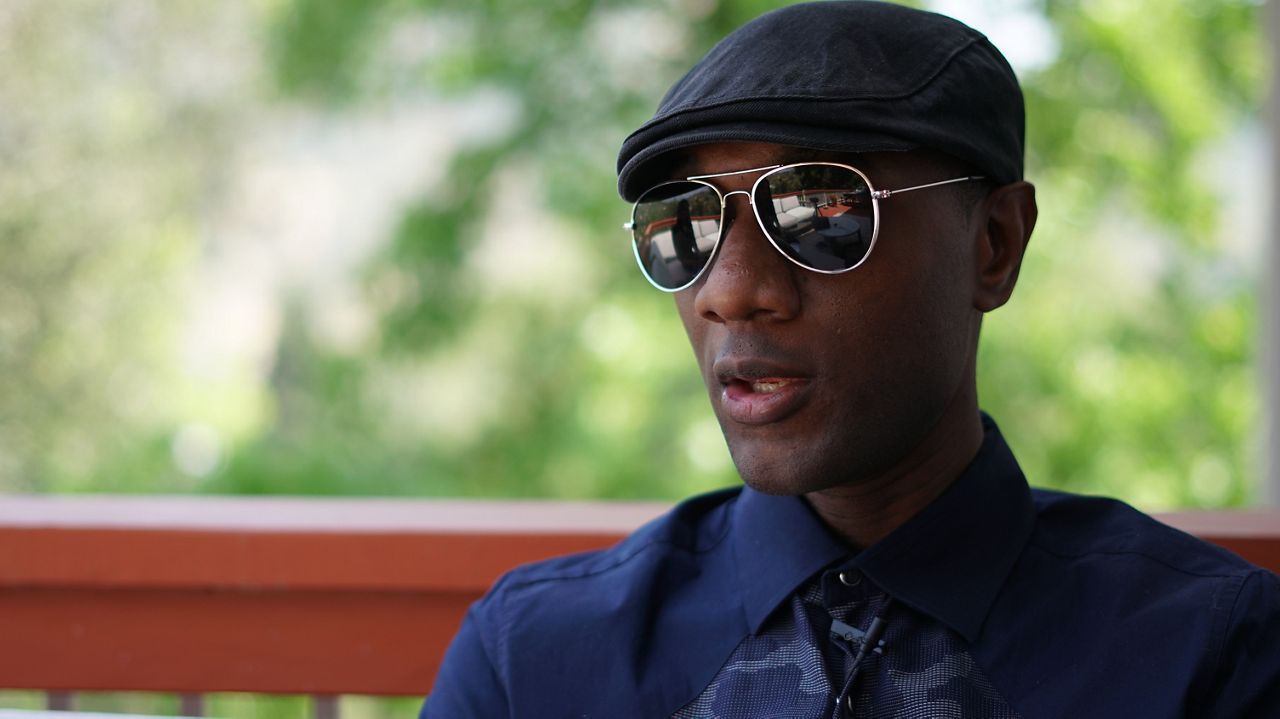 LOS ANGELES – Affirmation. Inspiration. And Motivation. These are the words that can be used to describe the music of Aloe Blacc, the Grammy-nominated artist who is using his platform of music to create meaningful social change.

As we navigate a world where are so many unknowns, musician/singer/producer Blacc has always found his own way. Like many people right now during the pandemic, he is working from home, creating content for outlets; like iheartradio, and continuing to use his platform to push for social and legislative change.

Growing up Orange County, he was one of the few Black students in Laguna Hills. He said he didn’t feel race played much of a role in his upbringing, but there were a few specific instances he remembered.

“One time going to the beach with all my friends, after we graduated from junior high, an entire gang of skinheads confronted us and basically kicked us off the beach, and another time where a police officer came to my house because a bike was missing from someone’s yard in the neighborhood and me being the only Black kid in the neighborhood…I was the suspect,” Blacc said.

His parents immigrated from Panama and instilled a rich cultural diversity that naturally wove into his musical influences. Carving out his own musical path has been part of the Grammy-nominated artist’s journey. As one of the vocal leaders in the music industry, Blacc helped create a music artists coalition.

He said he was “really looking for social justice change and then industry change, racism within the music industry.”

The coalition will give music companies direction and oversight in where they are allocating funds for diversity, as well as specifically targeted social media campaigns for changes in legislation.

“They may be donating for diversity, but is it the diversity that we are actually calling for in the wake of the death of George Floyd?Which is about the movement for Black lives or is it just general diversity, where we are talking about people with green hair? We want to be very specific and very targeted about it,” he said.

Blacc has been tirelessly making calls and strategizing how to galvanize the music industry.

Thanks to @billboard and @vibemagazine for inviting me to this important panel discussing how to use our platforms for social good. #AbolishQualifiedImmunity #defundthepolice #BLACKLIVESMATTER

“We are taking the energy from the streets, to the offices, to the city halls, representatives of congress, nationally and locally," he said.

“Right now there is no deterrent for misconduct. We can talk about eliminating chokeholds, changing policing practices all day long. However, no matter what we do to eliminate and ban certain policing practices, if you don’t create an accountability structure, they will still violate the ban and never be held accountable for violating the ban and violating our rights,” he said.

Many legal experts argue that the policy has become overly broad, ineffective, and unfair. Officers almost never personally pay judgment even when they are found liable, which sends a message that police are above the law.

According to University of Chicago law professor William Baude, of the 30 qualified immunity cases that reached the Supreme Court between 1982 and 2017, just twice did the justices find immunity did not apply to official conduct.

Change is something that Blacc is used to in the ever-evolving music world, which is why his family is his foundation. He shares many passions with his wife Maya Jupiter, who is Turkish/Mexican from Australia. They co-founded Artivist Entertainment together and believe social media is important for the movement as a magnified collective voice for educating others.

“We need to look at care, this is why there is a hashtag #carenotcops, putting money into systems that care, rehabilitate, and nurture communities. In Australia we grew up listening to American music, watching American movies, I mean, they call us the 51st state," said Jupiter. "What happens here has an effect. With the Black Lives Matter movement happening right now, we are also seeing globally communities standing up to oppression happening in their own countries. So it’s really important to see that, yes, it’s a lot, it’s a hurricane happening all at once, but it’s an incredible opportunity.”

With his new album coming out in October, whatever the future holds through this pandemic, civil rights movement, and beyond…one guarantee for Aloe Blacc is that he will be doing it his way.