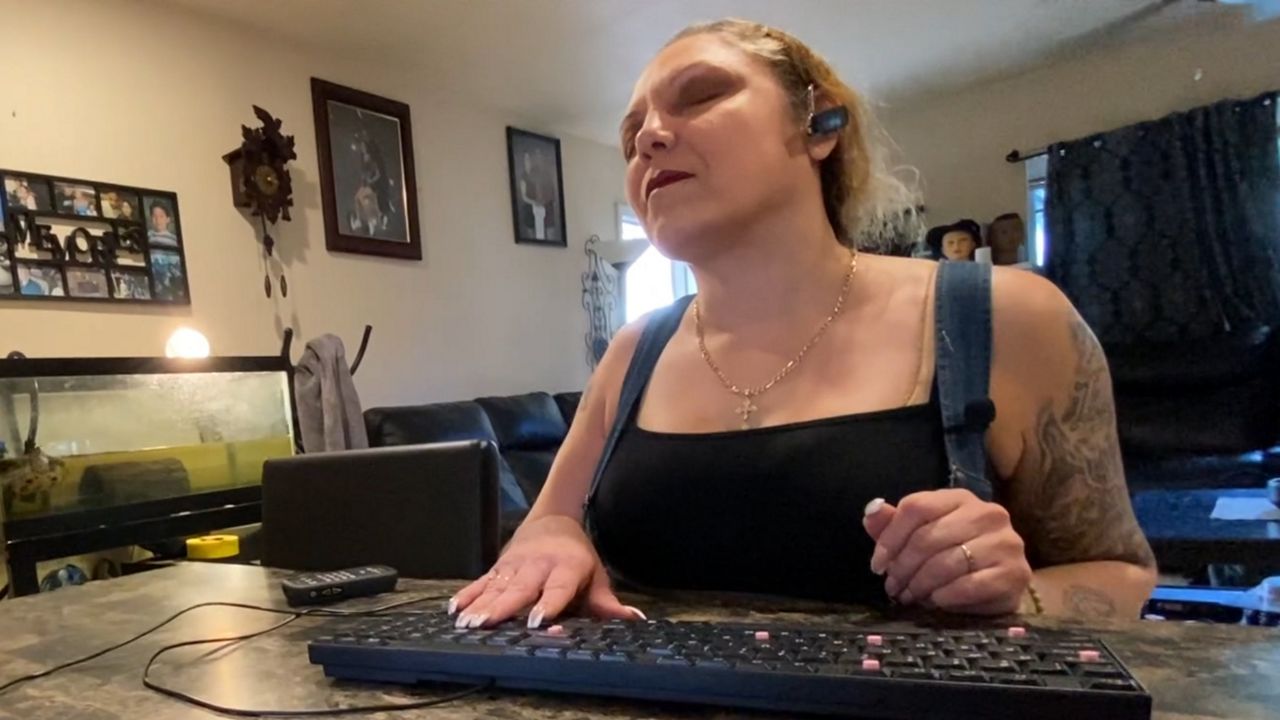 Los Angeles native Virginia Romero says she lost her vision to street violence when she was 18, surviving a gunshot wound to the head. But that didn’t stop her from raising three children or going back to school so she can counsel at-risk youth. (Spectrum News/Renee Eng)

LOS ANGELES — Los Angeles native Virginia Romero, relies on her ears when she wants to see what is on her computer screen. She is blind and uses special screen reading software.

Romero lost her vision to street violence when she was 18, surviving a gunshot wound to the head, but that didn’t stop her from raising three children or going back to school so she can counsel at-risk youth.

“I kind of want to come back and educate the youth and let them know that there is so much more life than the streets, you know, as far as education and jobs and life,” Romero said.

She enrolled at Los Angeles City College to get an Associate’s Degree in Psychology, but she’s been there for seven years. Romero says that’s due in part to the learning challenges she faces as a visually impaired student.

She relies on a voice recorder for class notes, audio software, a tutor and a note taker. She says some professors accommodate her needs — such as describing what they are writing on a board so she can record it — but claims other professors are not as helpful.

“In a way, I kind of wanted to give up, and this is because it had been such a long time that I was in school,” Romero said. “It was very hard for me to come back, especially as a visually impaired student now.”

Roy Payan, a blind student who graduated from LACC in 2018, says he faced similar challenges with some professors and couldn’t access textbooks and websites because they didn’t work properly with a screen-reading software, called JAWS.

Payan and another student, Portia Mason, filed a federal lawsuit in 2017 against the Los Angeles Community College District, claiming it didn’t provide accommodations for disabled students and violated the Americans with Disabilities act and the Rehabilitation Act.

LACCD claims it did not intentionally discriminate against students with disabilities and that it complies with the ADA. The district lost the case twice in federal court and told Spectrum News that it “continues to be in active settlement mediation with the parties involved with the Payan v. LACCD litigation. We remain very hopeful that a settlement can be reached as quickly as possible.”

Payan says he hopes for big changes at the college.

“I want all professors trained on how to make documents accessible and to become familiar with the ADA. I want them to know this is what you’re required to do, this is what is expected of you,” he said.

According to Payan, no settlement has been reached yet and there is one more day of mediation before the LACCD Board meets on April 13, which is when the board would approve a settlement agreement. But if the settlement talks are not successful, Payan says the case may go back to court.

LACCD’s Chancellor Francisco Rodriguez has said that “the district is a strong and vociferous advocate for students with disabilities and we remain steadfast in our primary mission to help our students achieve their higher education goals.”

Payan says having equal access to education is key.

“Our education is what gives us the freedom to move on, to be able to get places, to live our own lives and to be able to contribute back to society,” he said.