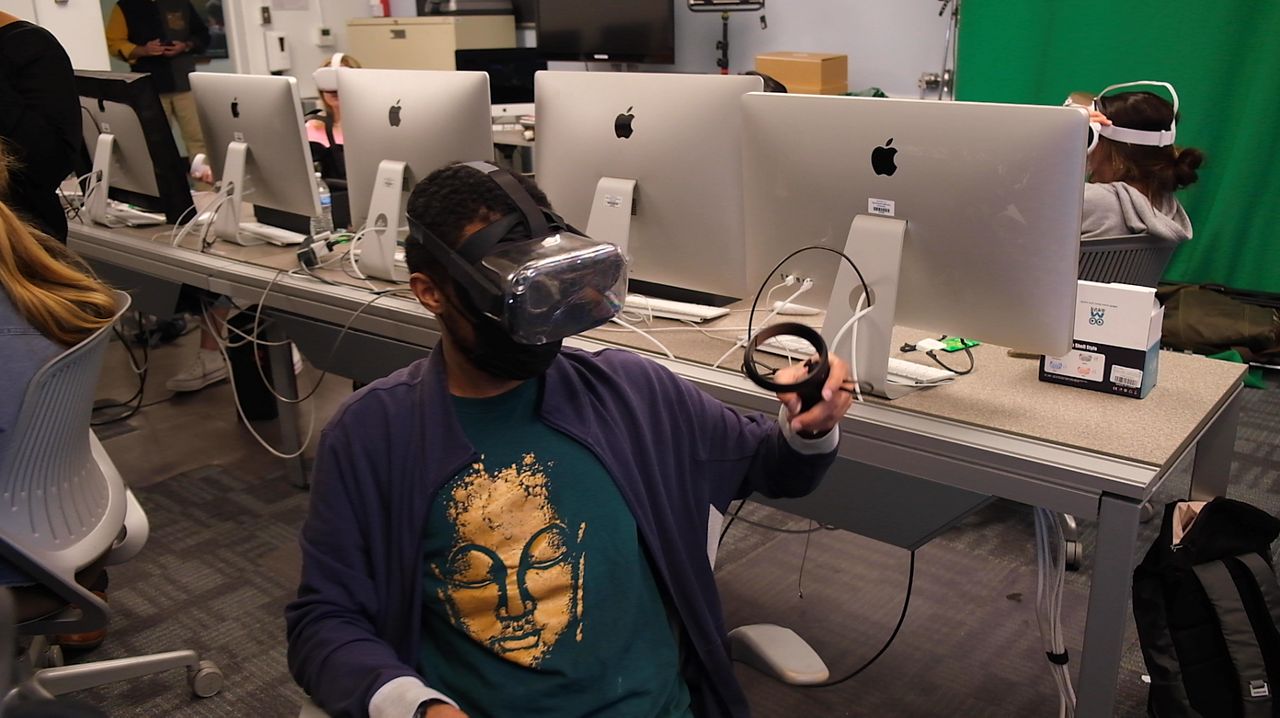 RANCHO PALOS VERDES, Calif. — The pandemic has changed the way we do many things, including how students meet and learn.

At Marymount California University, virtual reality learning is picking up steam as a viable way to augment traditional classroom learning and create safe spaces where students can feel connection despite physical distancing.

Blue Wade leads MCU’s Arts and Media Programs and has been using VR in her media classes. Although VR is far from ubiquitous on campus, she said the educational applications for the technology, which have already been embraced by gamers, show great promise.

“The upside is this has been allowing us to really show creative thinking in action,” Wade said. “So, how do we problem solve using our creativity? How do we get the feeling that we’re all in the same space, even though we might even be in different countries?”

VR is poised to take its place in hybrid learning models to create a more immersive classroom experience while online. Wade’s class has been using software called Goliath through Oculus VR goggles to experience the point of view of a person struggling with mental health issues, which will lead to classroom discussion afterward.

“I love the students knowing where the classroom is, but not having any idea of where they’re going to go because it gives them that element of surprise and wonder. It allows the textbook to come off the page and have an experience,” Wade said.

Grace Lai is a multidisciplinary student at the university who struggles with depression and anxiety and said the immersive point-of-view nature of VR can help better convey the complexities of the human mind, as the character in Goliath does.

“Even if you tell people about [the character’s] struggles, they will not understand because they don’t experience the same problem,” Lai said.

This experiential component of VR can help create greater emotion and empathy, especially for difficult topics like mental health.

“This is a good program for that, for people to understand more about these unique problems,” Lai said.

The VR wave has spread to the humanities, too. Religious studies professor Matthew Fisher said it is particularly good for classes that talk about specific religious sites.

“We use it in world religions, in order to maybe explore spaces that we wouldn’t be able to get to given spacetime constraints,” Fisher said.

Having a 360-degree field of view can help bring those subjects to life in a way that books cannot, but Fisher is quick to add that VR will never fully replace classroom learning.

“We also want to make sure that we don’t treat technology as a panacea to solve all problems,” he said. “This is to augment standard forms of teachings.”

“I was really trying to deepen the learning experience,” Wade added. “It doesn’t necessarily mean that lectures are dead, right? Or that books, God forbid, are dead. But it does mean that this allows us to go further.”

Wade said she was initially surprised when the school made the investment for the twenty Oculus VR headsets they currently have, but now hopes the investment will continue to expand.