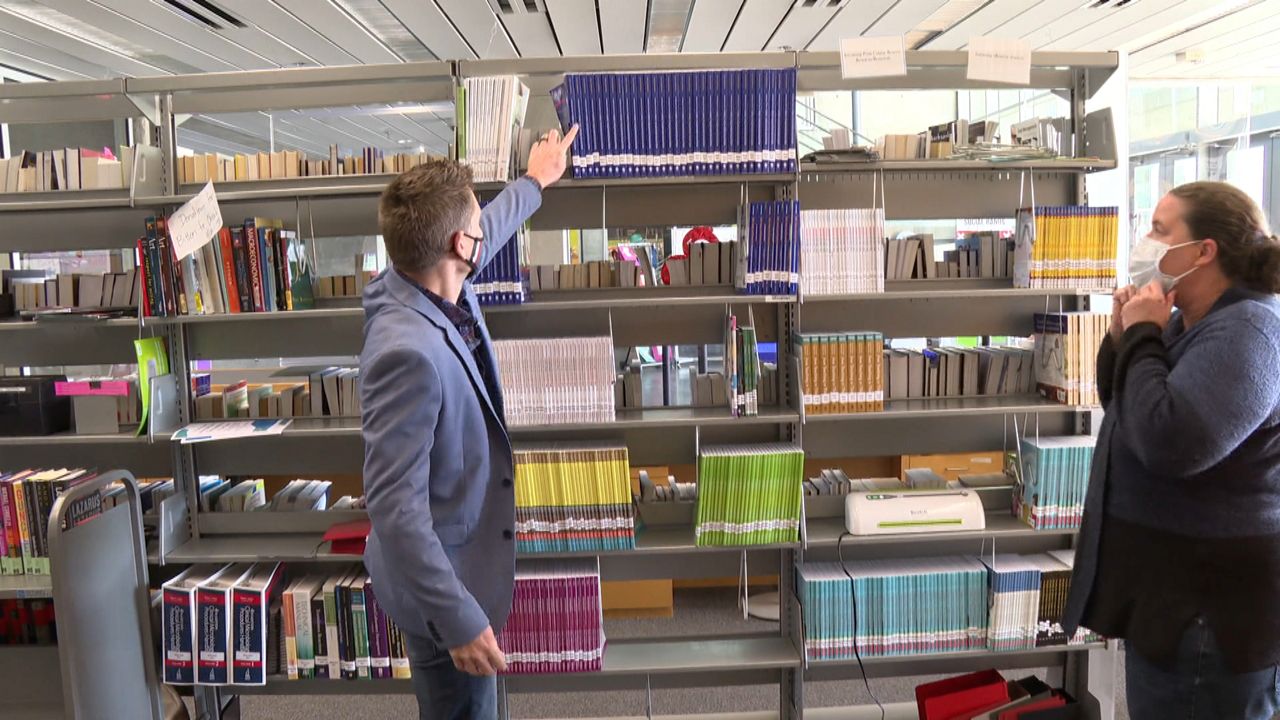 CSUCI Associate Professor, Dr. Jacob Jenkins, left, teamed up with another professor to cut down on the rising cost of textbooks. (Spectrum News/Parker Collins)

CAMARILLO, Calif. — The pandemic threw the American education and economic systems for a loop. That mix is making it even harder for students to cope with one problem that started way before COVID.

The U.S. Public Interest Research Group Education Fund found textbook costs have increased “at three times the rate of inflation since the 1970s.”

A growing number of classes at California State University Channel Islands are becoming purchase-free and it’s possible for a student to graduate without ever buying a textbook.

There’s a special section in the library Associate Professor Dr. Jacob Jenkins knows well, where every book on the shelves is a textbook needed for a class. Some are hard to carry and even harder to purchase.

“It weighs about 500 pounds. I’m sure it’s about $500,” said Jenkins, while holding a particularly large science book.

Jenkins teamed up with another professor to cut down on the rising cost of textbooks. The dream sprouted from a conversation with a star student who suddenly started failing his class.

“That moment it’s changed my life, you could almost say," Jenkins said. "It definitely changed my entire perspective on textbook affordability, access, equity — student equity — that I was talking to this student about not turning in reading quizzes and reading assignments and she was living in her car."

He found a way to make sure all of his class’s reading materials were free from then on out. He’s slowly convincing other teachers to do the same, and it’s working.

Since transferring from community college, Fernando Aguilar hasn’t bought a single textbook while at CSUCI. With that extra money, Aguilar was finally able to purchase a laptop. School without one was hard, but he’s accustomed to sacrifice.

“We grew up in a small, one-bedroom house me and my parents and my two siblings and both my parents worked two jobs our entire life and somehow they still managed to give us everything that we needed, but I just knew that I wanted to go and get a better education so I didn’t have to go through the things that they had to go through,” Aguilar said.

Jenkins estimates the OpenCI initiative saved CSUCI students nearly $1.8 million during the fall semester. Today there are entire majors at the school where students don’t have to pay at all for books.

That can also be what it feels like earning a degree, especially for those like Aguilar, whose parents did not go to college. When there’s someone to help open the door, nothing feels impossible.