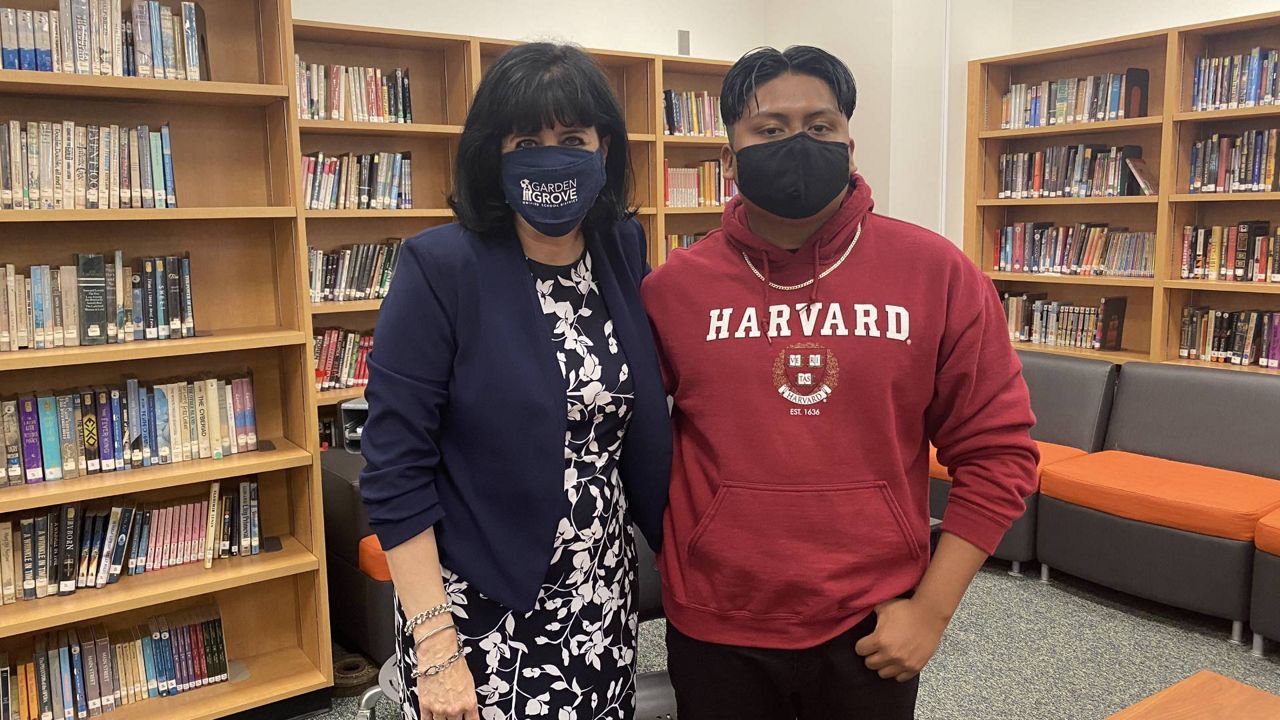 SANTA ANA, Calif. — Sebastian Lozano spent many nights at his desk studying and planning out every step to get him to the moment when he found out he’s going to Harvard.

“Harvard is a big school. It’s one of the top schools. There’s a lot of dreams for everyone. Not everyone gets in, but luckily I was,” said the 18-year-old Los Amigos High School senior.


Lozano is the eldest son and will be the first in his family to go to college. His parents immigrated to the U.S. from Mexico in hopes of building a better life. Lozano’s heart has been set on Harvard since he was a student at Russell Elementary School, now known as Russell Elementary Language Academy.

"In the cafeteria, they have many flags hung up, but Harvard was one of the biggest flags there," said Lozano. "When I learned that it was one of the most prestigious schools, it was an Ivy League, I thought, wow, this school is for me."

Getting accepted into Harvard, however, took more than a straight-A school transcript and being a member of both the swim and water polo teams as well as Latinos Unidos on campus.

“I’d tell people that I want to attend Harvard, and then they’d smirk at me, smile, laugh and say, 'You know that school is only for smart people.' I don’t think they meant it, but not for minorities,” said Lozano.

The student needed a mentor to guide him through a process no one in his family has experienced before.

“I try to be like a second mom, but a pushy mom to my mentees,” said Dr. Gabriela Mafi, who is the superintendent of the Garden Grove Unified School District.

Dr. Mafi has mentored a group of 100 students, including Lozano, since they were in sixth grade. She has created an education plan for each student to attend and afford college.

"You have to meet me halfway," she said. "I’m not saying you have to be perfect. You don’t have to have straight A’s, but you need to be willing to work hard, and you have to have a commitment to go to college."

Garden Grove Unified School District received a 2020 Golden Bell Award for its successful College and Career Mentoring Program, which provides alumni-led mentoring to at-risk sixth grade students at 33 elementary schools across the district. This unique program began as a grass-roots effort fully supported by the Board of Education and led by Dr. Mafi, who recognized a disparity amongst students of high poverty and their realization of college attainment in the future.


As a daughter of a Mexican immigrant who grew up in a rough South Los Angeles neighborhood herself, Dr. Mafi used her personal life to break down the wall between her and her students and built a trust by proving to her students that she cares.

Lozano noted that this six-year, mentor-mentee program pushed him forward and helped him find his passion for math.

“You hear names like Isaac Newton, Frederic Growse. Why can’t you put Sebastian Lozano next to those names? I want to be known for researching and coming up with something new.”

Lozano will graduate from Los Amigos High School this week as the first Latino co-valedictorian at his school in more than 15 years. Of all the things he’ll take to Harvard, none may be as important as the lessons he learned from his mentor.

For more information on the mentoring program, visit here.