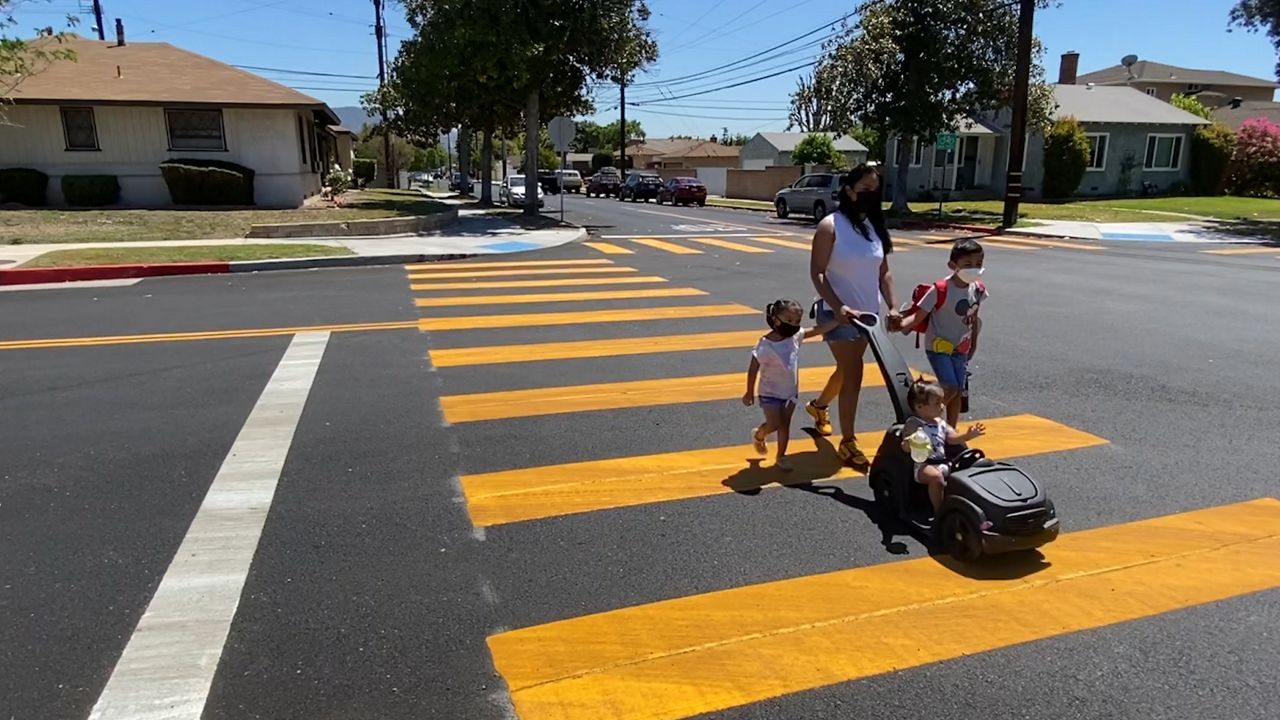 BURBANK, Calif. — Every minute of every day, Mavis Alvarado is learning, her huge brown eyes observing the world around her. She's figured out how to blow bubbles, how to play hide and seek, and she's working on using her fingers to tell people how old she'll be in May.

"Three!" she said, as her brother helped her hold up the correct number of digits.

Three is also the number of kids in the Alvarado family. Big brother Aiden is in kindergarten. His mom Ebenly worked full-time before he was born and intended to return to her office job, but the cost of child care didn't add up.

"It wasn't something that we could financially do," she said. "So I started working from home at that point."

When Aiden was 2.5 years old, he began attending preschool part-time. She stayed home a few hours a day, a few days a week, but even that was a big expense.

"For Aiden's school, we did have to budget," she recalled. "We did have to plan everything out in advance to make sure that was paid for."

She's getting ready to go through those calculations again, this time with Mavis – and again, just part-time.

"Three days for two and half hours, almost three hours," she explained. The price tag? About $320 per month.

That's more than $3,000 a year for less than 10 hours of preschool a week — money that could be earmarked for other things such as groceries, basic needs or savings.

"Our savings now has been….we save up for them to go to preschool," Alvarado said. "And that money would be great to save up and eventually, you know, get a home."

So when she heard the Biden administration was going to be proposing universal pre-kindergarten for all children 3 and 4 years of age, she was both excited and relieved.

"That would be amazing. It would be extremely helpful," she said. "That would be a big financial relief for us to be able to have Mavis in school free, and then for Eleanor as well, and she would be actually able to go five days a week instead of picking and choosing two to three days."

According to the White House, a national pre-K for all program would benefit some five million children, saving the average family about $13,000 a year. Dr. Heather Harris of the nonprofit Child360 said it also levels the playing field for families in a very significant way.

"I'm ecstatic about it!" she said of the proposal. "To provide universal access for all children is monumental. When you think about social justice, and you think about equity and access, this is an amazing start."

Harris, who benefited from a quality preschool education herself, spearheaded the expansion of universal preschool in the Lynwood Unified School District more than 17 years ago. She credits the foundation it provides to helping raise the high school graduation rate in the district from the 50% range to 93%.

"We've invested in so many other programs. Why not early childhood education?" she asked. "We know that by 5-years-old, 90% of the brain is developed, and so we want to set our children up to be successful in life."

Equity and access to quality early education is key to that future success, she said.

"Children not only need it, they deserve it, and so do their families," she added.

And it's not just the families that benefit, Alvarado said. She believes the impact will be felt across the economy.

"All of us. Everybody," she explained. "Not having to make that decision, if I either work and we are a two [income home], or we send our kids and kind of, well figure it out."

And she will figure it out if she has to. She's done it before. But with two more kids to put through preschool, not having to factor in that expense would leave her feeling lighter than air.