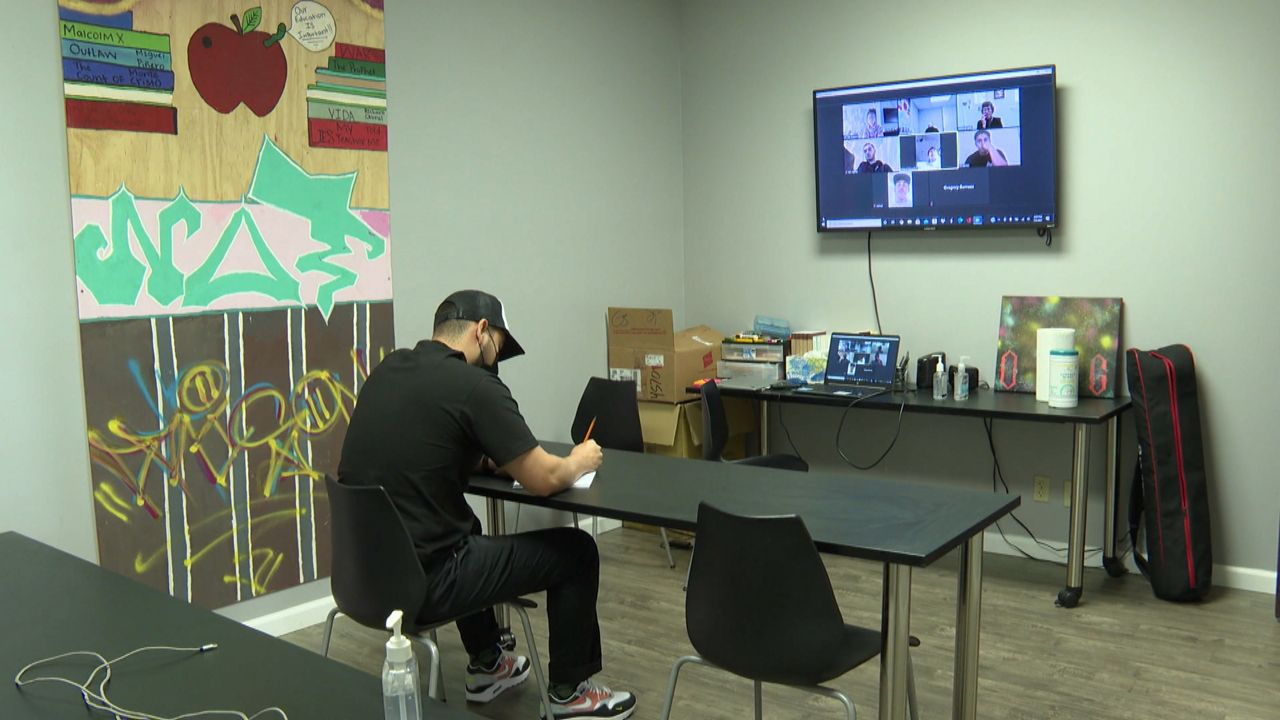 Ronaldo Villeda can’t rewrite his past, but he’s drawing plans for his future.

ORANGE, Calif. — Ronaldo Villeda can’t rewrite his past, but he’s drawing plans for his future.


Villeda was taken out of school after he got into a fight six years ago.

“I was just trying to defend myself,” he said.

He spent nearly four years in Orange County Juvenile Hall where he said kids like him were being prepared for prison.

"I thought they’d help me there," said Villeda. "I quickly learned that wasn’t the case."

He explained how he felt lost until he stumbled on a class taught by a Chapman University professor inside Juvenile Hall.

"I had this epiphany," he said. "I was able to see my trajectory through life, through school, and how certain events in my life basically fast-tracked me to end up in jail or prison."

That professor was Dr. Victoria Carty, who volunteered inside the hall until the county stopped allowing visitors due to the COVID-19 pandemic. Now she is reuniting with former students like Villeda on the outside through a partnership between Chapman and the nonprofit Underground GRIT.

“I wouldn’t rather do anything else on a Saturday than be here with these young people that cherish education, if we can do it in a different way,” said Dr. Carty, an associate professor of sociology at Chapman.

Based in Orange, Underground GRIT assists those who have been impacted by the school-to-prison pipeline through services like education, mentorship, vocational training, and mental health support. According to the American Civil Liberties Union, California spends more on corrections than on crime prevention programs, which studies have shown reduces the rate of re-offending.

“It would be surprising to a lot of people in society if people are given options and a chance, but a lot of students in our program just feel like they’ve been denied that chance, and there’s just nowhere else to go and nothing else to do,” said Dr. Carty.

The professor added that their goal is to give Underground GRIT students a chance to learn side-by-side with Chapman students. However, the economic crisis caused by the pandemic is affecting the university.

"That’s going to take a little while to rectify, so right now I’m working on writing grants so I can get funding for the students to get Chapman credit that way, but Chapman right now just doesn’t have the money," said Dr.Carty. "So we’ll continue with the certificate program."


Villeda is one of many students who is virtually attending Dr. Carty’s sociology class that she has adapted into an eight-week certificate course with an emphasis on class and race. Villeda is interested in both of these subjects. He dreams of attending Chapman someday and is currently debating either pursing business or studying policy.

"It shows me that people really do care because, for a long time, I thought nobody cared," said Villeda. "If you’re a kid and you do that, and you erect these walls, it’s very hard to break them down."

He admits to making some wrong turns in his life, but he is choosing to turn to education now because to him, knowledge is power.

Dr. Carty added that this partnership wouldn’t be possible without administrative support.

"As a guest speaker, President Daniele Struppa got trained to teach math, and he’s willing to teach it at Underground GRIT," she said. "He’s not just supportive from an administrative point of view, but also from a humanistic point of view by encouraging us and willing to volunteer a couple of hours a week so he can teach math, which is something we’re lacking."