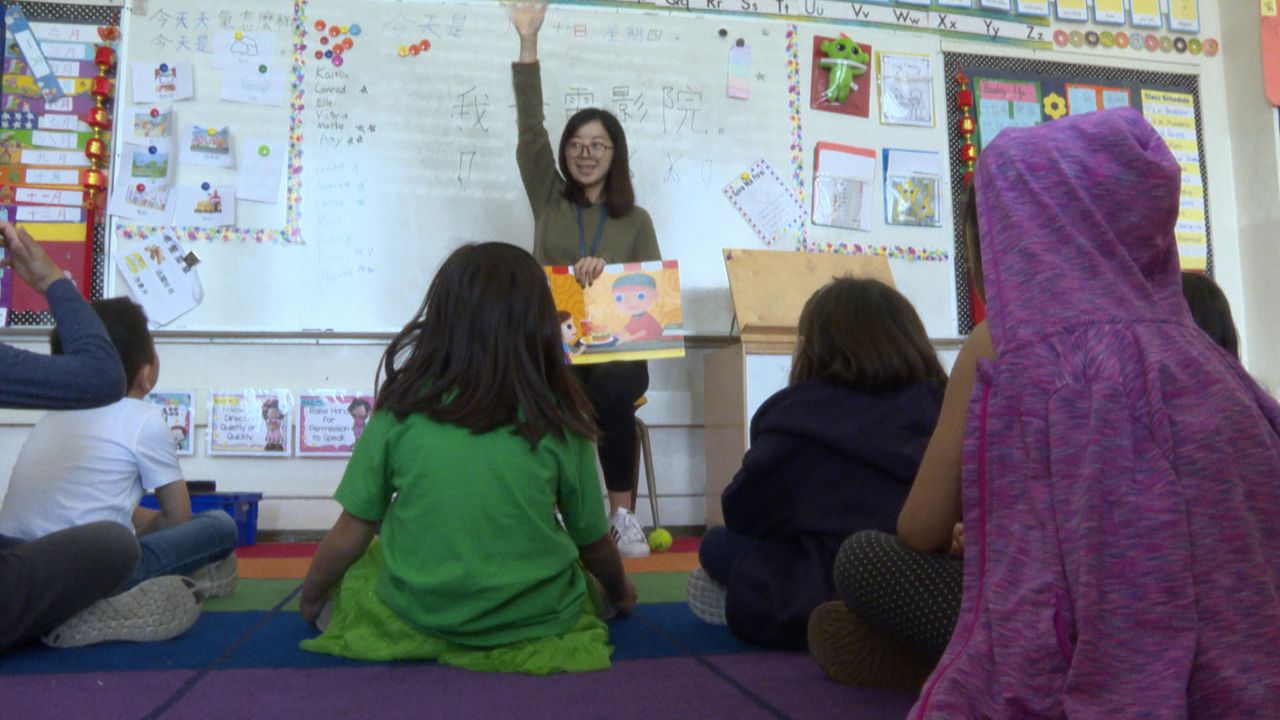 Kindergartners at Chapman Elementary School learn how to say the names of places in Mandarin. (Spectrum News)

Language Immersion Programs on the Rise in LAUSD

Previously, kindergarten was about learning “one, two, three” but in many schools it is now “uno, dos, tres,” as dual language programs, where students learn English and a foreign language together, explode in Los Angeles Unified School District.

School leaders said they are seeing unprecedented demand for foreign language programs that immerse their youngest students in a second language. To meet the demand, district will open 43 more programs in 2019, bringing the total to about 180.

“For me, there was no greater gift to give my child than more advantages,” said parent Barbara Murphy, whose daughter is enrolled in the first Mandarin-immersion program in the South Bay at Chapman Elementary School in Gardena.

Murphy, who used to work in the global banking industry, is part of a cultural shift driving change in LAUSD. It was just 20 years ago that Californians passed Proposition 227, which mandated “English only” education in schools. Voters repealed the measure with Proposition 58 in 2016, opening the door to more immersion programs.

Campuses are following suit with classes for kindergartners in Mandarin, Spanish, Korean, Armenian and other languages. Each participating kindergarten typically spends half their day learning in the foreign language and half in English. The kids stay together through the fifth grade with the goal of literacy in both languages.

Murphy’s daughter, Callan, was already learning Mandarin in preschool when she saw a flyer about the new program at Chapman.

“Quite honestly, I was so excited about it, I didn’t even look at the academic year,” Murphy said. “I just saw the program and ran.”

Chapman Elementary School’s inaugural class was supposed to begin in 2019, but enthusiasm from parents like Murphy pushed the opening sooner.

“When I learn more languages, I get to speak to more people in my family,” said Callan Murphy, who speaks Taiwanese at home and Mandarin to extended family members from Asia.