LOS ANGELES — Both candidates in the Los Angeles City Council Fourth District race, incumbent Councilmember David Ryu and challenger Nithya Raman, were pounding the pavement on Election Day, each visiting multiple vote centers in a last-minute attempt to sway voters heading in to cast their ballots.

The race has been hotly contested and drawn national attention and endorsements. On Oct. 10, Sen. Bernie Sanders gave Raman his endorsement. Days later, Ryu announced that he had the endorsement of Hillary Clinton.

At midday on Tuesday, Ryu had joined his table team at the La Brea Tar Pits voting center to greet voters. 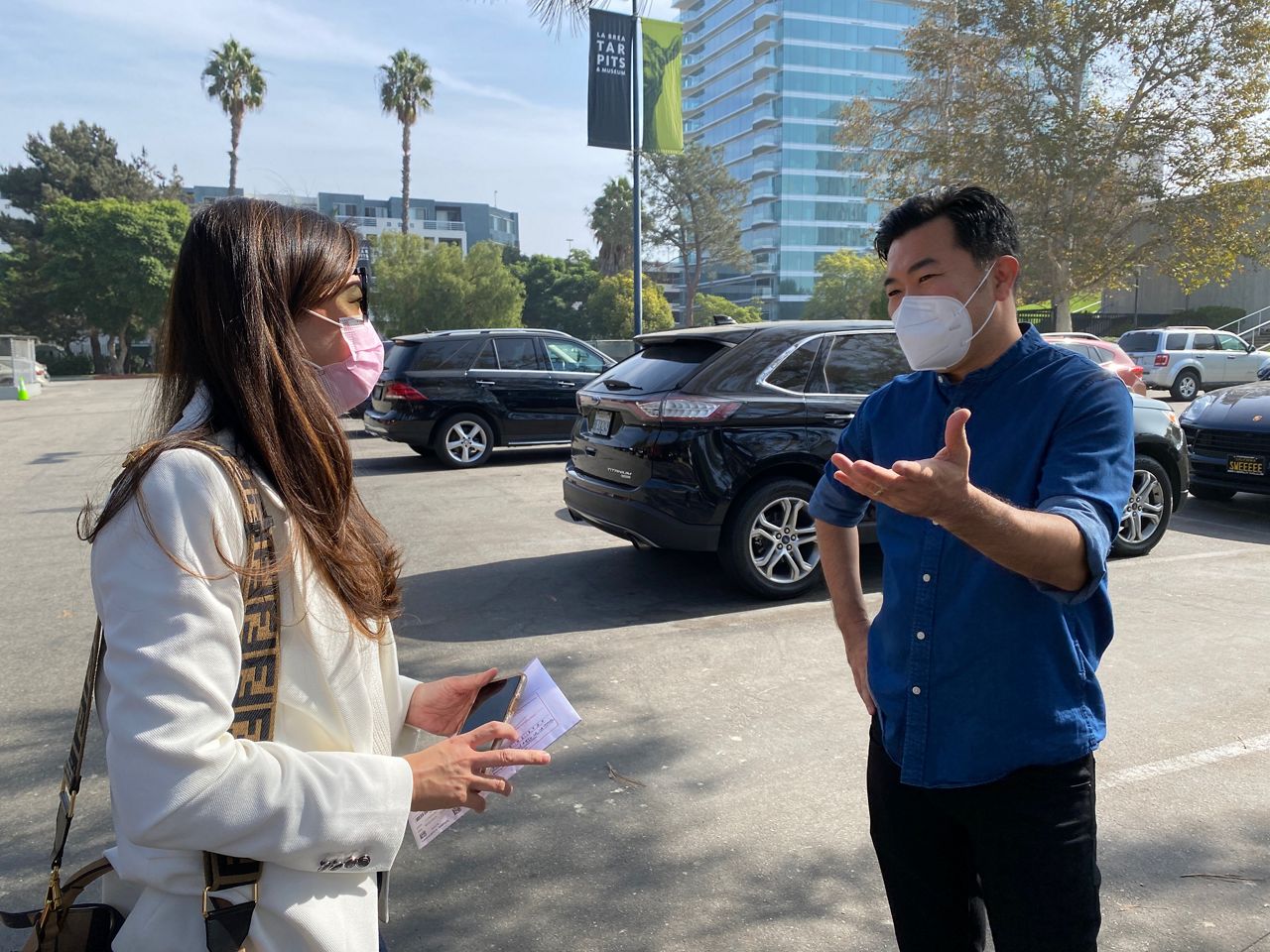 But part of the challenge has been that, even with the inescapable push to get out the vote on all forms of media, there are still voters who are in the dark about the CD4 race.

“Meeting me for the first time, they don’t know who I am, who my opponent is, or what a council member is or does,” Ryu said. “But luckily, it’s a lot fewer than before.”

Council District 4, like so many Los Angeles City Council districts, covers a hugely expansive area, from Koreatown and Mid-Wilshire to the south, stretching up to North Hollywood, then west to the 405 and east into Silver Lake. All told, the Fourth District represents about 275,000 people, Ryu said — enough that, if it seceded from Los Angeles, it could be the 14th largest city in California.

Ryu acknowledged that the city is working on an antiquated form of government — that the last update to the city charter, in 1925, led to the one mayor, 15 representative City Council.

“Do we want to look at the structure of L.A.? Do we want to expand it? To contract it?” It’s not just about exposing and resisting corruption among the council, Ryu said, but about easing city processes for voters.

The race has been hotly contested, and unusually so for a local election. As of the most recent campaign finance statements, Raman has actually out-earned Ryu in total contributions — about $680,500 to Ryu’s $595,200. And according to Raman, about $172,000 of that comes from donations totalling under $100.

Ryu bristled when asked if Raman had pushed his campaign and his issues leftward, as when the Los Angeles City Council voted to establish a pilot program sending counseling specialists to non-violent calls to police.

“There’s a lot of misinformation out there, trying to paint me like a conservative Republican, a 70-year-old white guy,” Ryu said. He touted his bonafides as a crisis counselor, working in South L.A. to mediate conflicts among racial divides following the Rodney King uprising.

Raman, speaking from the Hollywood Bowl voting center at her own campaign table later on Tuesday, responded by saying that Angelenos have very progressive values — and that the City Council has not reflected those values. 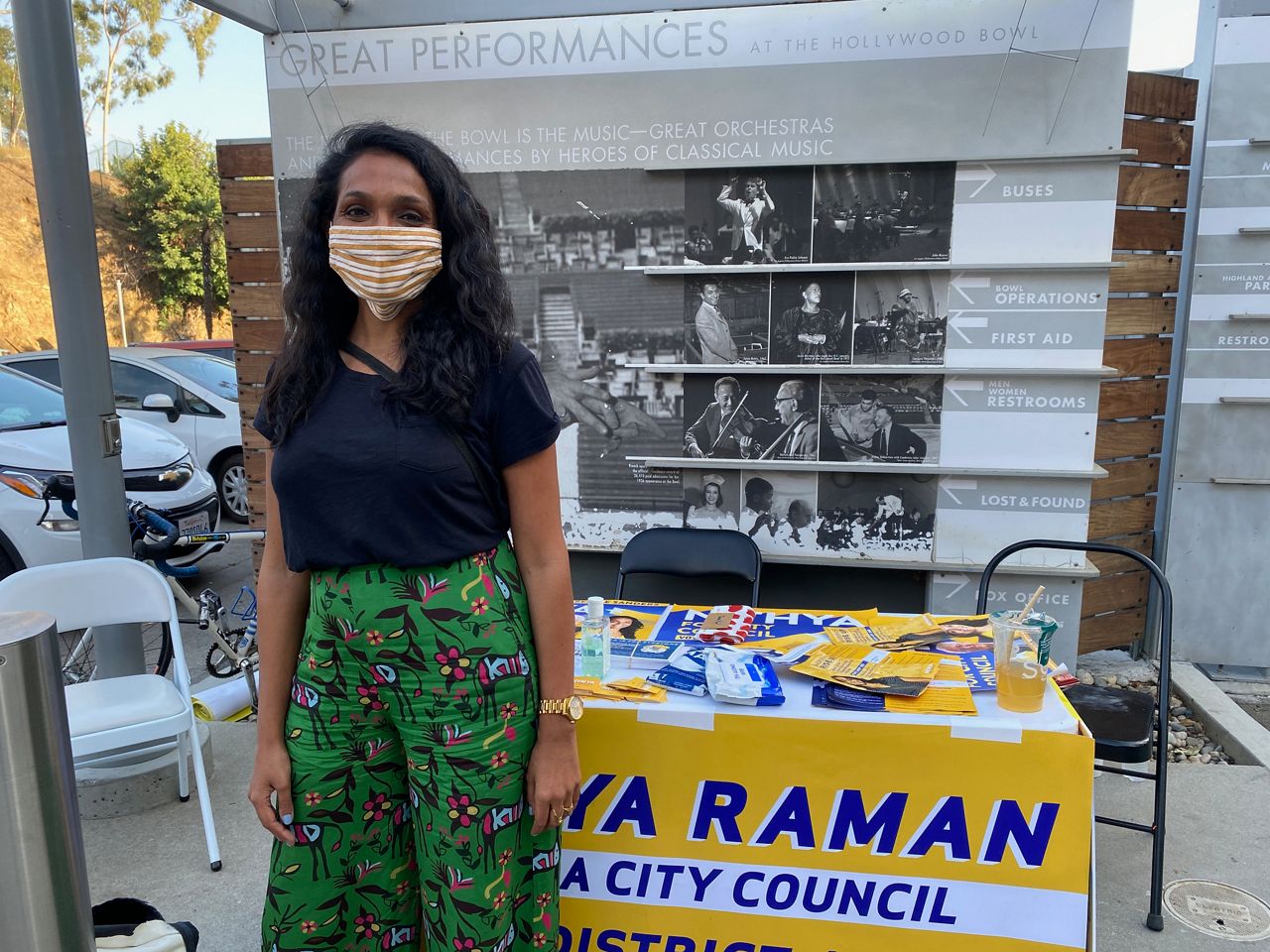 “We haven’t seen tenants rights in action, the kind of support that you need for people experiencing homelessness; we’ve been sending police for decades, instead of providing the kind of care that people need to really get off the streets,” Raman said. “My campaign was, in a way, a response to that gap” between resident values and the Council’s actions.

Raman came to the race with a background as an urban planner and as a progressive advocate, co-founding the SELAH Neighborhood Homeless Coalition. Many of those volunteers, she said, have joined her campaign as well.

Raman’s campaign has taken great pains to be an educational one, going so far as to hold “teach-ins” via Zoom, explaining the historic politics of Los Angeles and California at large.

“Hopefully I win. But even if I don’t win, we’ve energized and engaged … tens of thousands of people who are voting in a municipal election for the first time, who understand who they’re voting for, and who understand what their city is supposed to be doing for them and for every resident around them. And now they’re going to hold them accountable.”