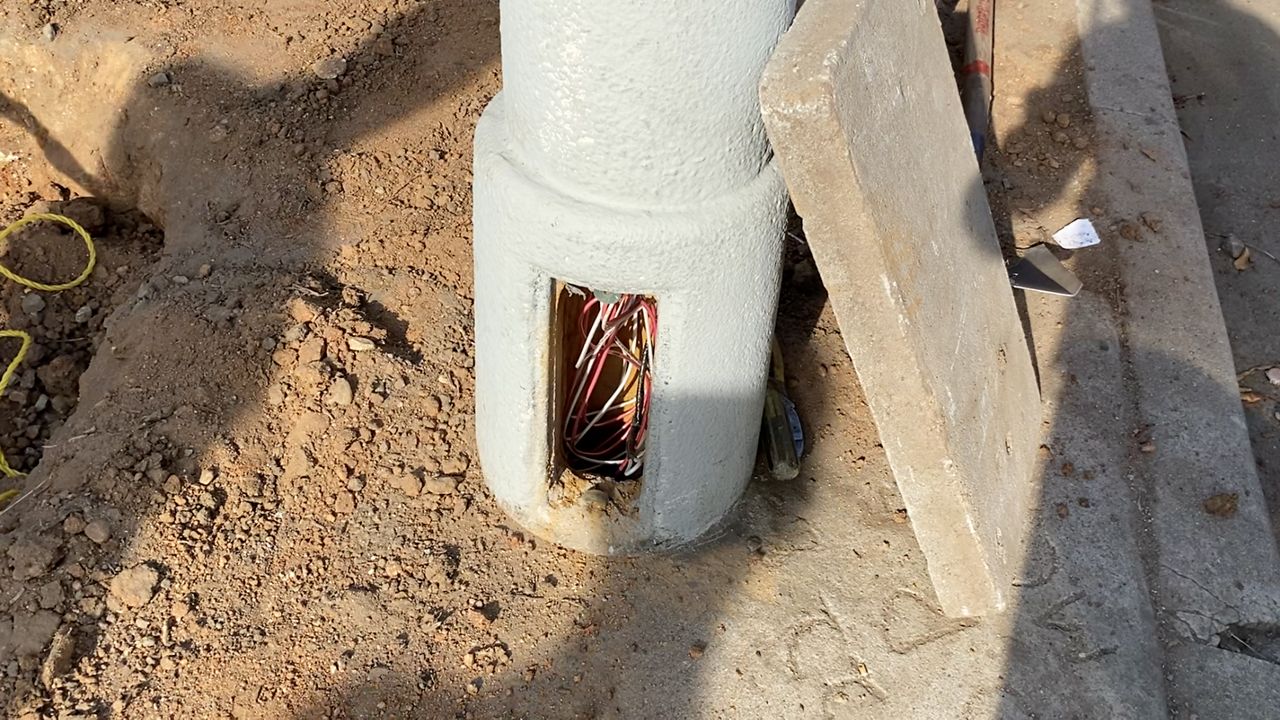 LOS ANGELES — Each morning before the sun rises, Ilyanne Morden Kichaven takes her dog Duke for a walk, but recently these walks have gotten a lot shorter. That's because the street lights in her neighborhood have been out for about two weeks.

"If you're out walking your dog or even just coming home late or driving on the street late at night it is very, very dark and you just don't feel safe," she said.

Kichaven and her neighbors are the victims of copper theft. It's not just a rise in crime they worry about; it's an increase in the wildlife coming into the neighborhood.

As she walks over to one of the lights on her street, she says, "this is one of the lights that's out, when we came out in the morning you can see that the box is still open." An access point is open at the bottom of the light, where the copper was cut to be pulled out.

It's a crime that costs the city of Los Angeles $3.9 million per year.

Miguel Sangalang is the director of the Bureau of Street Lighting for the city of Los Angeles and says, "some of these incidents, it's almost like someone stealing your car, $20,000 car straight out of your driveway."

It's an expensive crime, and it's happening a lot more. Between July 1, 2017, and June 30, 2018, 50 street light copper theft incidents were reported per month, but the numbers dramatically increased from July 1, 2019, to June 30, 2020, when 219 incidents were reported per month. Fixing the damage caused by copper theft is labor-intensive, expensive and could take weeks depending on the damage caused to the lights.

"We've had incidents in South LA, unfortunately, where we had crews out there for three weeks to try and get a block on just to the extend of damage that was there," Sangalang said.

The Bureau of Street Lighting is trying new methods to prevent copper wire theft, for example, sealing off access points with cement. Still, they need neighbors to become their eyes and ears reporting any suspicious activity near street lights or calling 311 immediately if the lights on your street are out.

As for Kichaven and her neighbors, they've been told it'll take three to six months to repair their lights. Something she says is unacceptable.

"That anxiety and that tension, it's really not OK, and I have to tell you, it's very very disappointing."

Kichaven said she just wants to be able to walk around her neighborhood in the evening or early morning and feel safe.