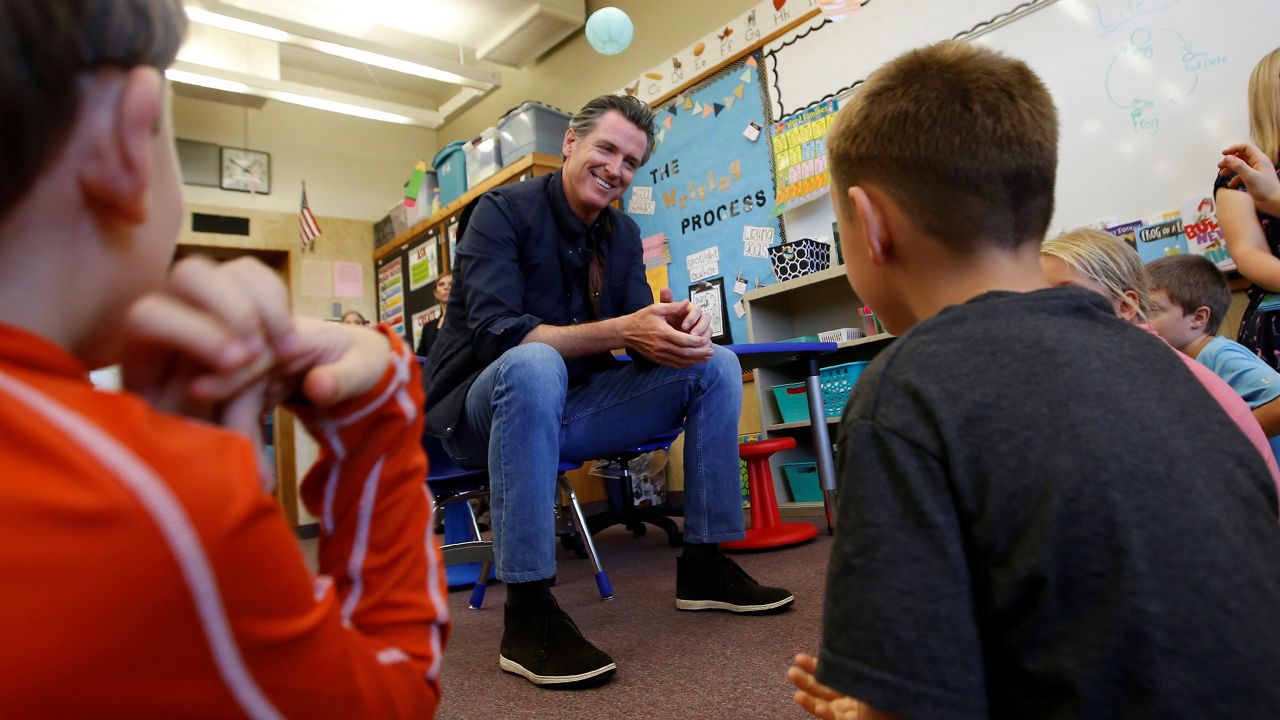 OC school board to sue Newsom over mask rule for students

SANTA ANA, Calif. (CNS) — The Orange County Board of Education plans to sue Gov. Gavin Newsom over the state's mandate that K-12 students must wear masks indoors for the upcoming school year.

The board voted Tuesday night to pursue a legal challenge to Newsom's ongoing assertion of emergency rule-making powers due to the coronavirus pandemic, specifically the school mask mandate, which was issued last month.

"When necessary, the board will fight to protect the health, safety and welfare of our county's kids at school. Unfortunately, with the governor's most recent action to force Orange County's children, even those as young as 5 and 6 years old, to endure an academic year covering their faces for hours on end, the time to fight has come again," according to a statement posted on the board's website.

"Putting aside for the moment the lack of a sound medical or scientific basis for the governor's requirement to mask school children -- who in general are neither at risk from COVID-19 nor likely to spread it — and also putting aside the lack of any thoughtful, well-considered and transparent balancing of the substantial harms of forced masking of juveniles against the purported benefits, the governor and his state-level executive agencies do not have the power to continue the state of emergency indefinitely, and to continue to suspend the Administrative Procedure Act to circumvent normal agency rule making requirements," the statement continues. "Indeed, the California Emergency Services Act (Cal. Gov't Code Sec. 8629) requires the governor to `proclaim the termination of a state of emergency at the earliest possible date that conditions warrant.'

"On June 11, 2021, the governor announced that actions of Californians over the prior 15 months 'had successfully curbed the spread of COVID-19,' and he rescinded his 'stay-at-home' order. But while conditions clearly warrant the end of the state of emergency, and the governor effectively has announced as much, the governor has refused to give up his emergency powers. And he has now misused that power in a way that threatens serious harm to Orange County's children."

Newsom's office did not immediately return a request for comment. He has been adamant about ensuring safety of students and staff returning to in- person instruction — including through mask-wearing.

Dr. Dan Cooper of UC Irvine's Institute for Immunology, who has been active in the university's COVID-19 pandemic research, disputed the board's statement that children are not at risk from the coronavirus.

"That's a falsehood, that's incorrect," the pediatrician told City News Service. "We've learned that children are at risk of COVID. Yes, it's a milder disease, but to say they're not at risk is a crime. It's a lie."

Cooper noted that "even with the Alpha variant there were plenty of kids who got quite sick and we don't even know the long-term consequences. Yes, thank God, the death rate is low, but dying is not the only comorbidity. There are kids who get influenza who end up in ICU who have lung disease for the rest of their lives."

Cooper also disputed that children are not vectors of the disease.

"Kids do spread it," he said. "Most of the data is from the Alpha variant, which isn't around anymore, so we don't even know how bad this spreading is going to be now with Delta."

Cooper noted that in Israel, where 80% of the adult population is vaccinated, school officials are requiring masking in classrooms.

Cooper has been a consistent vocal advocate of keeping children in schools for personal learning. He led a research project that investigated how the Roman Catholic schools opened up classrooms and mitigated the spread of the virus. He also rejects any argument that face coverings are harmful to children.

"Show me one paper that identifies substantial harms of masking," Cooper said. "I dare them to show me one single paper that says children were damaged because we asked them to wear a mask."

Cooper is worried that the board's move will further inflame tempers among parents who disagree on vaccination and masking, which will lead to more tension on campus among children.

"In my opinion, as a physician, it's not helpful," Cooper said. "It's malicious."

"That is all political theater," Foley said. "The courts themselves are requiring masks. So, you know, I don't know how far they're going to get on that one."

Foley added that requiring face coverings for students "is the last restrictive means to protect the public's health, especially the children."

Foley noted that there are 11 children hospitalized at Children's Hospital of Orange County with COVID-19.

Andrew Noymer, an epidemiologist and UC Irvine professor of population health and disease prevention, said it is not true that children are not a vector for COVID-19.

"Kids spread COVID, there's no doubt about it," Noymer told CNS. "It's true they are not as much at risk of symptomatic infection, but that's not the point. The state mask mandate is sound, and I'd much rather see kids in school than at home for a second year."

Noymer said the face coverings are a "great compromise" that ensures in-person learning instead of keeping kids at home for remote lessons.

"But (the school board) is meeting the compromise not with an olive branch but a lawsuit," Noymer said. "I don't think the lawsuit has merit. For it to have merit, they would have to demonstrate harm."

The board said it retained a pro bono legal firm to handle the case, so the challenge "will not incur legal fees to Orange County's taxpayers."

The Tuesday night vote, held during a special session, was 4-0, with board member Beckie Gomez leaving the meeting beforehand, the Orange County Register reported. The board was scheduled to hold its regular meeting Wednesday afternoon.