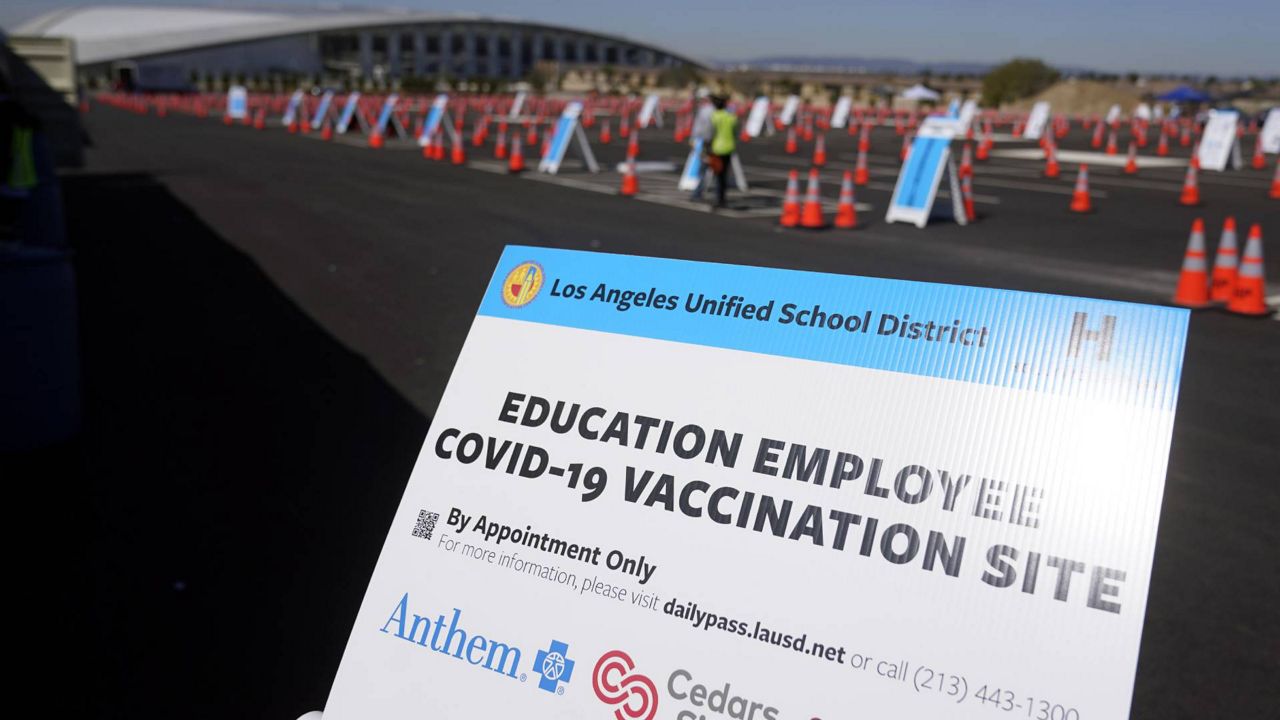 In this March 2, 2021 file photo, a sign is placed at a COVID-19 vaccination site for employees of the LA school district in the parking lot of SOFI Stadium in Inglewood, Calif. (AP Photo/Marcio Jose Sanchez)

CASTAIC, Calif. — The last thing Kristin Payne wanted to do was leave California, but the Castaic mom of two feels she has no other choice than to uproot her family’s lives and move to Texas this summer.

Payne and her husband made the difficult decision during the pandemic because of vaccines — not just the COVID-19 vaccine, but also the others.


"It’s been heart wrenching," said Payne. "It’s just been hard to pull away from the things we’d be grown relationships with and become a part of."

Payne explained that even though she has received immunizations, she doesn’t trust or plan to get the COVID-19 shot. Her bigger concern, however, is her two young daughters and being able to medically exempt them from vaccinations.

At least five vaccines are mandatory in California for K-12 students, and the COVID-19 shot is expected to be added to that list if and when it gets approved for kids under 16.

One of Payne’s daughters was born under three pounds with a rare condition, and Payne is worried how any vaccine could affect her daughter's body. She has chosen not to vaccinate either of her daughters but noted that she is not against other parents vaccinating their children.

“[My daughter] is, in my opinion, not a guinea pig for the medical community,” Payne said. “We have a lot of people in society saying, 'My body, my choice' when it comes to all kinds of things. We have abortion. We have other medical decisions. We feel that it is every parent's right to choose.”

Payne explained how in the past, it wasn’t impossible to find a doctor who would write a medical exemption to vaccines for her daughters, but that all changed when the state’s vaccine mandate went into effect in 2020.

Payne said she can’t find any doctors now who are willing to write her an exemption in California. Under the new mandate, physicians can’t extend more than five exemptions per year, and the state health department will now be reviewing the ones issued. The state can also open an investigation into a doctor that issues exemptions questioned by public officials.

"I have contacted doctors from the top of California to the bottom," said Payne. "We’ve been willing to travel or spend any amount of money it would cost, and there is no doctor providing exemptions for the fear of them having repercussions from the government side of things."

Payne believes that adding the COVID-19 vaccine will make this process even more difficult for parents who don’t want their children to get the shot.

A recent Associated Press poll revealed that about 25% of Americans say they either probably or definitely do not plan to get vaccinated against the coronavirus. However, many schools, universities and even employers are either requiring or plan to require the shot. It could also be required for overseas travel.


Los Angeles employment attorney Jason Marsili has been fielding questions about whether the vaccine can be mandated by bosses.

"Legally, yes," he said. "But it is not such a cut-and-dry question. They can do it, but it’s not without some caveats."

Unlike with K-12 students in school, as Marsili explained, employees of a company can refuse a vaccine based on sincerely held religious beliefs or health conditions, and in general, an employer will have to accommodate or risk a discrimination lawsuit.

"They can accommodate or provide an alternative to the employee," he said. "Like, there can there be a work from home arrangement. Instead of mandating it, it’s a better course of action for employers to recommend the vaccine and make it available to the workforce."

As far as schools go, religious and personal belief exemptions to vaccines were taken off the table in 2016, so if Payne can’t get a medical exemption, she feels she has no choice left but to leave the state. She has already received an exemption for her daughters at their new Texas schools.

"I fully support parents who vaccinate," she said. "I don’t condemn them and I do not wish to be condemned. And I would also say, if your child is vaccinated, what do you have to worry about?"