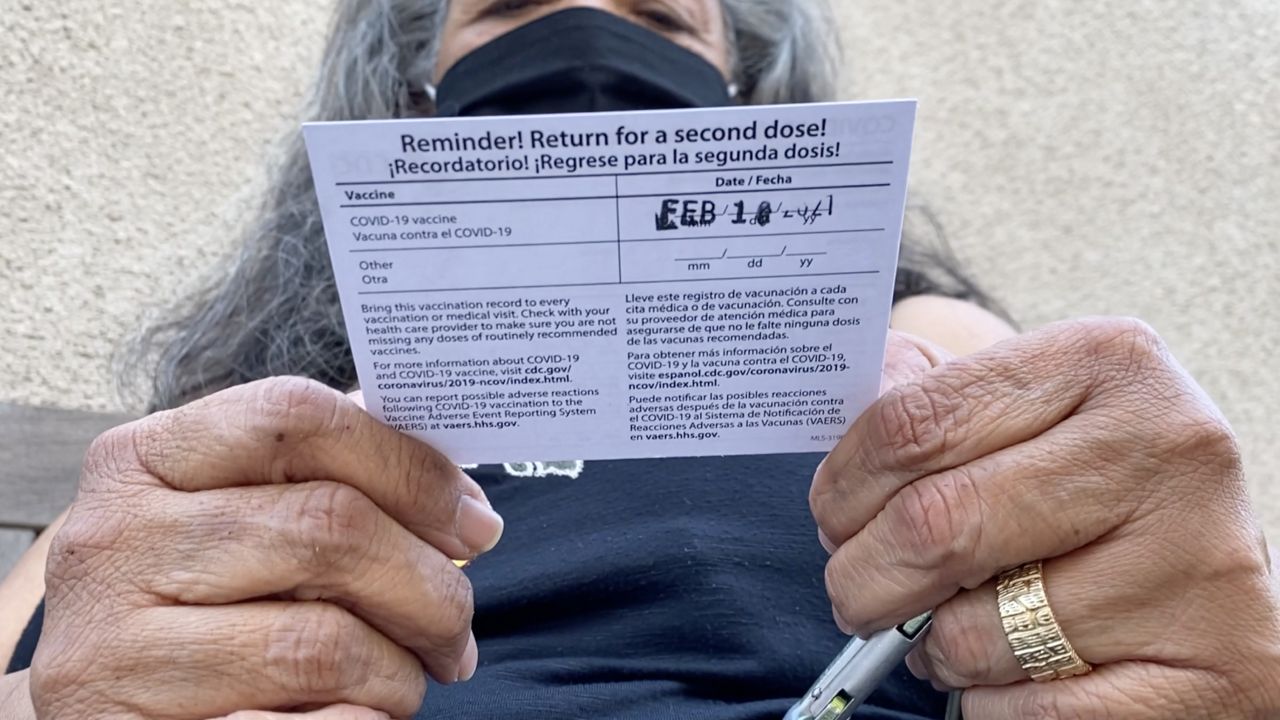 67-year-old Ceci Dominguez wishes that signing up for the vaccine was easier for seniors.

Seniors Ready for Vaccine Say Appointment System Is a Hassle

EAST LOS ANGELES — For Los Angeles County residents 65 and older, the journey to finally getting their first dose of the COVID-19 vaccine has been relentless.

Between the digital divide and technical difficulties on the county's vaccination appointment website, some are saying the registration system simply isn't senior-friendly.

Millennials and Gen-z’ers say it best, "post a pic or it didn’t happen."

Tuesday evening, 67-year-old Ceci Dominguez posted a picture on Facebook while getting her first dose of the Moderna vaccine, and it’s one of the few selfies she’s ever taken.

“I knew I needed to show people that this [getting vaccinated] is what we need to do. This is our hope,” Ceci said.

But a chance at hope didn’t come as easy as it may look in the photo.

On Monday when the county announced vaccination appointments would be available to residents 65 and older, Ceci immediately jumped at the chance to be first in line.

Seniors, like Ceci, were met with error messages for hours when trying to secure an appointment time slot.

“All appointments were taken. Every appointment I clicked on it kicked me out. Not available,” Ceci said.

She continually refreshed the webpage, praying an appointment would appear, while also being redirected over the phone for nearly two hours.

“After waiting a very long time no one ever came [to the phone line]. No-one returned the call. So again we’re dealing with a system that is not helpful to our seniors,” she said.

California Public Health released a statement saying the goal is to distribute as many vaccines as quickly as possible, and the system is designed to give every single vaccine dose.

Ceci knows at least 20 people who are fighting, survived, or who have died from COVID-19, and thinking of them has kept her determined to hold on.

Ceci was finally able to get through on the website to make an appointment and said, “At 4:45pm [Tuesday] I was able to click on a time slot that said 4:50pm. Five minutes from the time I was registering. And it opened, it just opened!”

Consider it luck, or divine timing, because Ceci lives just three minutes from the Dodger Stadium vaccination site where she booked the appointment.

After a tiresome day and a rollercoaster of emotions, she’s now fearful she may miss her second dose if the appointment system remains the same.

“I wish there would be an easier way to get the second dose. I have to go make an appointment as I did today. So that means several hours again trying to pinpoint the day that I need,” Ceci said.

As she held her first vaccination record in decades, she said it symbolizes the light at the end of a very dark tunnel.

“It saddens me that in America we are going through this. But this vaccine gives me hope. It allows me to return to work, and do what I need to do to move forward.”