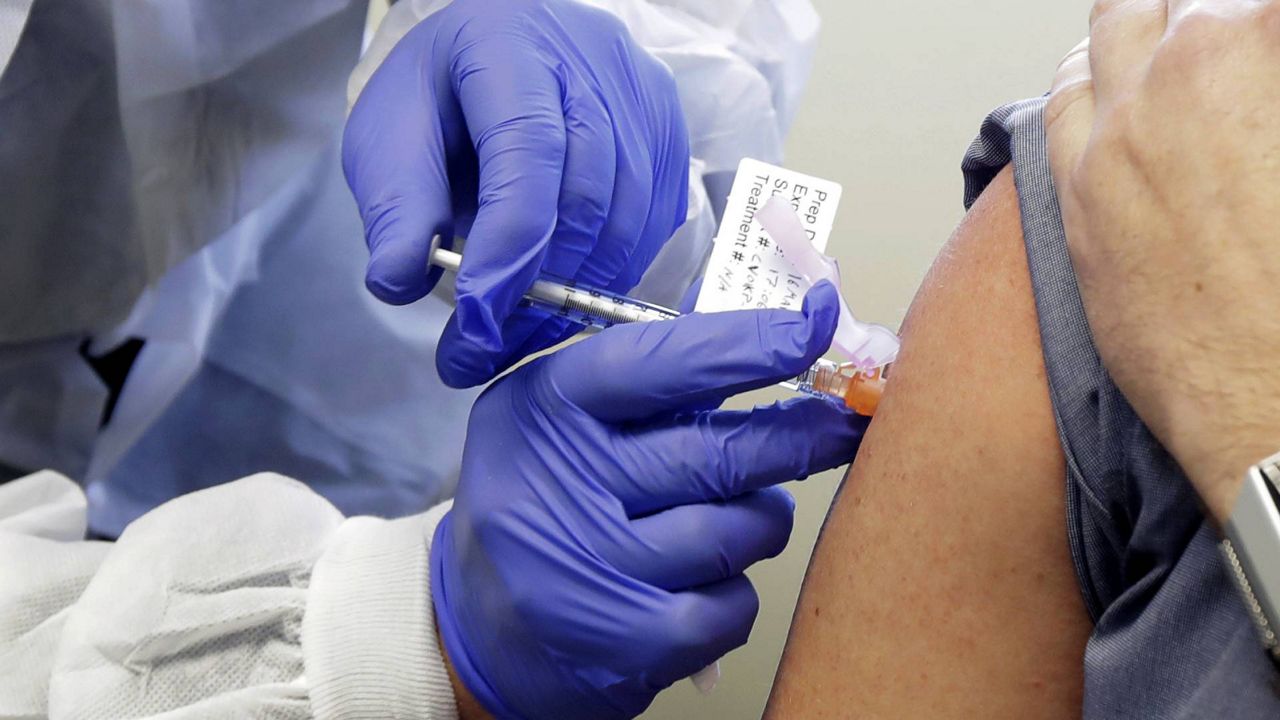 FILE - In this March 16, 2020 photo, Neal Browning receives a shot in the first-stage safety study of a potential vaccine for COVID-19 at the Kaiser Permanente Washington Health Research Institute in Seattle. (AP/Ted S. Warren)

COVID-19 Vaccine on Its Way, but Will Every Health Care Worker Want It?

ANAHEIM, Calif. — Pfizer has obtained Emergency Use Authorization from the FDA for its COVID-19 vaccine.

Nonie Belarmino has been a health care worker for 25 years and could be among the first to be eligible to receive the vaccine. He’s helped care for the elderly and now takes care of adults with special needs. Belarmino has worked mostly as what’s called a direct service professional – caring for those who can’t care for themselves.

"I give them the life that they deserve, that they can enjoy," he said.

It’s the type of care Belarmino said doesn’t allow for him to socially distanced from patients or clients, even during a pandemic.

"We have to be up close and personal, especially when giving them a bath, changing their diapers, and assisting on other activities," he said.

Belarmino packs extra personal protective equipment including face masks, a face shield, hand sanitizer, and other items in his work bag. He explained that even with extra precautions and protection, the rising case numbers have him worried.

Despite his fear of getting the virus, Belarmino added that he's still skeptical of getting vaccinated, as he has too many unanswered questions.

"What are the side effects of it?" said Belarmino. "Is it covered by insurance?"

He said he’s also had bad experiences with other vaccines, including the flu shot.

"I get more sick the first time," he said.

And since that first time, he’s opted out of the annual flu shot.

Karl Hess is a pharmacist and owns Galaxy Pharmacy in Anaheim. He could also be among some of the first groups to be eligible to get vaccinated against COVID-19.

"I’m certainly looking forward to being vaccinated myself," he said.

Hess added that vaccine is just one tool in the public health tool kit to combat this pandemic. Other tools, he explained, should continue to be used and practiced, such as wearing face coverings, hand washing, and social distancing.


Dr. Hess is also an associate professor at Chapman University, where he teaches on immunizations, travel health, and other topics. He explained that vaccines are only effective with participation.

"We need around 60-70% of the population, at a minimum, to be vaccinated in order for this virus to actually die out," said Hess.

Dr. Hess added that without what’s called "herd immunity," the virus can stick around.

"The more people that can be vaccinated against this, the better," he said.

Belarmino noted that he’s familiar with the statistics but plans to let other people go first when it comes to the vaccine.

“Wait till… till like 70% are already vaccinated," he said. "And uh, hopefully there’s some available for me."

Until then, the health care worker said he’ll continue to take extra precautions to protect his patients and himself. But he has no plans to get a vaccine.