"We are in the same place that we were last year — closed," said Patel, the co-owner of Dip Shabu Shabu, a restaurant in Artesia. "I was closed at the beginning of the year. Now I'm temporarily closed at the end of the year."

Patel is not the only restaurateur having to shut its doors — again — as the more transmissible omicron variant sweeps across the Southland.

In Los Alamitos, the Original Fish Co. placed a sign on their door earlier this week saying it had to close on Tuesday and Wednesday "due to COVID uncertainty, sanitizing, and testing." According to their website, the restaurant also plans to close on New Year's Day and the day after — usually one of the busiest times of the new year. The Original Fish Co. owner did not return a Spectrum News request for comment as of press time.

The Park's Finest in Echo Park has also temporarily closed. After feeding the front-liners for most of the year, the Filipino barbecue restaurant reopened their storefront three days a week in September, only to deal with unruly customer behavior, lack of workers and all of the other challenges from the global pandemic.

"We are tired, worn out and scared about the constant threat of exposure and extra burden to test, retest, isolate, accommodate schedule gaps, and provide explanation to staff and guests about our current circumstances," said Concordia on The Park's Finest's Instagram page. "So we are stopping to take a breather, regroup, and try again in 2022. We wish you all a safe and happy holiday season."

Concordia did not return a Spectrum News text message for further comment as of press time.

For many Southern California restaurateurs, 2021 has been filled with one calamity after another and feels like the movie "Groundhog Day," except that it's lasting the whole year.

The latest omicron surge and staffing shortages are another challenge restaurateurs face as they close out the year.

And in many ways, the variant popping up during the busiest time of the year is indicative of the industry's frustrating situation in 2021 as they all continue to grapple with the coronavirus pandemic and pandemic-related restrictions. 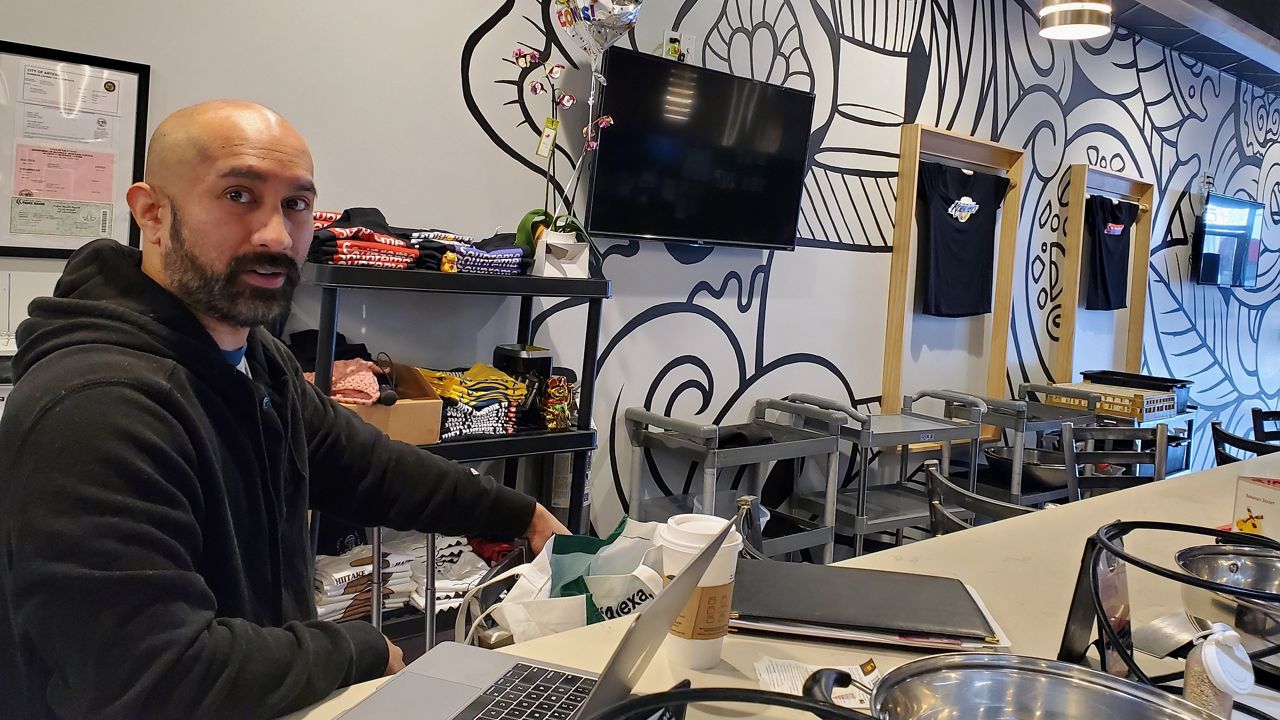 "We try to roll with the punches, but it doesn't stop," Patel said.

The year started with many restaurants and other retail places closed. In December 2020, Gov. Gavin Newsom, who was going by the state's now-defunct color-coded system that tracks COVID-19 cases, placed a statewide stay-at-home order due to rising infection rates.

Restaurants and indoor areas had to shutter their doors or limit customer capacity and furlough staff until they received the okay to reopen.

That didn't happen until the end of January, and even when restaurants were allowed to reopen, it had to be a patio and outdoor dining only.

As cases trended downward, indoor dining returned in March but with capacity restrictions depending on the county's COVID-19 risk level color.

As the year went on, Orange County placed fewer restrictions on restaurants. Meanwhile, their neighbor in Los Angeles placed stringent COVID-related mandates, including requiring proof of vaccination before dining indoors.

Justin McMahon, a vice president at JLL who specializes in retail leasing and restaurants, said 2021 had been a trying year for many restaurateurs across Southern California, especially in Los Angeles, where there were more COVID-related restrictions in place and the central business district was hammered due to fewer people coming into the offices.

Still, what 2021 showed, McMahon said, is that people want to go out and dine and spend money despite the pandemic.

"The main issues restaurants faced this year were not due to lack of demand," McMahon said. "The demand is there for the most part, unless they were overly dependent on the customers from the business district."

McMahon said many of his restaurant clients' main concerns were staffing, but add the possibility of infection, and their situation got worse.

"Staffing is a nightmare," McMahon added. "It was a nightmare before the pandemic, and there are a million reasons why, but now you get someone to test positive, then you have to take them out of their shift, find out who got exposed, and close contact. It's crazy."

But one thing that stood out for McMahon in 2021 was the resiliency of restaurant owners.

"Those that stuck it out thrived because they were figuring it out," he said. "Some restaurateurs dedicated to take-out, online ordering, made sure staff were healthy, and they enhanced cleaning and masking. They were doing the best they could to accommodate customers and straddling the line of all the different mandates."

McMahon is optimistic restaurateurs will do better in 2022.

"People are adjusting and learning how to live in this pandemic environment," he said. "In my opinion, you're going to see consumers come back out and resume normal activities. I think the worse of this is over."

For Patel, the owner of a shabu shabu restaurant, 2021 has grown increasingly difficult as the year went on despite receiving business grants and money from the government's paycheck protection program.

Not only has he dealt with LA's COVID-related business restrictions and labor shortage, but also inflation. The cost of meat and vegetable products has gone up "by 100%."

"We used to have a lunch and dinner menu with different price points," Patel said. "Now, we only have dinner prices. Next year, I will probably have to raise prices, and I hate it. I don't want to outprice my customers."

He also found during this time that a small number of customers were not as friendly as they were before.

"We've had customers that are mean since we've reopened," he said. "It's just like the situation with flight attendants. Fortunately, it hasn't gone to that [physical altercation] level but we've had one guy walk out and few others [complaining]."

When one of his staff members was notified of being in close contact with a friend who tested positive for COVID earlier this week, Patel shuttered the restaurant and had all of his staff take a test.

His team was okay, but he wanted to take precautions despite this time of year being the busiest for his restaurant.

"In a way, it's an oxymoron," he said. "It's a bad thing for our staff that relies on a paycheck, but it's also good because so many of them are burned out. We don't have a lot of staff. They are working really hard."

Patel hoped that customers understood why he had to close or cut hours temporarily this week.

He plans to reopen his restaurant with limited hours on New Year's weekend and go with the flow after that.

"I'm hoping they understand," Patel said. "It's tough times. We have to adjust."