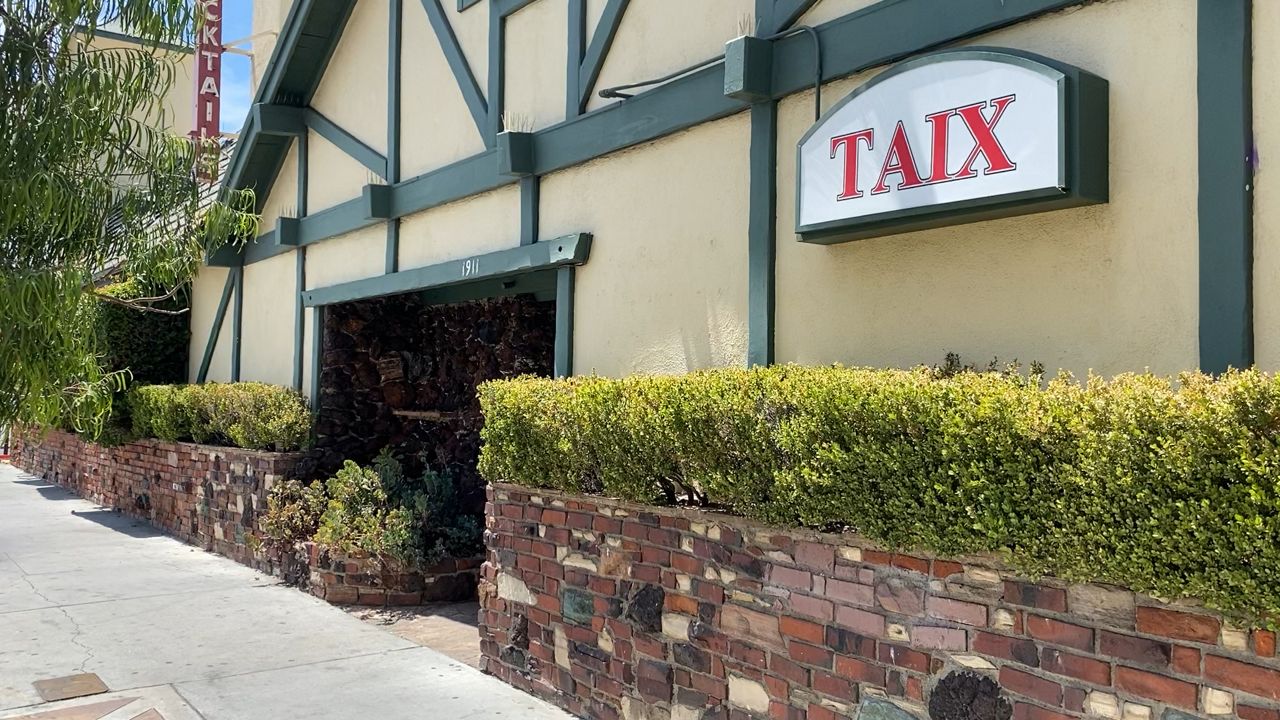 LOS ANGELES — On a recent Saturday evening at Taix French Restaurant, atmospheric chatter filled the winding darkened dining rooms. Lifelong Angeleno Don Steier was enjoying dinner with friends, tucked into a booth toward the back of the restaurant. The richly patterned carpets and mirrored walls felt decidedly retro and old-school, as was Steier's drink of choice, a Gibson — he's been enjoying the same cocktail at Taix for 40 years.

The restaurant is almost 100 years old but was first established at a downtown location.

"As a kid, I would go with my parents when I was 5, 6, 7 years old, and we would have dinner at long tables, and then it moved here in the '60s, and we automatically, out of nostalgia, come back periodically," Steier said.

In 1962, Taix moved to its current location on Sunset Boulevard in Echo Park. It's a distinct building with a faux French cottage exterior and green turrets, but the building is set to be demolished as part of a development plan. Apartments and a mixed-use space will replace the current structure, and a new smaller version of Taix will be built within the new building.

It's a change Steier regards as inevitable in an ever-changing city like Los Angeles.

"The neighborhood is going through a change, and this is part of the change. It's fine," he said.

Taix's owner, Mike Taix, who sold the property to the development company Holland Partner Group, will remain involved with the new restaurant. He agrees that change is necessary. In a statement to Spectrum News, he wrote:

"We look forward to the new space providing a continuation of our legacy services with a greatly more energy-efficient, size appropriate and fully functional site. Without this opportunity, we would surely close."

But not everyone is on board with the building being demolished.

Annie Sperling has been visiting Taix for more than 25 years. She lives 10 minutes away from the restaurant and bikes over for dinner regularly.

"It's almost like we're losing a family home for the neighbors here," Sperling said. "Taix is kind of the heart of this neighborhood, and it will be lost when they bulldoze this building."

Sperling is a member of Friends of Taix, a group that has pushed for the building to receive a historic designation from LA City Council. However, despite the group's concerted campaign, on June 2, the council voted unanimously on a proposal from Councilman Mitch O'Farrell that determined that while the business and site of Taix is historic, the physical building is not.

"In this case, it is my main objective to give the business a chance to survive," O'Farrell said during the meeting. "That simply is not going to happen with the current structure. The Façade doesn't merit preservation, and that's crystal clear."

Instead, O'Farrell proposed incorporating iconic items including the original bar top, a billboard and a cocktail sign into the new development. This has concerned preservationists across the city like Kim Cooper and Richard Schave, cultural historians who run Esotouric, an LA tour group. Schave is worried that other council members will begin to mimic O'Farrell and deem buildings historic, maintaining bits and pieces of them rather than the entire structures.

"It's of great concern to preservationists, and it should be of concern to Angelenos in general who care about the cultural legacy of Los Angeles. This nomination doesn't landmark the structure, which is the point of the ordinance." Schave believes a new precedent has been set. "Other council members will follow. They will be rewritten and create these bizarre statements of preservation which don't relate to buildings."

According to Cooper, it's the building, not the memorabilia, that people value.

"It's not enough to say you can just salvage a pile of garbage from a building and call it a landmark — it's not what people are attached to. I think the vast majority of people who love Taix have never seen the billboard … But they know how it feels to walk into that beautiful dining room and think about all the people they have spent time with there," she said, adding that long-standing buildings can't be recreated. "If you tear it down, you can't bring it back."

But back in the dining room, as he moved on from Gibsons to red wine and tucked into a plate of braised short ribs, Steier said he, for one, was looking forward to seeing the next iteration of Taix.