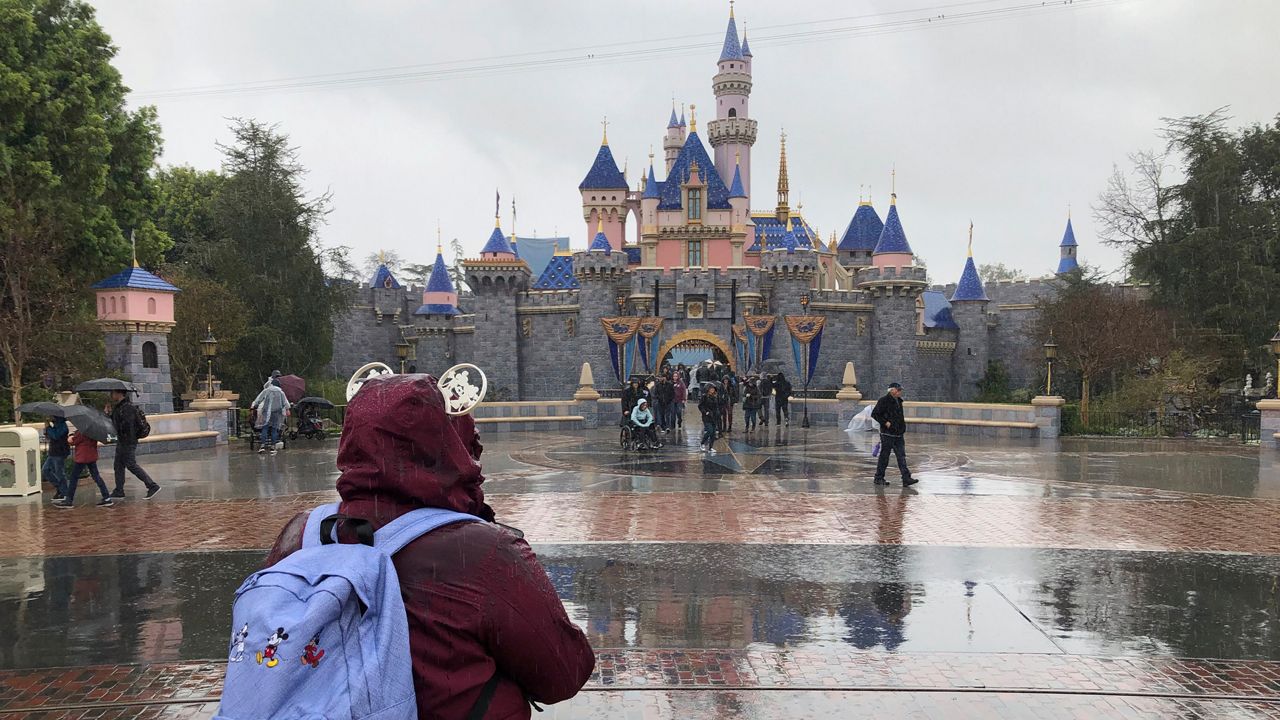 A visitor stands in the rain at Disneyland in Anaheim, Calif., Friday, March 13, 2020. (AP Photo/Amy Taxin)

ANAHEIM, Calif. — Over the past year, seeing the Tropicana Inn and Suites without any guests has been heartbreaking for owner Ernie Badalian.

He’s seen some slow days since taking over the hotel in 1959, but this is different.

“Not like this completely. There were some days where there was nobody here,” Badalian said.

A complete standstill was wreaked by the pandemic. The hotel is located across the street from Disneyland and before the pandemic, thousands of visitors would stay the night. It brought a smile to the face of 95-year-old Badalian, who saved hard-earned money and bought the hotel in his early 30s, when Disneyland was still new.

When the theme park shut down last March, Badalian says tourists stopped coming but not the bills.

“Somebody had to watch the office, watch the place,” he said. “We still had a lot of expenses. When you close the hotel, expenses stay with it.”

Badalian survived the Turkish-Armenian war but facing the pandemic is unlike anything he’s ever experienced. His family-run business falls in one of the hardest hit sectors in California’s economy: tourism and hospitality.

Economists say industries like construction and manufacturing have almost completely recovered to pre-pandemic levels, but restrictions on travel, food services, and attractions have crushed hospitality businesses like hotels.

Cities that rely on tourism also feel the brunt, according to Anaheim City spokesman Mike Lyster.

“We have seen a $114 million budget deficit,” Lyst said. “Now that’s out of part of our budget to serve the community that’s about $400 million.”

After Disneyland shut down, Anaheim lost 40% to 60% of its revenue. The city hasn’t been forced to lay off employees but is offering an early retirement to some workers. Lyst also says there is 9% unemployment rate across Anaheim, which is on par with the Great Recession.

But economic recovery could be on the way as California announced that Disneyland is allowed to open with 15% capacity on April 1.

“I’ve seen it myself in terms of all the precautions they have put in place to protect visitors and workers but now they have to begin a process of calling back worker that may have been furloughed and then getting all the rides ready to do,” he said. “That will take a little bit of time for as large an operation as Disney.”

Badalian says he can’t wait for tourism to pick up again. His hotel received over 300 reservations as soon as word spread about Disneyland reopening.