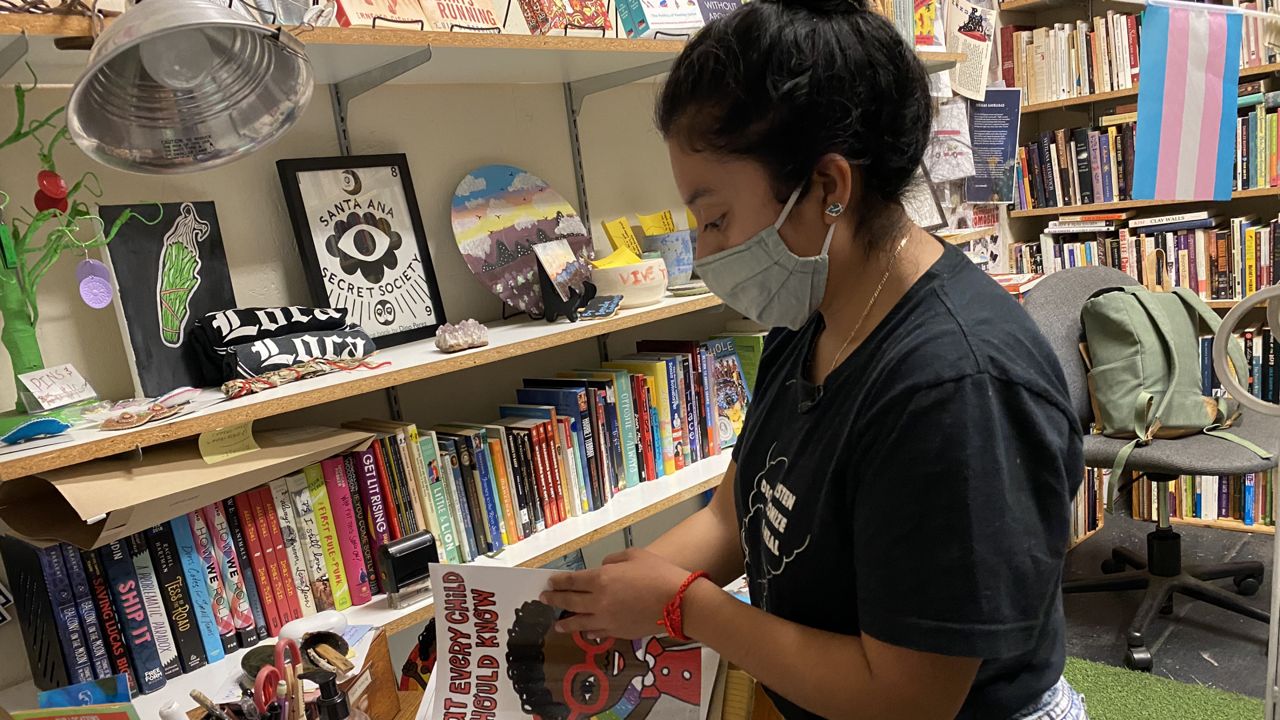 SANTA ANA, Calif. — Books used to scare Selena Pineda, but now she works in one.

“I could see there were a lot of books, but not a lot of books of people like me,” said Selena Pineda, born and raised in Santa Ana.

Pineda is the eldest daughter of an immigrant family. She said her fear of books stemmed from the fact that her first language was Spanish and she couldn’t find books that captured what it’s like to grow up in an immigrant community. Her fear didn’t go away until she stumbled upon the LibroMobile bookstore in Downtown Santa Ana.

“Literacy does matter. It shows that there are gente like us that are doing the work and you can also be part of that community,” said Pineda

‘Gente’ means people in Spanish and this bookstore is filled with stories written by people of color detailing their struggles and triumphs. It’s a reflection of the gente who call immigrant communities like Santa Ana home.

“People assume that people or underserved communities don’t read and that is so not true," said Chapman University professor and author Sarah Rafael Garcia. "I grew up reading and my parents didn’t have a high school education. Those stereotypes are just perpetuated, but nobody asks what the community actually wants."

Garcia said she opened her own bookstore after a longtime bookstore in Downtown Santa Ana closed.

The professor created the nonprofit LibroMobile in 2016. They offer free books in English and Spanish to children and teenagers, however Garcia said they would never turn an elder away. The goal is to promote literacy and put culturally relevant books into the hands of people who can’t access books. It is also her intention to create visibility and access for communities that have always been in Santa Ana.

In March of 2020, Garcia had left a convention in Texas and returned to Santa Ana with a van-load of books. She became worried because her self-sustaining bookstore started losing a lot of revenue when the state of California entered its first shut down phase.

Garcia closed her bookstore from the public, but she and her team started selling books online and held weekly Instagram TV sessions.

“I knew our savings was only good for six months. We had to pay rent, insurance, we had to pay my staff, but the next thing you know we’re making more off of Saturday sales than we’ve ever made as an open venue,” said Garcia.

Garcia said she hates filling out applications, but a few of team members started applying for grants. The first grant came from the city of Santa Ana. In late March, the U.S. Department of Housing and Urban Development Community Development Block Grant Program gave the City of Santa Ana an allocation from the first round of CDBG-CV funding to be used specifically for the prevention of, preparation for, and response to the Coronavirus. This allocation was authorized by the Coronavirus Aid, Relief, and Economic Security Act (CARES Act), Public Law 116-136, which was signed on March 27, 2020.

This new program provides up to $5,000 in the form of a grant on a first-come, first-serve basis, based on reimbursement of eligible business expenses, such as rent.

“Without that grant, we wouldn’t be speaking today because we had a savings that would get us through summer, but we had nothing to get us through the rest of the year,” said Garcia.

That $5000 grant motivated the team to apply for two more grants. Garcia said team of staff and volunteers, financial assistance, and the store’s online book sales from readers locally and nationally helped save LibroMobile.

“Knowing that there are people out there who really want the space to open and for people to triumph in this space really means a lot,” said Pineda.

Besides saving the bookstore, the grants also helped Pineda keep her part-time job and is inspiring her to not just read, but write.

One of Pineda’s dreams is to write a book of poems detailing her immigrant family’s life in America so it can someday sit on these shelves for someone just like her to read.

LibroMobile is celebrating its third anniversary on January 23, 2021 by hosting its annual Literary Arts Festival. The festival will be held virtually this year to keep everyone safe.

This year, LibroMobile is honoring David Lopez as the third recipient of the Modest Avila Award and keynote speaker at the anniversary.

For more information about purchasing a book to support LibroMobile or finding out about its Literary Arts Festival, please visit: https://www.libromobile.com.