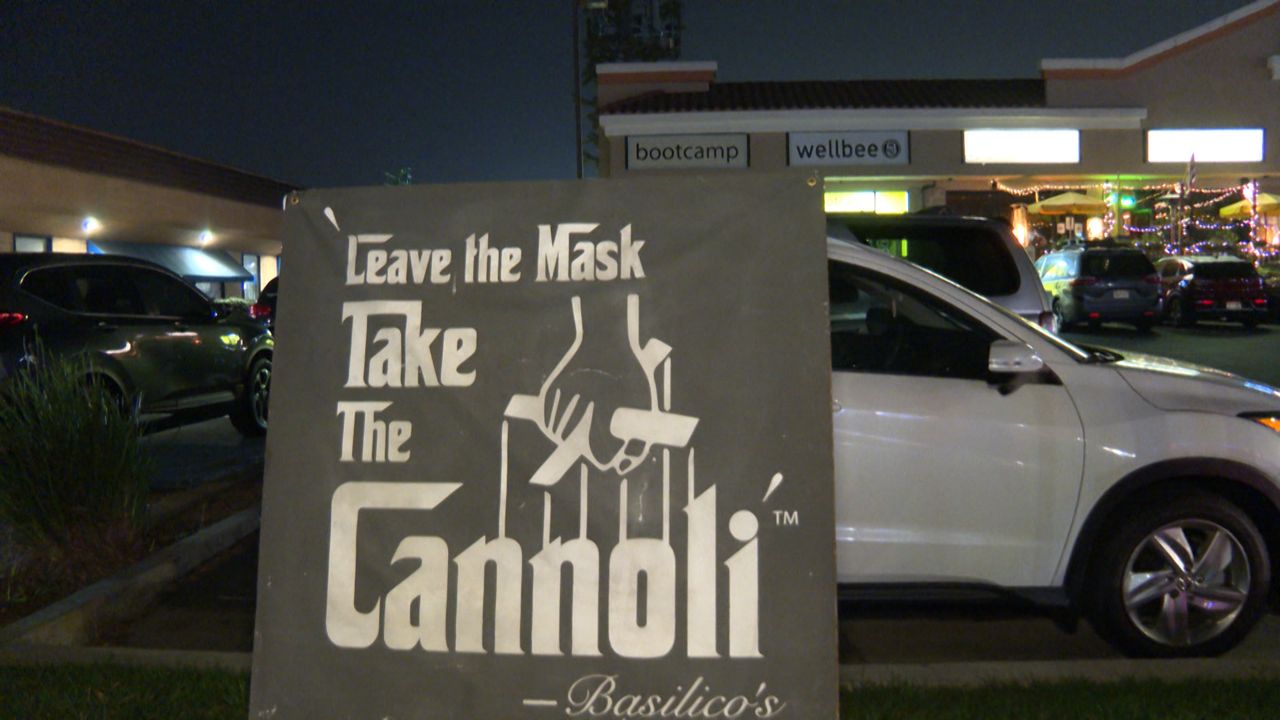 HUNTINGTON BEACH, Calif. — California’s COVID-19 industry guidelines require face covering at most businesses that have been allowed to reopen. Restaurants are no exception.


However, customers and employees of Basilico’s Pasta e Vino do not wear face coverings. The Huntington Beach restaurant said nothing has changed about how they do business during the pandemic – including a no-mask policy.

Miller has worked at Basilico’s Pasta e Vino since 2017. Since mid-March, when the state first shut down non-essential businesses, Basilico’s has stayed open.

All along, the restaurant has stuck to their stance on masks. They are not allowed at Basilico’s.

A red circle with a line drawn through it on top of a black and white graphic of a face with a mask on it is on display in the windows of the restaurant. The dining spot even remind customers of its no-mask policy with a play on a famous line from the movie The Godfather.

The line from the movie is: “Leave the gun, take the cannoli.”

Basilico’s, however, did change one of the words to express its mask motto: “Leave the mask, take the cannoli.”

The restaurant was not shy about spreading the word about their no-mask policy. They recently put up a giant billboard in Los Angeles near the Beverly Center that read: “Leave the mask, take the cannoli.”

“The billboard is really an ‘F you’ to the people who want to stop us because there’s nothing they can do,” said Miller.

The billboard just came down this week.

Tony Roman, the restaurant owner, in an email said:

“I posted the billboard to stick it to the haters, most of which come from Los Angeles. They seem to enjoy being miserable under lock down, so I thought since it's near Hollywood, our take on a line borrowed from the greatest movie of all time, would make our point perfectly, and maybe entertain them a little too!”

Miller said the restaurant’s no-mask policy is based on two things: “It’s just logic and freedom. And we like to express those things as much as we can.”

It is even expressed in places that only the employees would see, including in the kitchen.

Miller and Roman said liberty is the reason not once has the restaurant shut down during the pandemic.

“If you don’t feel safe to come out here then don’t, but if you do, we’re more than welcome to have you. We’ve got strong immunity; we hope you have the same,” said Miller.

Dave Champagne decided to come in for the first time in June. He said he called up the Basilico’s in search of a spot to meet up with a friend.

Champagne now eats at Basilico’s a couple times a week. He also provides impromptu entertainment for other diners. He does magic with playing card.

Champagne claims no matter where he is he is always without a mask.

Doug Wooding has been eating at Basilico’s for years, including at its original location in Huntington Beach that opened in 1999. He is now a regular at its current location on Brookhurst Street. The restaurant relocated in 2017.

“Food’s awesome. It’s why I keep coming back,” said Wooding.

Wooding also said he keeps coming back because he has tried eating at places that require masks.

“If you got to go to the bathroom, you have to put it back on. Mask on. Mask off. It makes no sense whatsoever. It’s annoying. I haven’t changed my lifestyle not one bit, and I won’t,” he said.

According to Wooding, mask requirements infringe on his freedom.

“Despite OC Environmental Health providing education to the food facility on several occasions, it remains out of compliance with the State’s requirements in the Health Order and with the dine-in guidance. The matter has been referred to the State’s Task Force for enforcement.”

The restaurant is currently facing hearings about its liquor license after the state Department of Alcohol Beverage Control filed an action against Basilico’s in July claiming it is a disorderly premise.

Miller confirms the no-mask policy has had plenty of criticism.

“People are just crazy, giving us death threats, saying they’re going to burn us down. We hope you die,” he said.

In his email, Roman wrote:

“We are receiving death threats from people threatening to put a bullet in the back of my head. And others wanting to see me with a feeding tube. Others threatening to burn our restaurant down. Some even threatening to spread COVID inside the restaurant. Crazy times, but we are fighting the good fight in defense of American Freedom and Liberty with a smile on our faces!”

One of the criticisms of the no-mask policy at Basilico’s was posted to TikTok by actress @SammiHanratty. Basilico’s posted her criticism to its own Instagram account @basilicoshb.

Miller said the restaurant chooses to respond to criticism the only way they know how: “It’s met with laughter because it’s all so [expletive] silly.”

The owner said another billboard could be coming, but the no-mask message remains on display outside the restaurant. The message: “Leave the Mask, Take the Cannoli.”

Lawyers claiming to represent Paramount Pictures Corporation recently sent Basilico’s a cease and desist letter saying the restaurant is using protected intellectual property linked to The Godfather movies without permission. The lawyers gave the restaurant until November 6 to respond.

The restaurant said it does plan to reply to Paramount, but indicated it will continue to use the Godfather inspired elements. The restaurant sells t-shirts with the “Leave the mask, take the cannoli” line on it.

The restaurant said it donates the profits to charities for veterans.