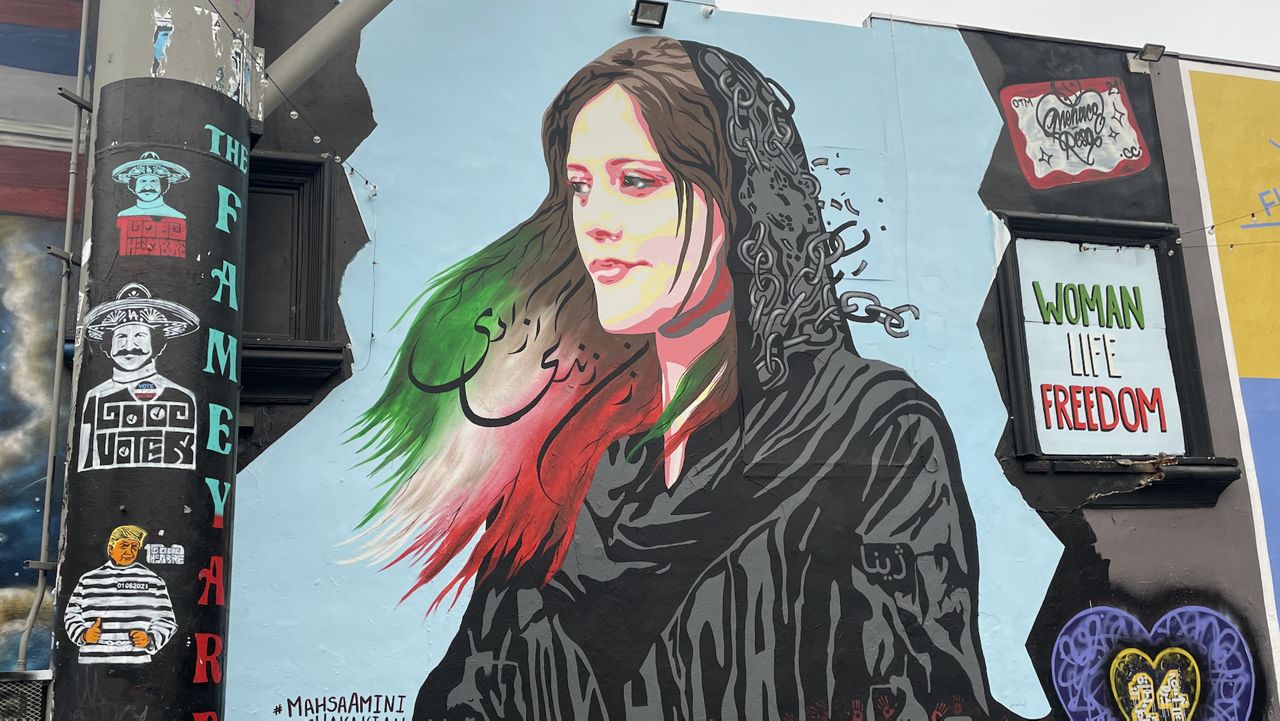 The back wall of a shoe store on Melrose Avenue is covered with a painting of Mahsa Amini who is dressed in black, and the colors of the Iranian flag are in her hair with the words woman life freedom to her left. (Spectrum News/Anna Albaryan)

The artists behind a new Mahsa Amini mural on Melrose Avenue

LOS ANGELES — For artist and muralist Cloe Hakakian, this piece is personal. The Iranian American artist, who was born and raised in Los Angeles, has spent the last few weeks agonizing over the crisis brewing in Iran, following the death of Mahsa Amini.

“It’s hard to sit back from a different country and feel like there’s nothing we can do to help,” she said.

That’s what led Hakakian to collaborate with another Los Angeles-based muralist, Todd Goodman.

Goodman, who has been painting murals around Los Angeles, particularly in the westside, said he is no stranger to politically motivated pieces that convey a powerful message. In the past, he’s painted about the Israeli and Palestinian conflict and most recently done work surrounding the invasion of Ukraine.

When he designed this piece, he wanted an Iranian artist to join him in bringing it to life and sought Cloe Hakakian’s help.

Hakakian rarely does political pieces, she said, but she also insists this project goes beyond politics.

“This isn’t even a political thing at this point. This is about basic human rights, and I couldn’t just do nothing. I just couldn’t,” she said.

For her fellow muralist, Goodman, the fight for women’s rights has become more personal in recent months. Goodman will soon become a father to a little girl, he noted.

And it’s not only the fight for women’s rights in Iran he’s rallying behind, but also the fight for women here in the United States to have a choice, following the Supreme Court’s decision earlier this year to overturn Roe v. Wade, he said.

“My motivations are very personal in creating this piece for my soon-to-be daughter as she enters the world. Everything that’s going on in the United States with politics and women’s rights and personal choice — the same thing applies everywhere in the world,” Goodman said.

As the two artists work, they’re greeted by dozens of visitors who have either stumbled onto the mural as they walked through the neighborhood or found the location through social media.

One by one, they come up to the artists and thank them for immortalizing Mahsa Amini, who has become a symbol in the fight for women’s rights and freedom in Iran.