LOS ANGELES — It's fitting that a pool painted by the legendary artist David Hockney is at the center of one of LA's new art hot spots. The colorful swirls of blue that decorate the Hollywood Roosevelt Hotel's Tropicana Pool are at the center of this year's Felix Art Fair, where dozens of galleries are displaying contemporary artists in poolside cabanas.

"The pandemic has been limiting travel and exposure to art for so long, so we're really excited about this year," said Moran Moran gallery owner and Felix co-founder Mills Moran. 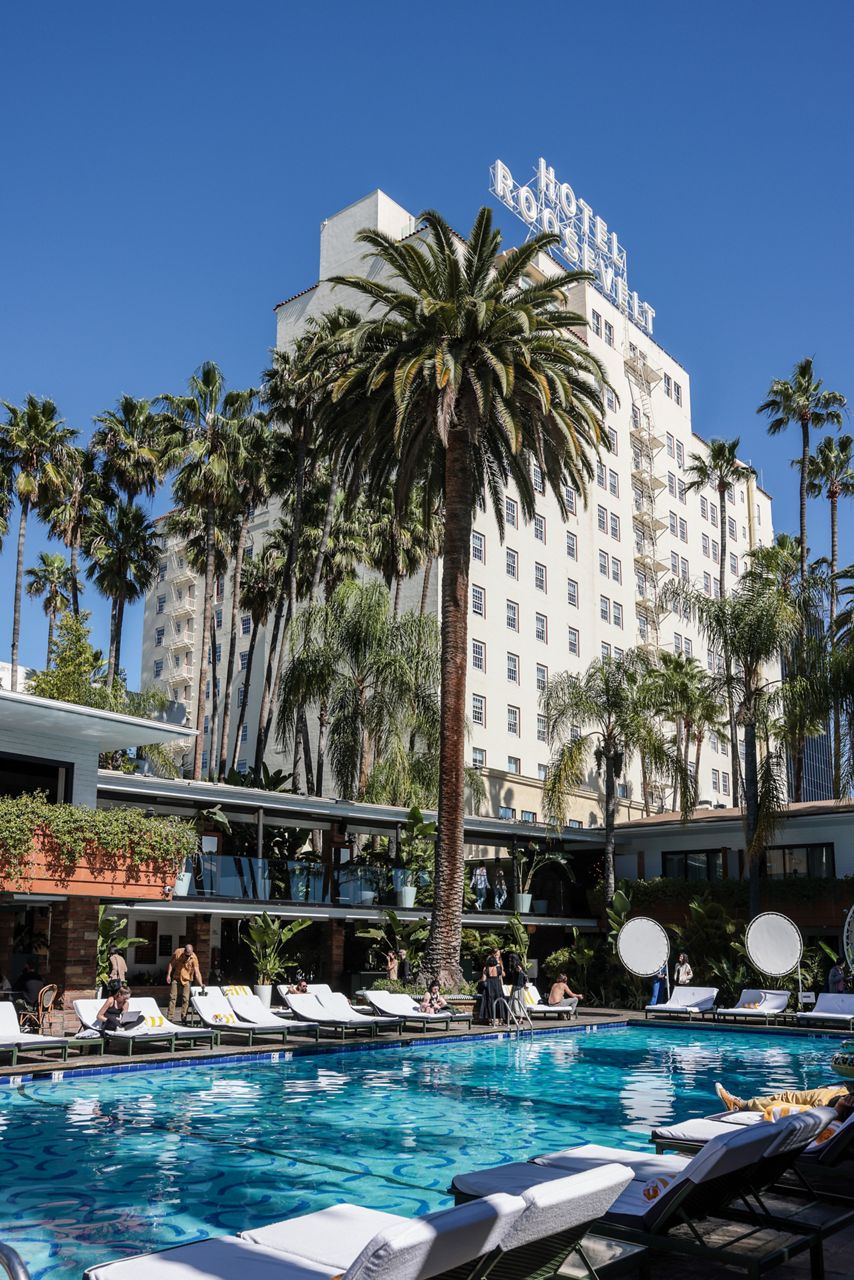 This weekend's event, featuring 60 galleries and hundreds of artists from around the world, is similar to the inaugural Felix Art Fair in 2019, which included works from 40 international galleries. Last summer, a scaled-back fair included only LA exhibitors due to the pandemic and used only the hotel's cabanas to show the artists' work. This year's fair returns some exhibitors to the tower galleries on the Hollywood Roosevelt's upper floors, where larger pieces and sculptures have more space. 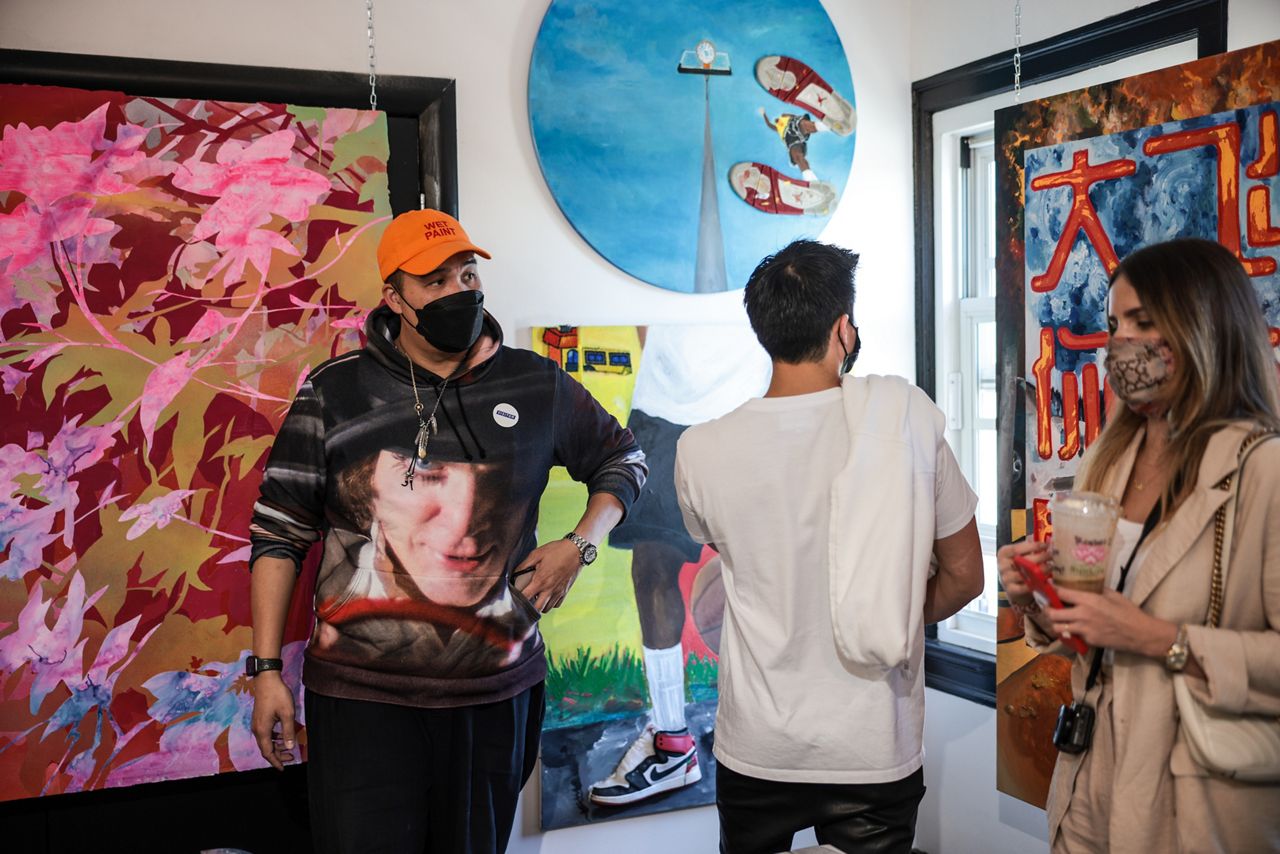 The Felix art fair is one of several art events taking place in LA this weekend, hoping to capitalize on the more exclusive Frieze LA fair, which also began in 2019. Twenty of the exhibiting galleries are new to the Felix this year, including the New York-based Broadway gallery showing LA-based assemblage artist Devin Troy Strother and Misako & Rosen, a Tokyo-based gallery showing LA painter Nathan Hylden.

"We generally prefer to participate in what I call the fun fairs — fairs that prioritize the cultural side of the art business and place the emphasis on looking at art," said Jeffrey Rosen of Misako & Rosen. "A hotel is not necessarily the best place to look at art, but the energy and spirit of this fair is in line with our position, which is less rigid than the Frieze, for example."

Misako & Rosen used its cabana to display a large format painting on one indoor wall and a polyptych of four related images on another, with a sixth piece hanging outdoors on the patio. 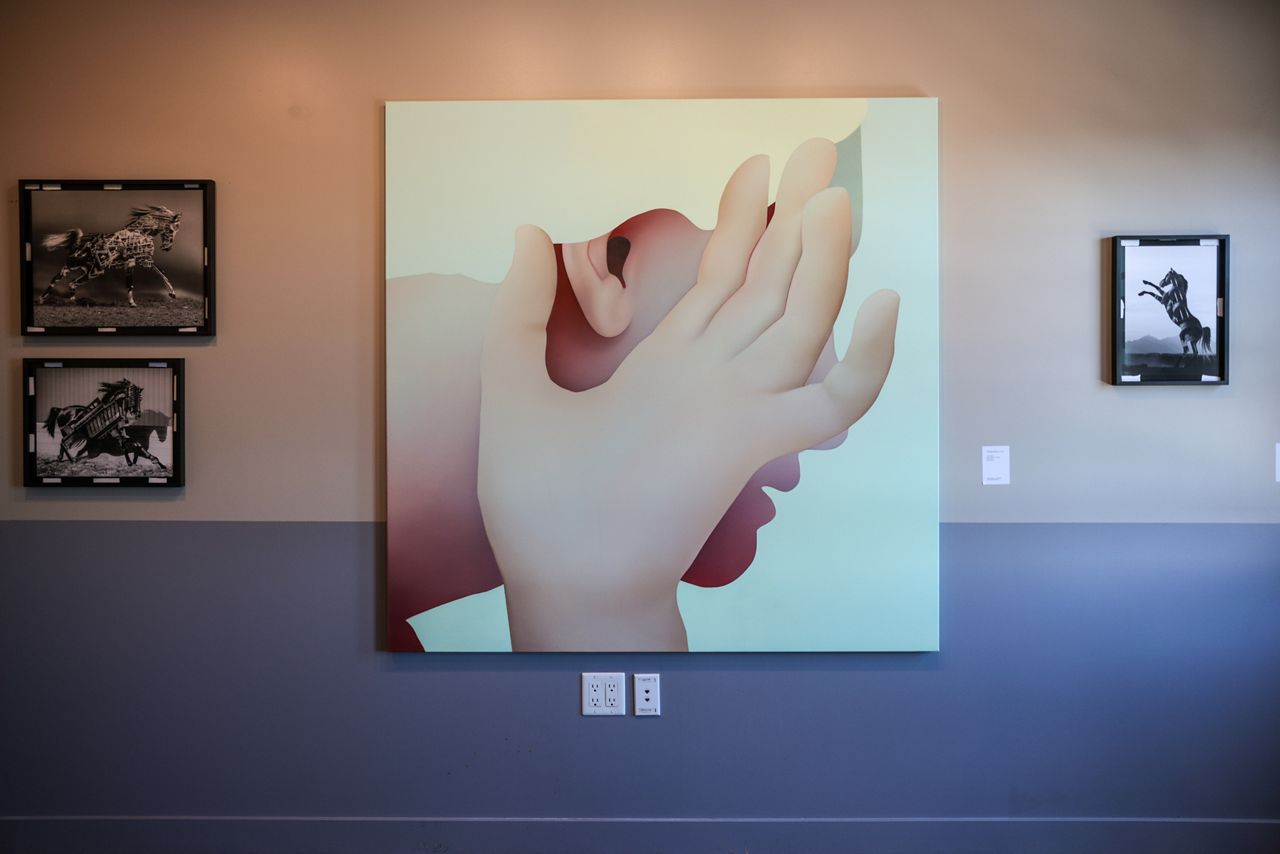 While some galleries used the walls of their rooms as traditional display spaces, others took a less conventional approach, hanging paintings in the bathroom or situating sculptures in the shower or outdoors on the cabana patio. New York-based Harkawik gallery hung a painting of a toilet paper roll next to the bathroom entrance.

A newish LA gallery called One Trick Pony was offering manicure-pedicures on its patio in addition to showing a mix of artists working in various formats. Pieces include a limited-edition series of Amy Winehouse tribute sweatshirts and a diorama version of an Eazy-E album cover.

"The Felix is one of the best fairs in America," said One Trick Pony owner and first-time Felix participant Arty Nelson. "This is the fair where you go and there's just the new surprise. You come to a fair like this, and you're going to walk into a room and see some crazy thing you've never seen before. To me, that's the excitement. It's sort of a treasure-finding process." 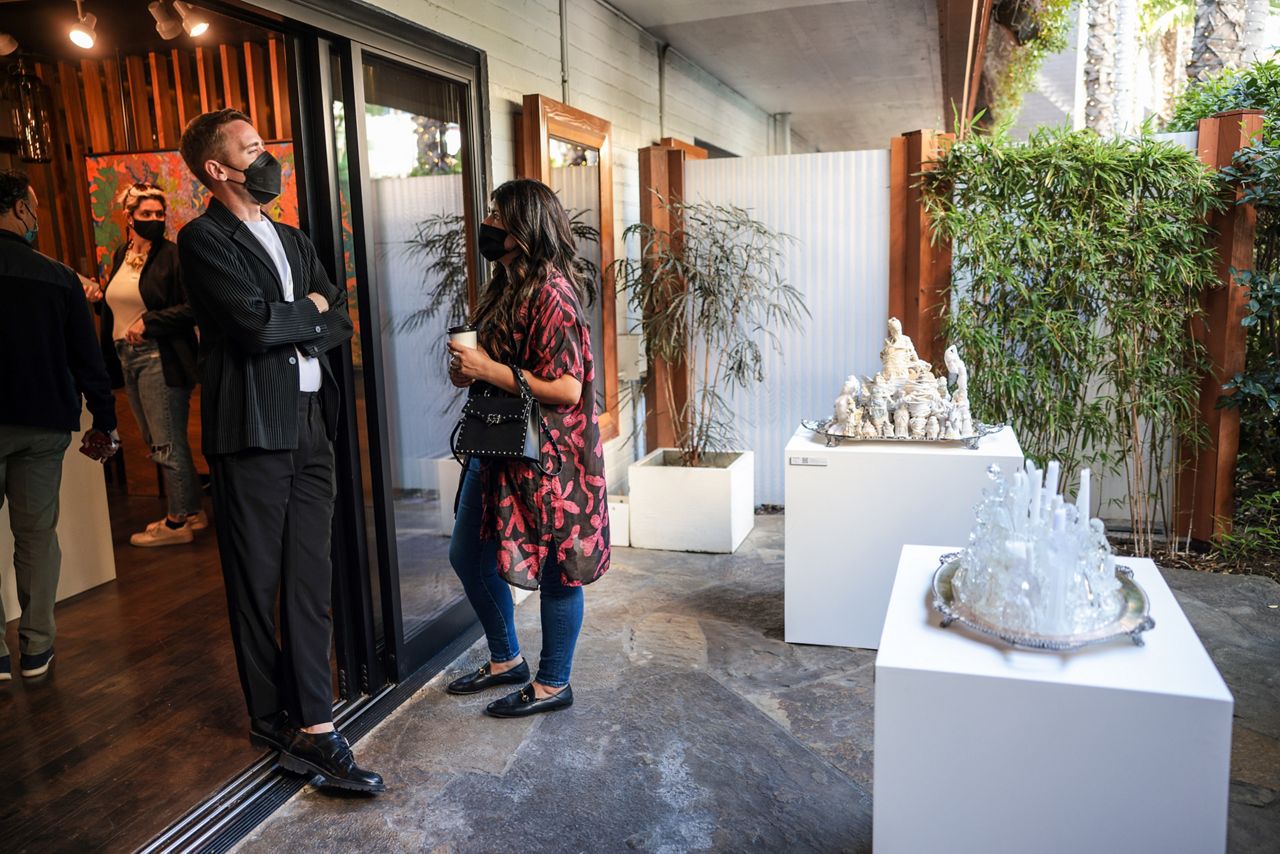 It's a diverse field, represented at the Felix fair with hundreds of pieces from dozens of artists — some of whom had shows dedicated exclusively to their work and others that shared the space with a group. Representing a mix of high-end galleries and younger startups, the majority of exhibitors are returning participants, including Tanya Leighton (based in Berlin) and Nicodim Gallery (with locations in Bucharest, New York City and LA).

"New York has had a stranglehold on the art world for a long time, but LA is really becoming a center for the arts community," Moran said, noting that several New York galleries have expanded with new spaces in LA to capitalize on Southern California's art-buying audience in a place where many of their artists are also living. 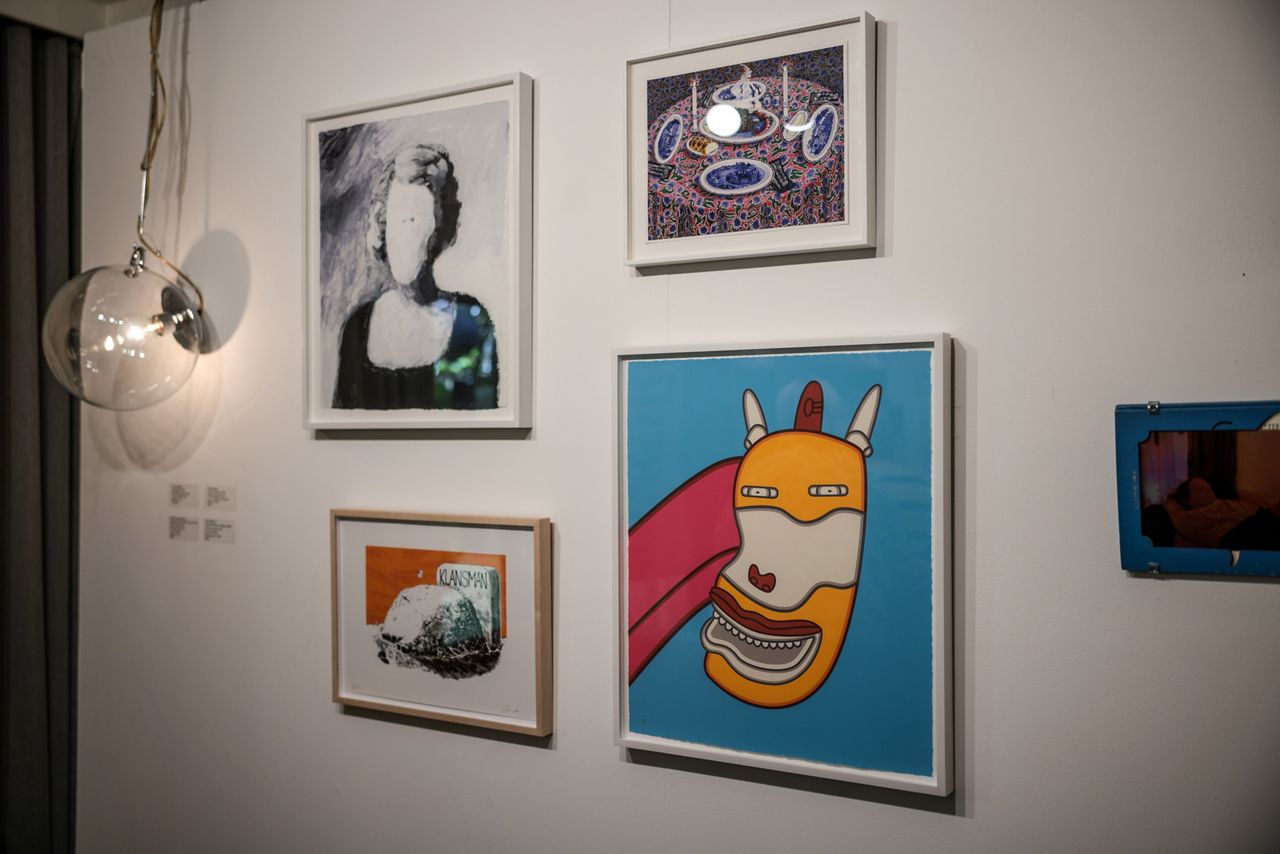 Just this week, David Zwirner gallery, which represents Diane Arbus, Barbara Kruger and Raymond Pettibon, among other big names, announced it will add an LA gallery to a portfolio of spaces that includes New York, Paris and London. New York's Sean Kelly Gallery also will open a new LA space this spring.

The Felix LA Art Fair opens to the public Friday and runs through Sunday, from 11 a.m. to 5 p.m. each day. Single-day passes cost $45; a run-of-show pass for all three days is $75.