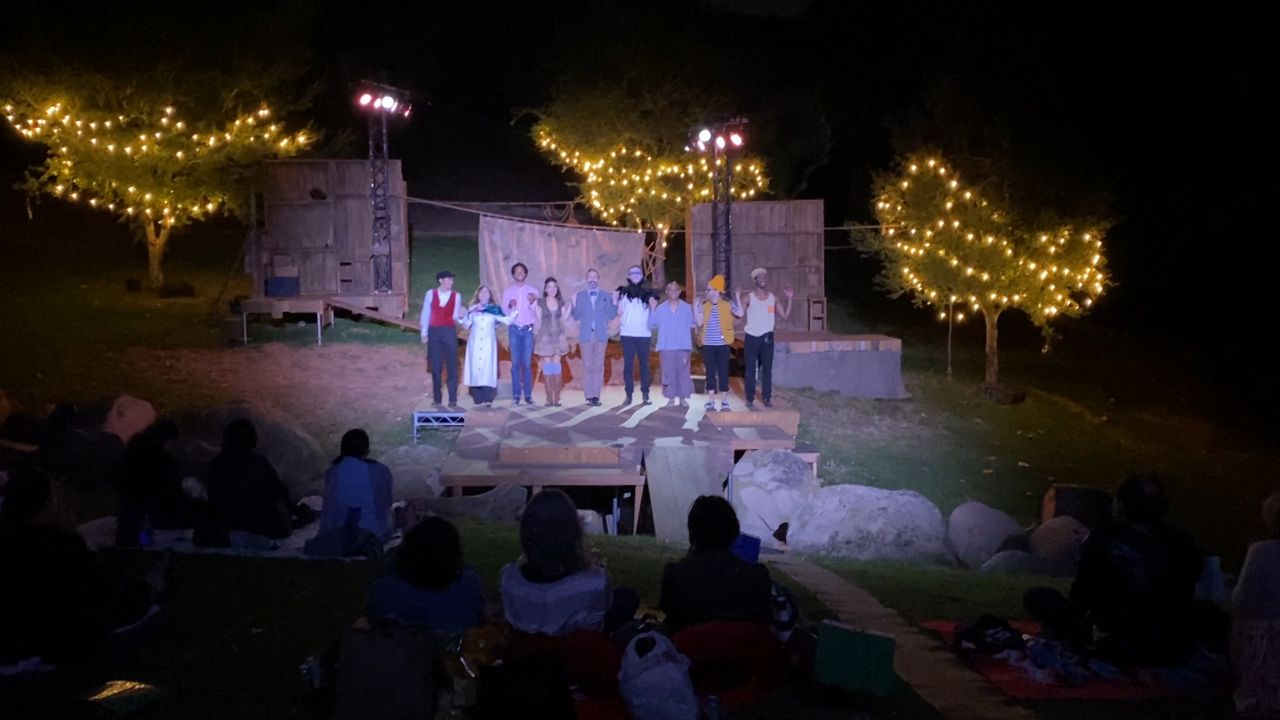 LOS ANGELES —  The sun was setting over Griffith Park as actor Xavi Moreno prepared for a Thursday evening production of "The Tempest." Moreno has been a member of the Independent Shakespeare Company for 11 years. Each year they host the annual free Griffith Park Shakespeare Festival near the old Griffith Park Zoo but last year’s production was virtual due to COVID.

Moreno plays Trinculo and Gonzalo and said he was thrilled to be back performing with his castmates. “Not being able to perform last year was a blow,”  Moreno said.

But this season of Shakespeare in the park hasn’t been all smooth sailing.

Rehearsals began when concerns about the delta variant first started picking up, but they pushed ahead. Then, another challenge, the stage they normally use in Griffith Park was under construction, so the production team, crew and cast members worked together to develop new sets. They’re compact with small backstage areas but Moreno says, adapting to the environment is part of the fun. The audience sees much more of the production, but he likes it that way. “They get to see sound check, usually the theater doors are closed for, sometimes people are surprised by that but I think it’s one of the beautiful, unique things about this," Moreno said.

Typically, thousands of people can show up for any of the productions, but this year attendees have had to book in advance and reserve a socially distanced spot on the grass. The change in location meant they couldn’t accommodate as many audience members, and it also left their sets open to the elements each night, and open to vandals.

One morning, the crew arrived to find the sets had been damaged, causing over $5,000 in repairs. Moreno said it was upsetting, “to feel like someone tried to disrupt and block that gift that we give to the city of Los Angeles.”

Thanks to donations and many people jumping in to help repair the sets, the damage didn’t halt production. Carene Mekertichyan, who plays Miranda, and is the artistic associate for social justice with the company says seeing everyone come together to bring the play back to life was inspiring. "A lot of people in our community came the next day early in the morning and put everything back...it was really a beautiful and special show that day," Mekertichyan said.

And just as community members and theater lovers donated to help the company fix their sets, the company was supporting Los Angeles. As the associate for social justice, Mekertichyan coordinates the efforts. “One of the great things we are able to do now being back in person is civic engagement," Mekertichyan said.

All summer they’ve been collecting money for the group SELAH, a neighborhood homeless coalition. “That’s another great thing about being back in person. We can be connected to everyone in our community and serve our community,” Mekertichyan added.

Audience members were just as excited to be back. Julianne Just, who has been attending the festival since 2013, was watching the show and sharing a picnic with some friends. “It’s great to be back," Just said. "Last year a lot of us were home and didn’t do so much. They’ve set it up in a way that feels really safe and I’m excited to see some Shakespeare and be with people."

As darkness fell over the park and fairy lights lit up the trees surrounding the stage, Moreno reflected on how much this season of Shakespeare in the park has meant to him. “I was really depressed last year," Moreno said. "I was sad to not be able to perform, to not be able to be on stage. When we heard we would be able to do something…it’s so much joy.”