Shyama Golden is the 2021 Featured Artist at the Hotel Figueroa in downtown L.A. (Photo courtesy of ShyamaGolden.com)

LOS ANGELES — When Hotel Figueroa first opened in 1926, horse-drawn vehicles had just been banned during rush hour traffic. Movies were still silent. And women who dared to travel without a male chaperone were prohibited from checking into most hotels.

Downtown L.A. was a far different place from its present, fast-paced swirl, but Hotel Figueroa was a pioneer. Funded by women for women traveling on their own, it has a long history of promoting the fair sex – a trend it is continuing this weekend when Shyama Golden will become the hotel’s 2021 featured artist.

Walk into the building’s Spanish Colonial Revival entrance, through its ornate lobby and on toward a long hallway known as the artist’s alley, you’ll see Golden’s work in all its color-saturated, large-format, naturalistic, surrealist glory. 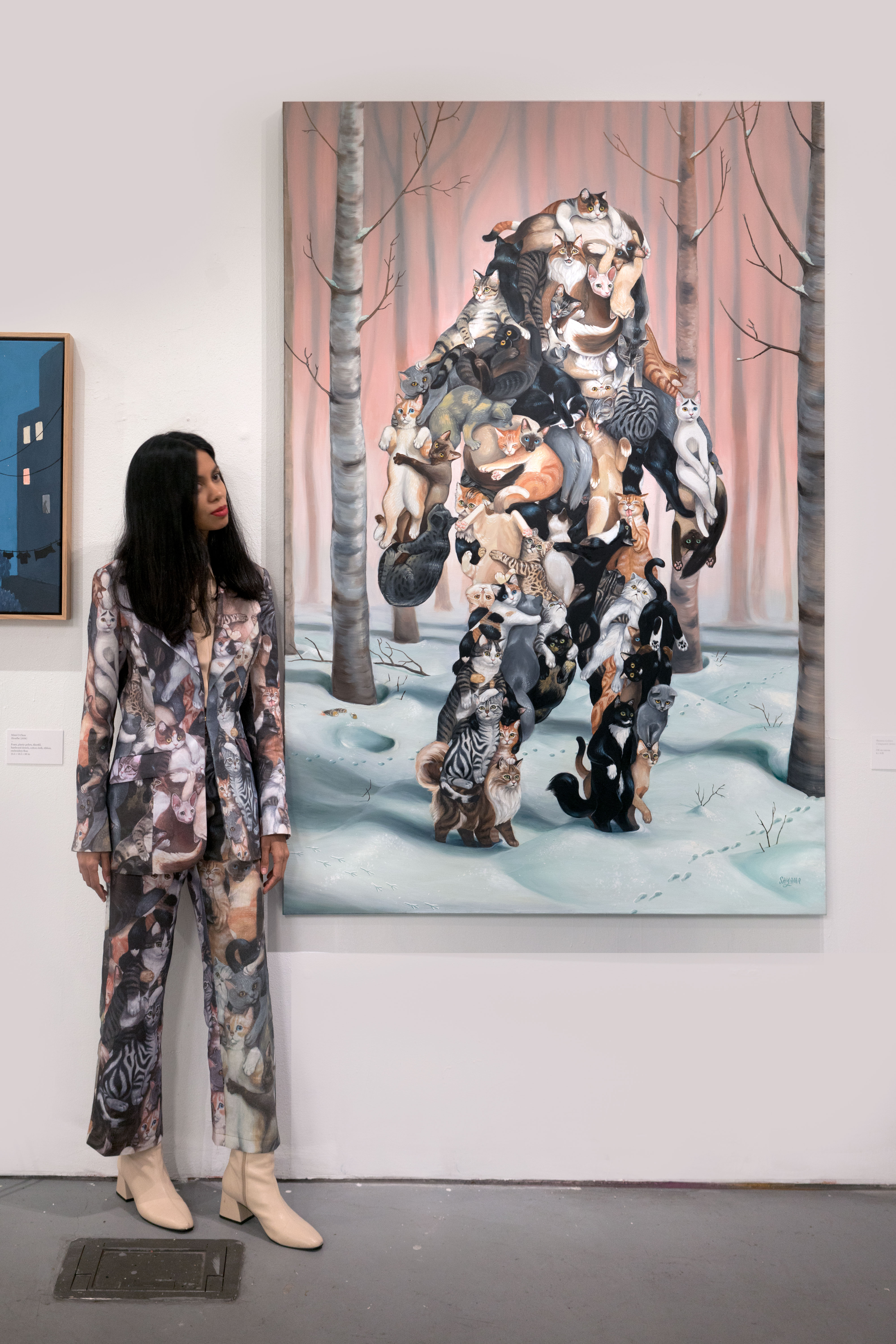 Among the pieces is a platypus riding a horse and a “catsquatch,” so called because it’s constructed entirely from furry felines who, as Golden tells it, ran away from home and climbed on top of each other to create this larger creature.

“There’s a few themes,” said Golden, an L.A. transplant by way of Houston and New York City, who imbues her work with greenery to explore issues of femininity and gender expectations. 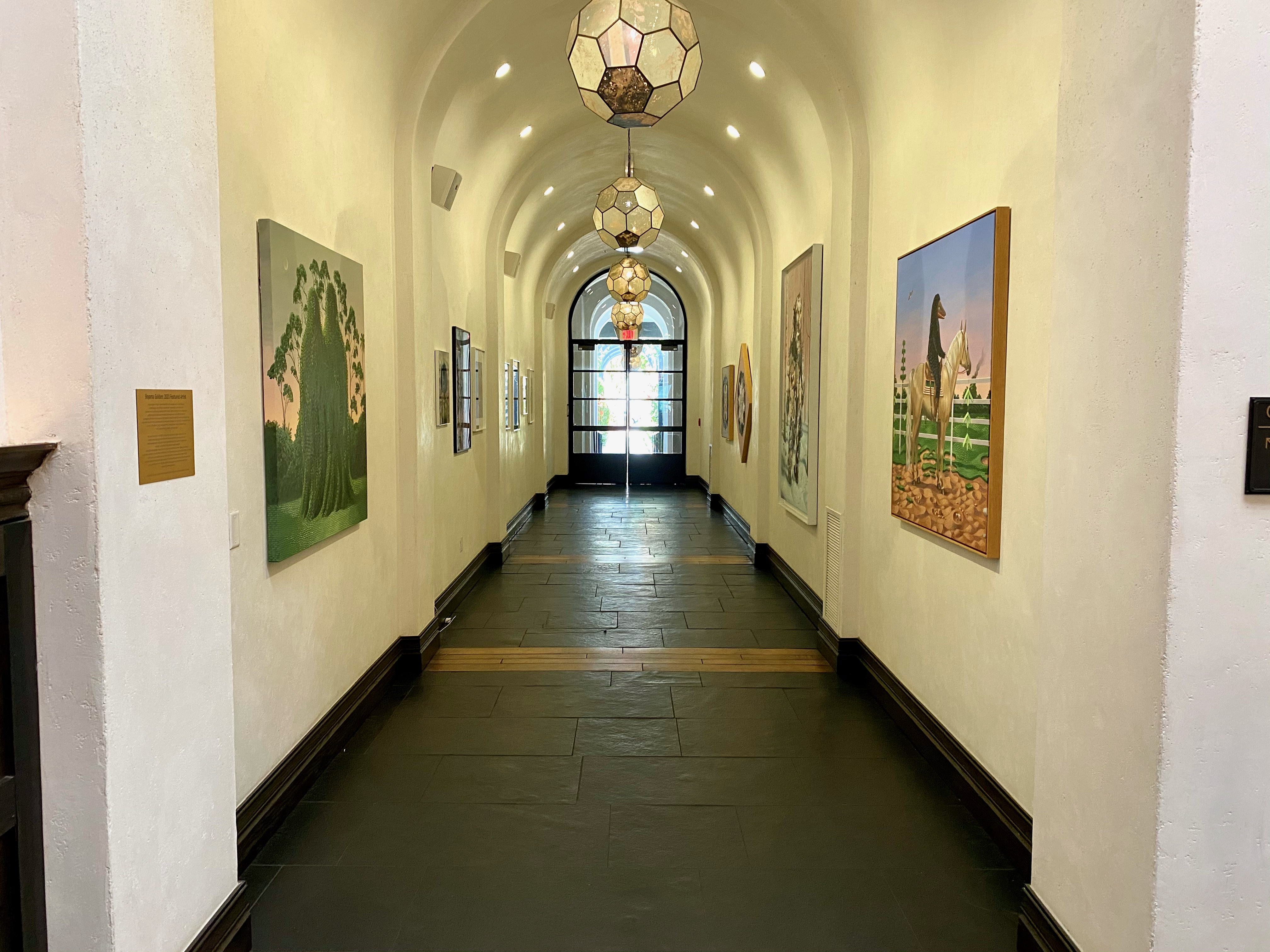 A colorful patterned piece that, to the casual observer, looks like the branches of a mango tree is populated with women in the buff “eating chips or on the computer or doing the things we do when we're alone and not worried what anyone thinks,” said Golden. She adds that the piece is meant to explore the differences in identity when you’re by yourself, compared with how you present yourself to the world.

Other pieces are a reaction to COVID.

“There’s a whole section that's just pieces of how I have been dealing with the past year and finding a way to sort of heal from all of the really horrible things that we were faced with and how to move forward from that,” she said. 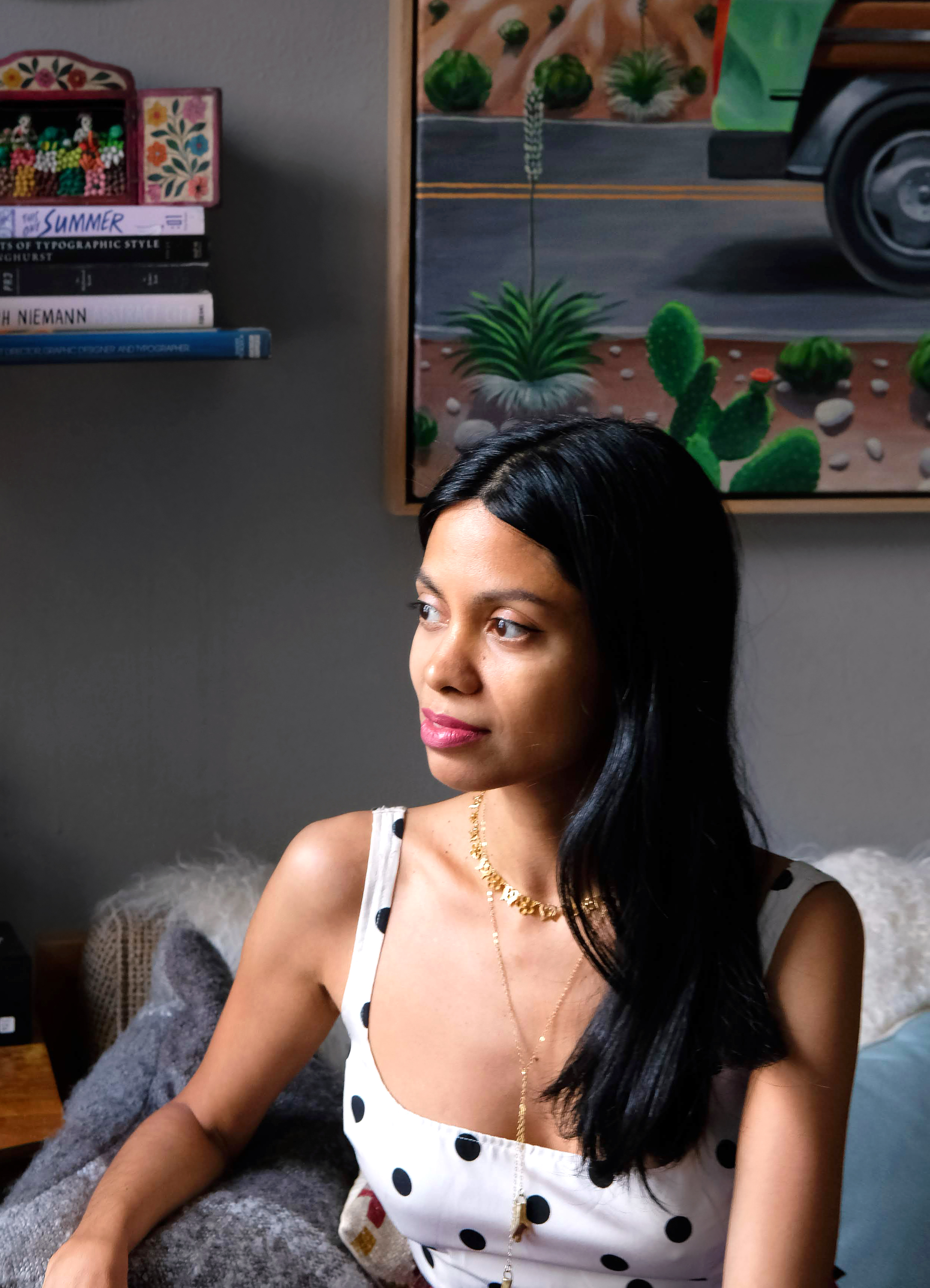 Golden isn’t the first female artist to be featured in the hotel’s artist alley, but her residency will last longer than most. Hotel Figueroa started a quarterly featured artist program in 2018, shortly after the building had undergone a massive restoration.

For 2021, the hotel selected Golden as its sole artist partner for the entire year with the idea that “over the different seasons we’ll bring new layers of our art program to light,” said Hotel Figueroa Managing Director Connie Wang.

“Shyama’s work is perfect for this year because of the way she explores femininity and the need to rejuvenate ourselves coming into 2021,” Wang said. “Her connection to nature is a theme a lot of us are really exploring in our personal lives, and she brings that to life so well.”

While many of the 14 pieces in Golden’s show are created with oil and acrylic paint, some are digital. One miniature painting from the collection plugs into the wall, allowing the viewer to see the character from multiple angles. Golden calls it “an artifact from another dimension because it feels like something from the future. She’s a space traveler woman, and the artwork moves.”

Golden will add to the collection throughout the year with additional original works, prints, and other pieces that will be highlighted differently depending on the season, all of which will be available for sale. In addition, Golden will help curate the hotel’s 519-square-foot Figueroa Suite, including an experience that will be revealed this summer as Hotel Figueroa approaches its 95th anniversary. “Through its long history and many incarnations, what has remained constant is the focus on community for downtown Angelenos and also this connection with art,” Wang said of the hotel, which already features a number of female artists both indoors and out. “It’s always been a safe haven and place for artistic expression.”

In addition to elevator doors hand painted by local female artists, a mural from English artist Bella Gomez looks as if gigantic tropical flowers are growing up the side of the hotel’s 14 stories. Golden is merely adding to the tradition.