She's both the first woman and the first person of color to helm the strip created by artist and woodsman Ed Dodd and first published in 1946.

"I realized what an opportunity this was, and what it means and can mean for the future," Rivera said. "I've got to be the one to take this over — I have to be the voice of science."

For most of its run, Mark Trail stood among the comics pages as the original champion of nature and wild animals — the eponymous character is a photojournalist and consummate outdoorsman, unafraid of standing up and throwing punches at man and animal alike in the name of environmental justice. Over the decades, the character became the face of outdoors magazines and books, was adapted to a radio serial and had a stretch of national forest land named for it.

But as the years went on, Trail seemed stuck in the 1940s. The strip's realistic style never evolved over the years, even as artists changed from Dodd to Jack Elrod to James Allen. Similarly, storylines fell into a rut — some fans even observed that storylines would be repeated almost wholesale throughout the decades.

In late 2020, King Features Syndicate, which distributes the comic, parted ways with Allen, and began a search for a new artist.

"I think our decision came because, when you look back at Ed Dodd's original work…his real mission was that he wanted to create stylish, engaging art that would draw people in and then surprise! He would teach you science," said Tea Fougner, Rivera's editor at King Features. "It was this fun comic that taught people about the environment in a very modern way. But the issue is if you don't change your modern way of teaching, after a while, your modern way is 50, 60, 70 years old."

Rivera was best known for her webcomic, Love, Joolz, which she describes as a "slice-of-life, but from the angle of a badass woman." It follows a fictional version of Rivera as she unapologetically surfs, snarks, digs into society and explains science. Her art style is generally looser and more expressive than her predecessors but tightens for animal detail and science explainers.

Although Rivera's background is in engineering, she moved to Los Angeles in the mid-2010s to pursue an art career. After years of building up a freelance artist portfolio as a colorist and illustrator, she learned of the Mark Trail opportunity and grabbed on with both hands.

Her test comics drew on Trail's famous Science Sunday strips, which explore animal species and their environments. So what happens in the first panel of Rivera's Mark Trail test strip?

Mark Trail leans toward the reader and says, "we have to talk about Pablo Escobar's drug cartel hippos."

The strip explains that Escobar, the infamous drug lord, had four hippopotami imported to his Colombian compound's zoo — and that all four broke out, rapidly reproduced, and took over the Magdalena River. The art was vibrant, the writing both cheeky and informative. She got the job.

In the months since Rivera took over the strip, she's covered Trail's foundering nature journalism career but also devoted a strip to gardening (one of Rivera's pet passions) as well as one explaining the intersection of climate change and environmental justice.

"I'm originally from the Bronx, and that's the place of the highest incidence of juvenile asthma — it has been for at least 38 years, and that's a huge part of my story. I almost died at the age of one," Rivera said. "This is something that's personal for me. So many people face so much crap because bad guys just want to pollute backyards because they can't do it to the rich white people."

Rivera's Trail's current storyline focuses on how the main character's father forced a Black farmer off of his land by striking an exploitative deal, then using the land for fertilizer runoff.

That Rivera's Mark Trail, the character, has a father is a new wrinkle in the strip's history. Rivera's version of Mark Trail is the fourth in a line of "nature dudes" — a wink to the strip's three previous artists. 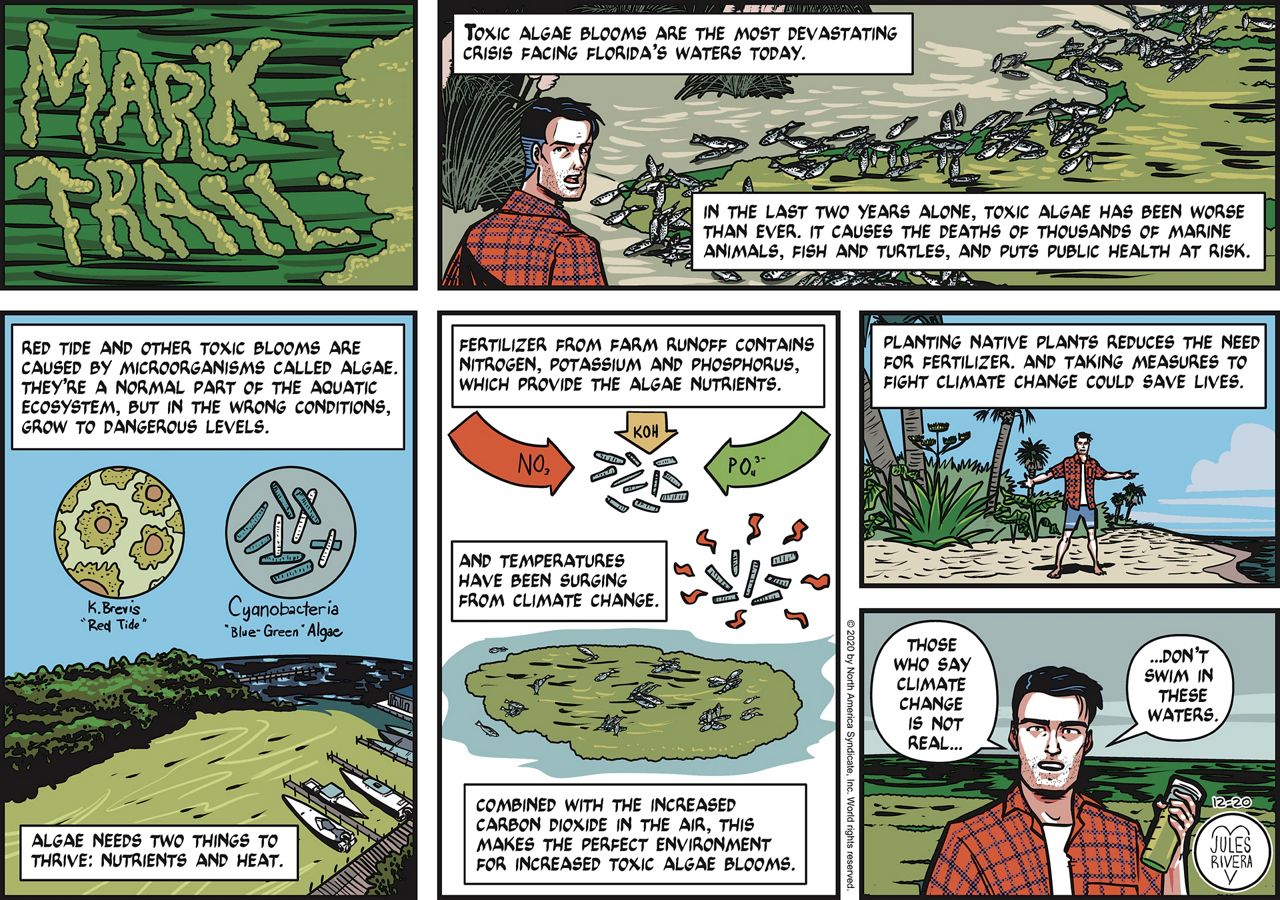 Rivera has also taken pains to flesh out other character histories while pulling the strip into the modern age. Trail's wife, Cherry, has a life and personality of her own, already going on her own adventures. One longtime antagonist has been given a redesign, along with gender-neutral pronouns, while Mark Trail's old employer has become part of a conglomerate's portfolio — his latest assignment is on behalf of "Teen Girl Sparkle" magazine.

The changes have had a mixed response among longtime Trail fans, who have protested everything from character redesigns to Rivera's linework to the storylines.

"A lot of the older fans did not agree with Mark having stubble… he's a mountain man! How many mountain men do you know have clean-shaven baby faces?" Rivera said

But Ed Dodd's friends and loved ones — including his friend, C.B. Hackworth, who runs a company managing Ed Dodd's intellectual property alongside Dodd's widow, Rosemary — have approved of Rivera's work.

"The wonderful thing happening here is that the enduring legacy of Ed Dodd is being kept alive and interpreted by someone who is smart and with it and gets the market she has to reach for the strip to continue to survive," Hackworth said. "It's in her hands, and it seems to me like extremely capable hands."

"But Rosemary does hope Mark will shave once he gets his act together," Hackworth added, laughing.

"(Mark Trail) 's in a very uncomfortable position. When he's uncomfortable, it's going to force him to grow and be a better dude," Rivera said. "So it's good to make your character uncomfortable. If he has everything easy and handed to him, that's not a story, that's wish-fulfillment. Nobody needs that."

But one thing that's going to remain about Mark Trail — the strip and the character — is what Trail, Dodd, and Rivera have in common: on a deep, bedrock level, they care about science, and they care about nature.

"Part of why we love Jules is that she has opinions on nature, and I think that helps, in this case, more than anything else," Fougner said. "I don't think we've had to rein her in on any of the stuff she wants to talk about because that's who Mark Trail is… he's a guy who cares about nature so much that he punches people."