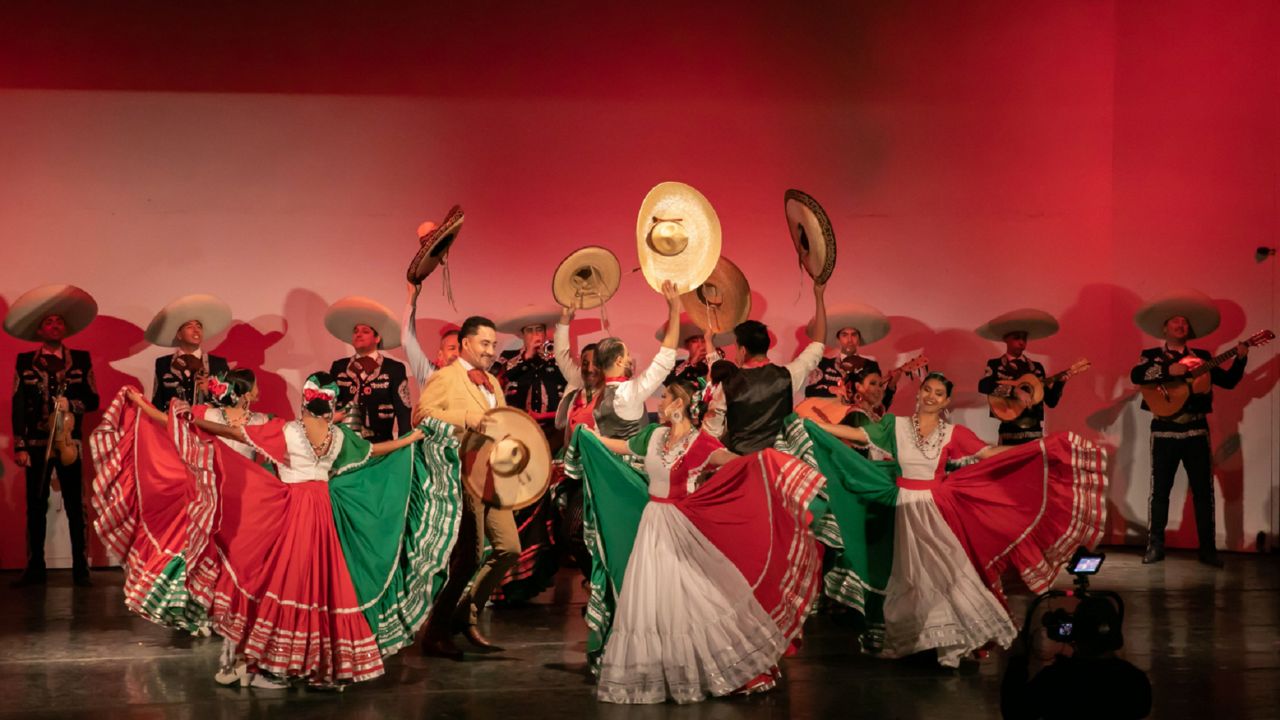 Despite the challenges the pandemic has presented to live performances, hit folklórico show "Nochebuena - Christmas Eve in Mexico" will be streaming online this holiday season. (Photo: Julie Rodriguez 2020)

The Show Goes On for “Nochebuena” Despite Pandemic

MONTEBELLO, Calif. — Jimmy Cuéllar and Kareli Montoya have moved pretty much everything out of their soon-to-be former studio in Montebello. The pair are getting ready to move into a new space in Bell Gardens, where they'll continue to teach the next generation of mariachi musicians and folklórico dancers.

But the couple, who are married, also perform themselves. Cuéllar and Montoya have combined their passions into a show, "Nochebuena - Christmas Eve in Mexico."

“Mariachi and folklórico dancing has always been a huge part of Mexico and so ... our goal is to have it combined together so you get it both worlds in one concert,” said Cuéllar.

Their show has been a hit the last two years, pairing Cuéllar’s mariachi music and Montoya’s folklórico dance, celebrating the festivities of Christmas time in Mexican and Mexican-American culture.

“We have American Christmas here, and some parts of the border and in México it’s very similar to what we do here," said Montoya. "And then every region in México has their own way of celebrating Christmas - ‘Navidad’ - and they all have different rituals and traditions and celebrations. There’s just so much variety, so to create a concert around this holiday is not easy, per se. There’s just so much to choose from, which is nice."

Despite the challenges the pandemic has presented to live performances, the show is going on for “Nochebuena,” streaming online from both the Musco Center at Chapman University and the Carpenter Performing Arts Center at Cal State Long Beach.

For Cuéllar and Montoya, it’s more than a performance. Cuéllar comes from a long line of mariachis and Montoya has been dancing since she was a child. “Nochebuena” is, in large part, their own stories as first generation Mexican Americans born in California.

“What makes this concert special and what we do special is that American perspective, where in a show like ‘Nochebuena’ even singing mariachi songs in English gives us pride,” said Montoya.

Cuéllar and Montoya have known each other since childhood, working together for a long time before dating and eventually getting married. “What’s great is that we hash out a lot. We get out of the way like, ‘that’s not going to work!’ and 'take that out,’" said Cuéllar.

And as Christmas approaches, the thought of their work being seen near and far is a feeling that hits close to home .

“For some people who have been home since the pandemic started, bringing this into their home is going to be very special. And I speak for like my grandmother who’s been home since March. I haven’t seen her since, so she’ll be able to see a little bit of her granddaughter,” said Montoya.