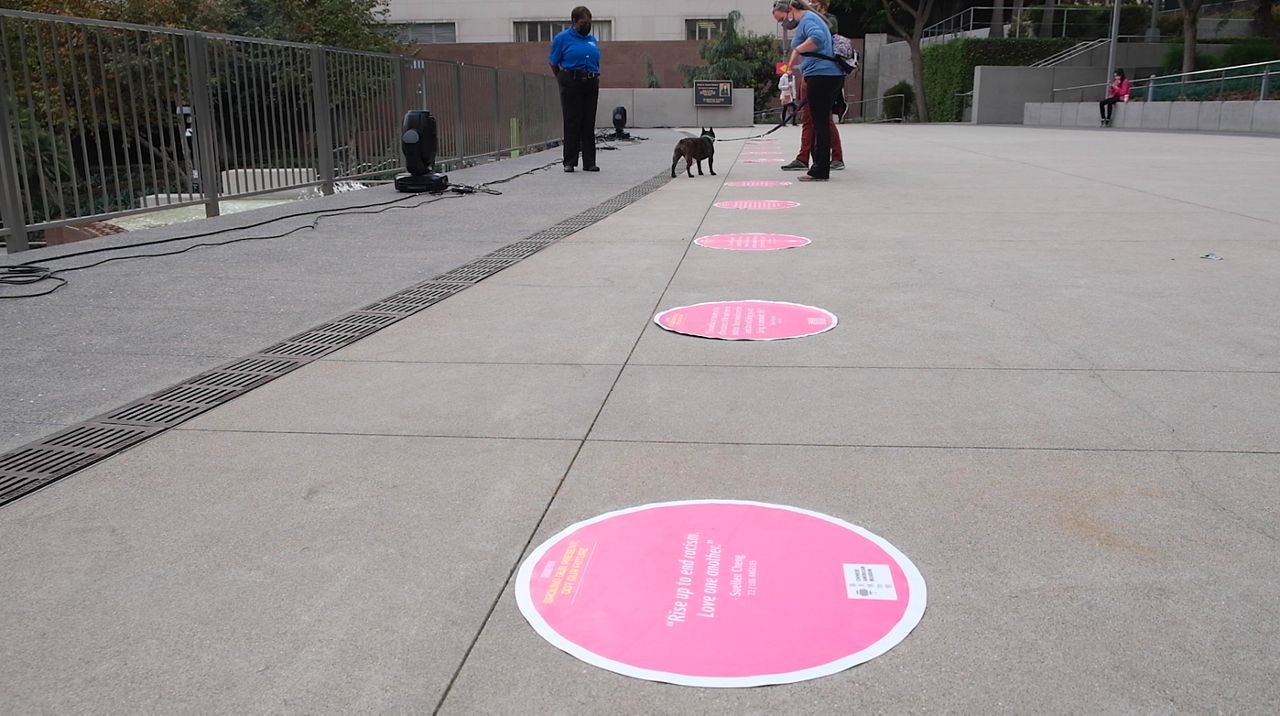 LOS ANGELES — By now, everyone is probably used to the floor decals and info dots we see everywhere, reminding us to keep physically distant during the pandemic. They are now just a part of life. We might even be tuning them out by now, they are so common.

Now, the folks at Grand Park have adopted the idea of the street decal for a new installation project called "Ground Our Present Dot Our Future," in which decals are the medium to deliver quotes from everyday Angelenos and are distributed throughout Grand Park’s walking paths.

Gay Yuen, president of the Chinese American Museum, was one of the community partners who helped pull in quotes from the public.

“To be invited by Grand Park, for them to have the sensibility and the sensitivity to include a diverse group of people, it's very sensitive, and very embracing of them,” said Yuen.

Sixty-three decals have been placed throughout Grand Park, featuring quotes from a diverse collection of Angelenos, the youngest being 8-years-old, the oldest, 88.

Yuen says diversity is on display, not only between communities, but also within, and the challenges of 2020 are of course reflected in the often melancholic quotes. But Yuen said optimism is never far behind, “There's always that uplifting ending to those quotes.”

Grand Park is perhaps the ideal place for this installation as it has served as a crossroads for so many communities over the past year who have gathered here to make their voices heard.

Fatima Dodson, who owns Runway Boutique and is known for her “Headwraps In the Park” events in Grand Park, said her participation in the project was a way of acknowledging survival and resilience. In her case, she put out a call to many voices from the West Adams community for quotes.

“We've seen so much sadness this year,” said Dodson. “So, I feel like to be able to just be here and alive is a gift, and I feel like I'm connecting more with my friends and people I'm working with and just really appreciating the time that we have.”

The installation is meant to encourage reflection as one strolls through the park, nowadays one of the few activities we can still safely do.

“I feel like I can relate to all the quotes,” said Dodson. “I just feel like a lot of people are doing self-reflection and also analyzing what they have in their space and what they can do to make their space safer and peaceful, because right now that's very important.”

And as we look to the New Year, Gay Yuen believes the installation also reflects the hopes Angelenos have for 2021.

“With all these terrible things happening, we also need reasons to celebrate,” she said.

Elevating the voices of our communities, “Ground Our Present Dot Our Future” will be on view throughout Grand Park until January 25, 2021.