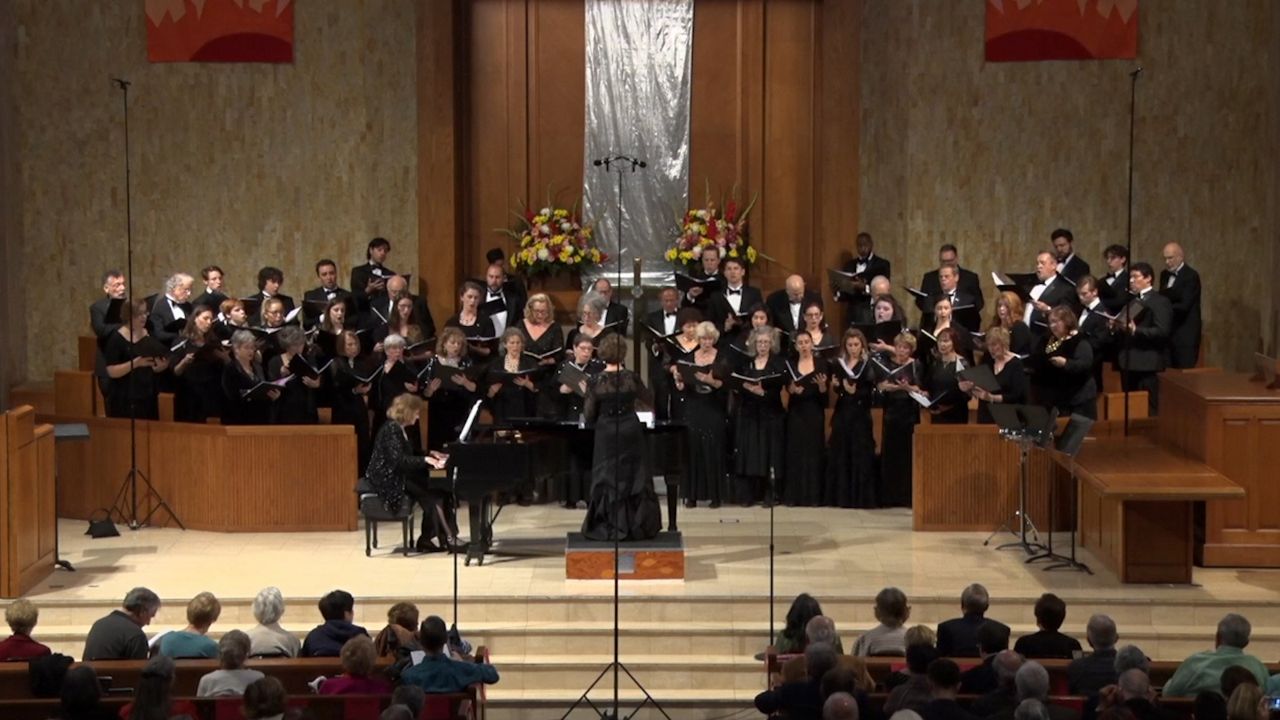 RESEDA, Calif. — Opera singers understand acoustics, but nothing really prepared Sarah Salazar for the experience of hitting a high note in a face shield.

“It’s very weird because it comes back to you,” she explained. “So it feels even more loud.”

Salazar is a soprano with The Verdi Chorus, the only group in SoCal that focuses on chorus pieces. Over the decades, they’ve performed selections from 81 operas in seven languages.

“I might be biased, but it’s the most beautiful music known to man,” Salazar said.

The group is primarily amateur singers but Salazar is one of the pros – a section leader pursuing a career in the art form. She was studying for her master’s degree five years ago when she suddenly got very ill.

“A blood clot which is called a deep vein thrombosis,” she explained, “and it caused my small intestine to die.”

Next came major surgery and weeks in a medically induced coma. She wasn’t expected to survive, but here she is, more determined than ever to pursue her dream.

That includes her elementary students at Kirk O’ The Valley School, a private school in Reseda. They aren’t on campus but Salazar is currently teaching them over Zoom, everything from music theory to ukulele lessons.

The Verdi Chorus rehearses over Zoom as well, keeping their weekly Monday night meetings going throughout the pandemic. Salazar enjoys the online gatherings but admits it isn’t the same. The singers keep their microphones muted so she can’t hear the other voices.  And that’s just part of what’s missing.

“Just being able to, like, see your community members, your friends, your colleagues and be able to talk to somebody face to face, that part is definitely missing,” Salazar said. “I miss that so much.”

Founding Artistic Director Anna Marie Ketchum has been working with Salazar on a concert of Spanish art songs performed by The Fox Singers – the professional ensemble within The Verdi Chorus. The biggest challenge, she said, is the obvious one.

Instead of performing together, the singers went one by one into a recording studio, performing their parts individually, accompanied by pianist Laraine Ann Madden.

Salazar is doing that, too. An opera singer with an underlying health condition, she’s had to take extra precautions to protect herself from the pandemic. She misses the costumes and music and connections that come with performing but she knows this shall pass and when it does she will be ready to once again fill a concert hall with song or continue to connect to audiences online.

“There’s always somebody watching, at least one person and if you can effect that one person you’ve done your job as a musician.”

Amor y Odio, Songs of Spain and the New World, will begin streaming on The Verdi Chorus website on Sunday November 8 at 10 a.m. and will be available through November 22.   The concert is free but audiences are asked to consider making a donation to the group's "Artist Relief Fund."