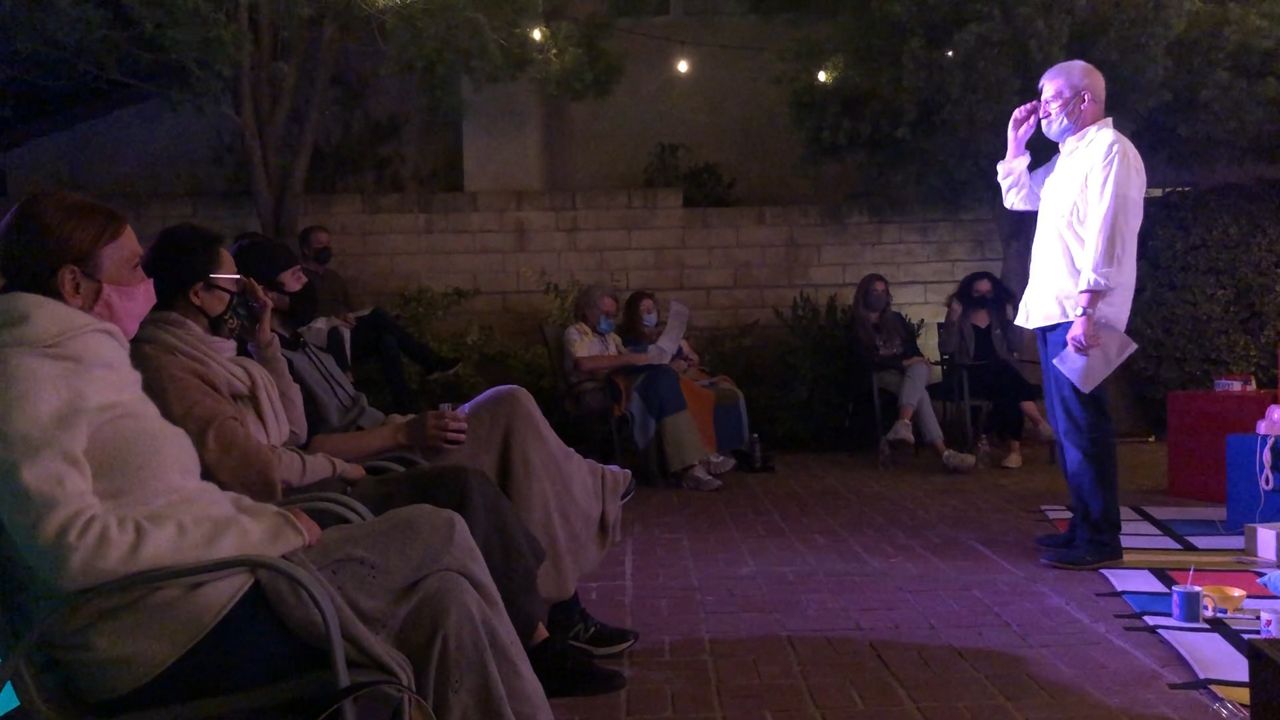 WOODLAND HILLS, Calif. — Tom Dugan is used to welcoming audiences to his plays. He just doesn’t normally welcome them into his own backyard.

‘The audience members will come through the side gate,” he said, demonstrating the way. “Very fancy. Past the garbage cans.”

For several weekends in October and November, Dugan – a playwright who specializes in a historical fiction – has transformed his property into an outdoor theater, complete with lighting, a set, even a makeshift balcony on a riser behind the pool.

“Welcome to the very first performance in Dugan’s Backyard Playhouse,” he told a small but eager crowd.

“It is such a breath of fresh air, so to speak, he said a few days before opening night, “because I’ve been suffering from non-performance anxiety. To not have meaningful work is frustrating in the extreme as everyone can attest to.”

Dugan’s work has been performed in theaters from coast to coast and while he never expected his backyard would become a venue, in a way this is a return to his earliest roots.

“When I was a little kid, yeah, I used to put on shows all the time,” he laughed, “but now we’ve come full circle again.”

His latest show is called Tell Him It’s Jackie, imagines Mrs. Kennedy on the night her brother-in-law Bobby Kennedy was assassinated. Dugan say’s this one-act, one-woman show is a complete reworking of his previous play called Jackie Unveiled which was performed at the Wallis in 2018 starring Saffron Burrows.

In this production, Kait Haire takes on the role of the former first lady.

“What made me say yes is I am an actor who is currently willing to do anything anyone wants,” Haire joked to the audience during a post-opening Q&A.

Performances are limited and so is the size of the crowd. Dugan’s Backyard Playhouse only has 16 seats. “But that’s alright,” Dugan said. “It’s still an audience.

In terms of safety, Dugan, who also directed the show, and Haire are both tested for COVID and the audience will be screened as they arrive.

“Their temp will be taken,” Dugan explained. “Hand sanitizer will be everywhere. The performance is outdoors.”

Everyone except the actress is required to wear a mask and parties will be seated in pods, so no one is next to a stranger.

With such limited seating, Dugan admits this is not a “money making proposition” by any means, but adds, “people are yearning for live performance.”

People like Rose Villasenor, who over the past few decades has never missed one of Dugan's plays. In fact, she often attends opening night and this play was no exception.

“I haven’t seen a show since last fall and my heart aches,” she said. “My soul is empty for a show. I am so happy to be here.”

Dugan is delighted too. It was a lot of work but a lot of fun, he says, getting his backyard ready for the spotlight, and collaborating with fellow theater professionals to design and build the modular set.

This is the way back, he thinks. Small productions in small spaces that nevertheless can create powerful performances for an audience hungry for art.

Tell Him It’s Jackie opened on October 9. It will be performed on October 23 and 24 and November 6 and 7. It’s also been extended with two additional performances added on November 20 and 21. Admission is by suggested donation and reservations are required.  To make a reservation, email Tom.dugan@outlook.com.

With theaters gone dark due to the pandemic, playwright Tom Dugan has transformed his Woodland Hills backyard into an outdoor theater. Space is limited, with just 16 audience members allowed per show. Masks are mandatory and temperatures are taken at the door. Audience members enter through the side gate. “Very fancy. Past the garbage cans,” Dugan said. It may not be the Pasadena Playhouse, but for theater-goers, hungry for the buzz of taking in live theater, it’s been a breath of fresh air. “I haven’t seen a show since last fall and my heart aches,” said audience member, Rose Villasenor. “My soul is empty for a show. I am so happy to be here.” The current show is Dugan’s latest work, “Tell Him It’s Jackie,” which imagines Jackie Kennedy on the night her brother-in-law Bobby Kennedy was assassinated. The show opened on Nov. 9 and will run this weekend and for two weekends in November. Click the link in our bio for more info. 📷: @taralynn_wagner