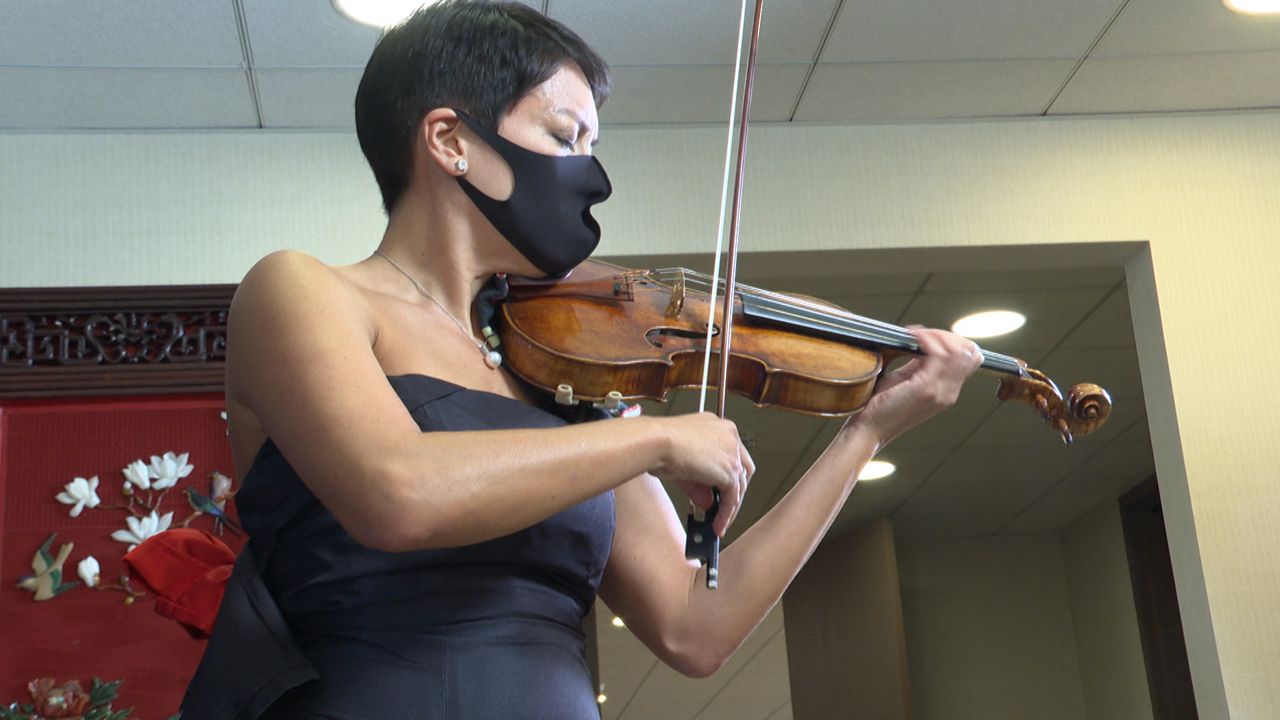 As they took the stage at the Fred Kavli Theatre in Thousand Oaks, members of the New West Symphony donned matching black masks, just one of many safety precautions in place as the musicians performed together for the first time since March.

“I think we are all ecstatic, I have to say,” beamed Maestro Michael Christie.


The experience was a bit different, especially for the musicians, Christie explained. Normally seated elbow to elbow, the players were now separated across the stage, making it harder for them to achieve that delicate goal of playing as one.

“Making the pitch exactly the same, articulating and moving at the same time because they aren’t in pairs — so it certainly was a different dynamic for them," he said.

But despite the challenges, the end result was beautiful and stirring, and Maestro Christie felt it immediately.

“To give that downbeat and have the music start, I think you could just feel everybody just have this quite profound sense of relief actually," said Christie.

“It was really like salve for the soul,” she said. “It’s been a very, very long time of wanting to feel alive again, essentially, and really feel the music course through our veins.”

In addition to playing on stage with members of the orchestra, the world renowned violinist also recorded a duet with koto player Reiko Obata in the private quarters at the Reagan Presidential Library.

The concert being recorded — the first of the symphony’s season of mini festivals — is called "A Tour of Japan," featuring music that Meyers loves to play.

“The color and the technique of Japanese music is so beautiful,” she said, describing how the space is just as important as the notes themselves. “You really appreciate the architecture and the feeling and the mood.”

Meyers been playing this music all her life. Her last concert was back in March in Memphis, and one of the pieces she played there was “Kōjō no Tsuki,” which reminds her of her grandmother.

“That was a request of hers every time I would see her in Japan,” she said. “It’s just so poetic, and much of the Japanese music is very similar in that style and that regard.”


Outside on the lawn, a very different type of Japanese music was performed by the Pasadena-based group, Mokoto Taiko. Artistic Director Hunter Araki Loyd explained, like New West Symphony, his group hasn’t played together since the pandemic began. Even practicing over Zoom has been difficult.

“You know, we can’t be playing these inside our own houses,” he said. “So I have pillows that I use, and some of the other guys have tires.”

New West’s season of performances is called "Global Sounds, Local Cultures" because so many of the cultures being featured in the concerts — India, South Korea, Mexico — are represented in our communities.

Maestro Christie is excited to bring these diverse sounds and instruments into the New West repertoire. He sees music as a unifying force, something he thinks we could all use right now.

“We live in a time when knowing our neighbors is so vitally important,” he said. “As we go through the COVID era, as we go through all the other things that are happening, being able to look at each other with more grace, with more sense of understanding. Any role we can play through that via music, it’s our responsibility."

He looks forward to taking audiences around the world without them having to leave their living rooms.