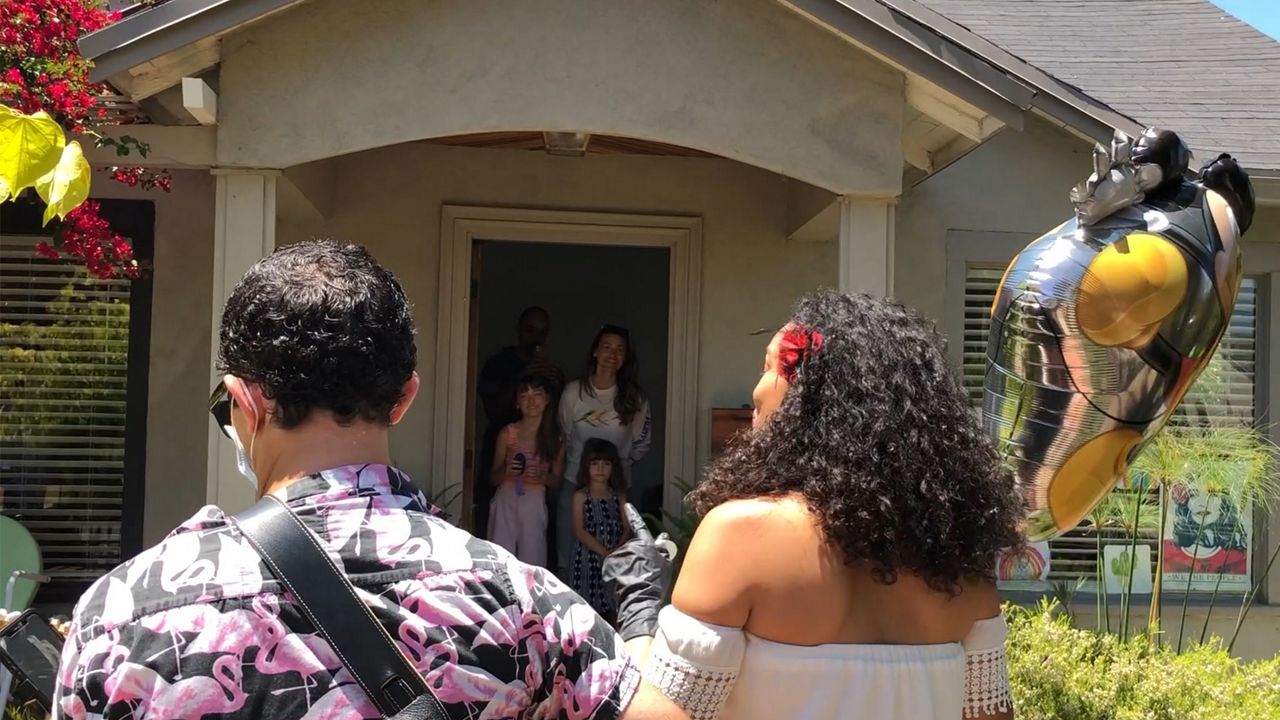 NORTH HOLLYWOOD, Calif. — While the pandemic forced many people inside, it had the opposite effect on Serafia and Daniel Kattan. The couple has been performing for seven years. Mostly at night. Mostly indoors.

But COVID-19 shut those places down and paved the way for them to find a new stage.

They now bill themselves as the Sidewalk Singers. Each gig finds them standing at a safe social distance from their usually unsuspecting audience.

“We came up with this idea just basically out of necessity," she said. "We still wanted to perform and still wanted to do the thing that makes us happy, which is play music for people. It seemed like a perfect way to safely celebrate.”

This is their first foray into what’s essentially singing telegrams and they were hooked right from the start. Daniel Kattan said their first gig was singing for a grandmother who hadn’t seen her family in two months.

Hi! Serafia and Dan Kattan here! We wrote a jingle about who we are and why we donate to the LA Regional Food Bank!!! What do you think!!? @lafoodbank #SidewalkSingers

“She immediately just started crying and was in tears and was so joyful and happy about the whole experience," he said. "It made us realize why we are doing it in the first place.”

They’re doing it for a few reasons. The North Hollywood based duo decided from the beginning to donate half of their performance fees to two causes. They donate 25% of every booking to the LA Regional Food Bank and another 25% to the Save NoHo Theatres campaign. They worry many theaters in their neighborhood may not survive after being closed for months.

“Having those theaters right in your grasp is just so important to keeping the culture of that neighborhood alive," she said.

Each week they post the amount they've been able to give back – more than a thousand dollars so far.

“It’s either sitting home or doing something like this, and we’d rather be able to do this for our community,” Kattan said.

They also are willing to waive their fee entirely and perform for front-line workers, including medical staff, teachers, and grocery workers, for donations only.

And these traveling troubadours said they are just warming up.

“I literally want this be like our new project," Serafia said to her partner. “I think it’s changed both of us.”

Even after clubs reopen, they say they’ll still be out here, delivering smiles door to door and filling the sidewalk with song.