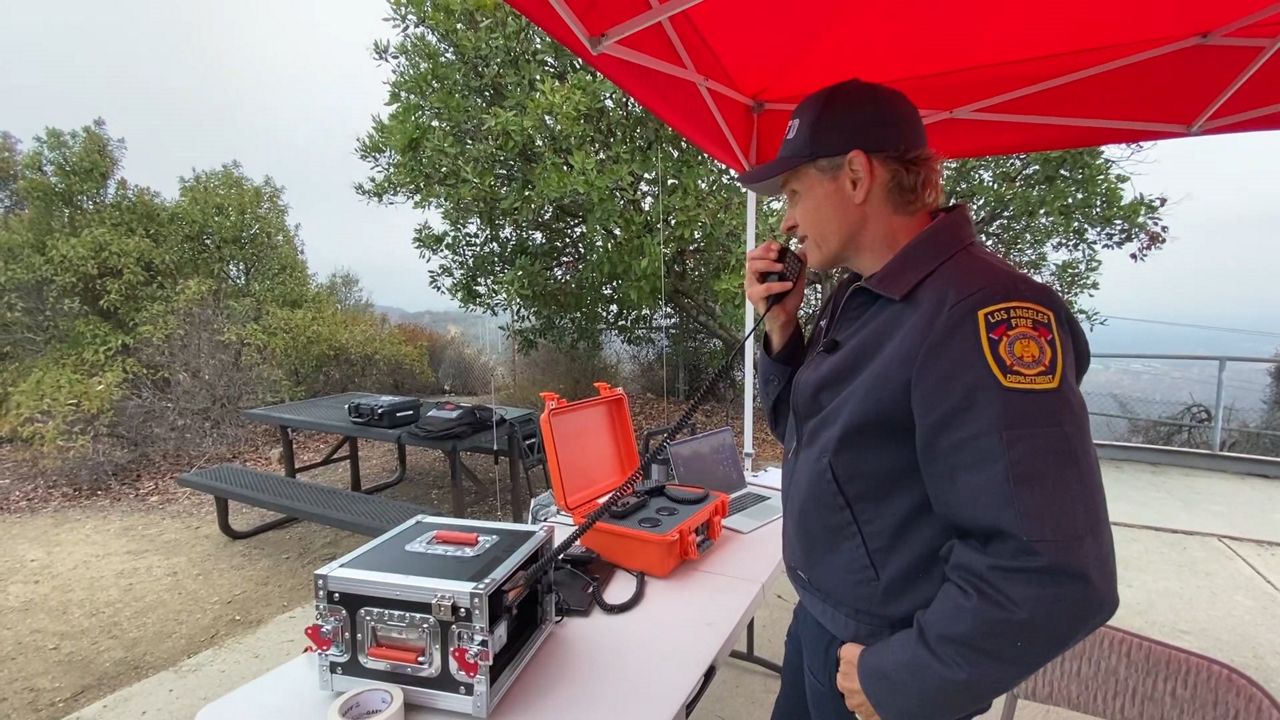 VAN NUYS, Calif. — Preparing for the worst and hoping it never happens — that's the order of the day for Michael Schlenker, who is perched atop San Vicente Mountain Park on a Saturday morning. He is a volunteer with the Los Angeles Fire Department Auxiliary Communications Service, which is comprised of more than 100 amateur ham radio operators spread across four bureaus.

When all else fails during a disaster, they jump into action.

"Cell phone towers will go down, the power will go out and your cell phones will be rendered obsolete for communication," Schlenker said. "If you have a ham radio, you're able to reach out to those in your neighborhood or community."

That is exactly why the group is so valuable to the LAFD for backup communications. On this day, he led a three-hour drill across the Southland, relaying fire and medical calls, just as they would during a disaster.

Schlenker got his operator's license seven years ago, but his passion for radio goes way back.

"My grandfather had a police and fire scanner and so as a kid, we'd sit and listen and listen to all the calls that go out. It was just fascinating to hear that," he said.

LAFD Capt. Michael Horst said the volunteers are crucial, especially while California deals with another devastating fire season. More than 1.8 million acres have already burned this year, and officials warn the state is on track to surpass last year's record of more than four million acres burned.

"The fires are burning longer and hotter because [of] the drought here in California, where it's challenging the fire department resources as well as the critical infrastructure, our cell phone and radio networks," he said.

At the main dispatch center where the fire department takes hundreds of 911 calls every day, Horst said ham radio operators can relay crucial messages if a radio site burns down in the field or if there are prolonged power outages from utilities to reduce the risk of wildfires.

"They can actually sit down at a console. Our dispatchers can send them messages, try to request updates," he said.

Out in the field, ham radio operator Bill Coss has spent almost 20 years volunteering with the fire department's auxiliary communications service. For him, it's about helping out fellow residents during an emergency.

"Trying to be prepared for any type of situation that might arise, typically it's an earthquake and trying to support the community," he said.

Schlenker and other operators jumped into action during the 2017 Skirball Fire, which impacted his neighborhood in the Santa Monica Mountains, helping residents evacuate and get to safety.

"To be sitting at home watching the aerial shots on TV and then looking out the window and seeing it for real, just the anxiety, your adrenaline level really increase," he said. "Luckily where I live, the fire was blowing in a different direction and away from us, so we knew we were not in the threat of the fire path."